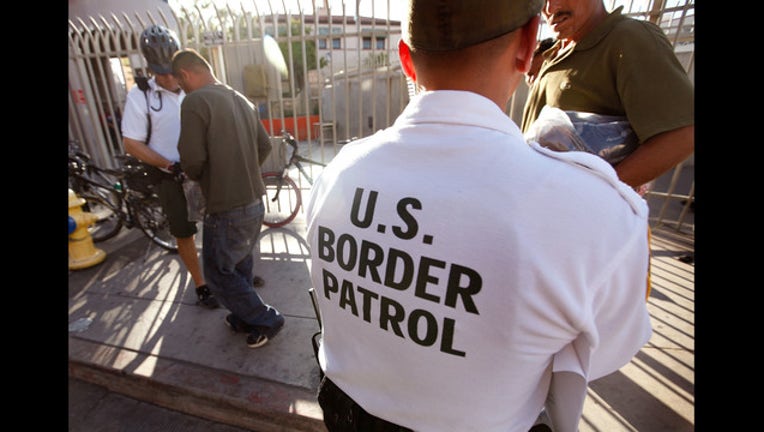 An U.S. Customs and Border Protection bike patrol agent assists Mexican's being returned to Mexico after they were apprehended for entering the United States illegally June 2, 2010 in Nogales, Arizona. (Photo by Scott Olson/Getty Images)

DALLAS (AP) -- FBI officials said Wednesday that the investigation into the November death of a U.S. Border Patrol agent has yielded no evidence that there was a "scuffle, altercation or attack" more than two months after President Donald Trump and others used the suggestion of an attack to promote the building of a wall along the U.S.-Mexico border.

Investigators have conducted more than 650 interviews and involved 37 field offices in their probe, but have not found definitive evidence of an attack, the FBI said in a statement. The investigation will continue and the reward of up to $50,000 for information that closes the case will remain.

"To date none of the more than 650 interviews completed, locations searched, or evidence collected and analyzed have produced evidence that would support the existence of a scuffle, altercation, or attack on November 18, 2017," said the release from the El Paso office of Emmerson Buie, a special agent in charge.

Rogelio Martinez died from injuries he sustained while he and his partner were responding to reports of unknown activity the night of Nov. 18 near Van Horn, a Texas town near the Mexico border about 110 miles (175 kilometers) southeast of El Paso.

Martinez's partner radioed for help before both agents were airlifted to the hospital, where 36-year-old Martinez died a few hours later. The partner-- who suffered from head injuries-- was released from the hospital after several days, but told investigators he could not remember the incident.

The FBI release Wednesday noted that a dispatcher, who was among the people interviewed by investigators, took the call from the surviving agent. According to the release, the dispatcher wrote in his log that, "(He) thinks they (both agents) ran into a culvert."

An autopsy report from the El Paso County medical examiner's office released Tuesday night shed little light on what caused the serious injuries that Martinez suffered. The report listed "blunt force trauma" as the cause of death, but said the manner of his death was undetermined.

Dr. Janice Diaz-Cavalliery, assistant medical examiner, found that Martinez had a skull fracture, a fractured eye socket, multiple rib fractures and a broken collarbone, according to the 11-page report. She found brain hemorrhaging but no other internal injuries.

A Border Patrol union, the National Border Patrol Council, has previously said the pair was attacked and struck with a rock or rocks. Messages left with representatives of the group were not immediately returned Wednesday.

Trump, Sen. Ted Cruz and Texas Gov. Greg Abbott also have said the two were attacked, with Trump using the incident to renew his call for a border wall between the U.S. and Mexico.

Trump has repeatedly linked immigration to criminality in making his case for tighter border security. Earlier this week, Trump called on Democrats to "get tough" on immigration, citing the death of Indianapolis Colts linebacker Edwin Jackson, who was killed in a suspected drunken-driving crash involving a Guatemalan citizen living illegally in the U.S. Manuel Orrego-Savala was charged Wednesday with two counts each of causing death while driving intoxicated and leaving the scene of an accident.

Investigators had looked into tips about several persons of interest including two in New Mexico. While other charges were filed against several individuals, none of those charges are related to Martinez's death, the FBI release said, adding that they are not "currently a subject in the investigation."