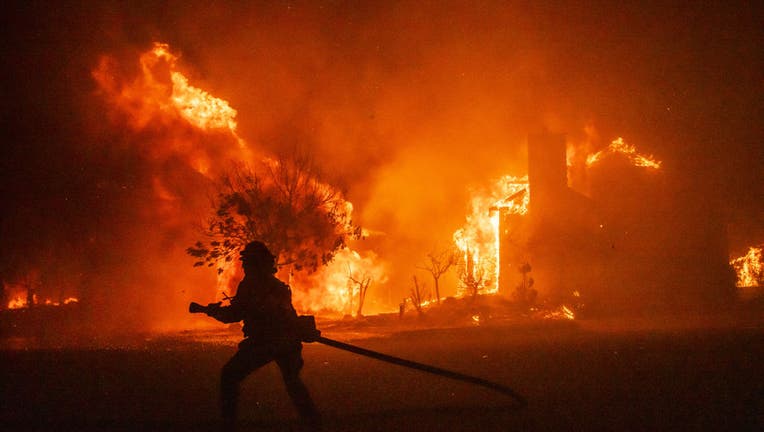 Bloomberg Best of the Year 2020: A firefighter carries a hose as buildings burn in the Skyhawk Park neighborhood of East Santa Rosa during wildfires in Sonoma County, California, U.S., on Sunday, Sept. 27, 2020. Photographer: Philip Pacheco/Bloomberg

The Infrastructure Investment and Jobs Act invests $7.5 billion in wildfire mitigation and forest health and rehabilitation, and $3.4 billion is designated specifically for wildfires. The $3.4 billion will increase firefighter salaries and includes numerous prevention measures including hazardous fuel mitigation - measures that could help prevent the kind of devastating wildfires that ravaged the North Bay in recent years.

Saturday's event was held in Santa Rosa's Coffey Park, a neighborhood that was devastated in a matter of hours by the 2017 Tubbs fire. U.S. Reps. Jared Huffman, D-San Rafael and Mike Thompson, D-Napa, said the funding will help prevent such fires.

Pelosi said to Coffey Park neighbors gathered at the event, "This community's extraordinary resilience to build back from the ruins has been an example to the country. You are of national significance."

The specific amount of money that will come to the North Bay is not yet available, according to a top Thompson aide. Funding was put into several different accounts that will each be distributed through different formulas, so there is no specific estimate as to how much of the money will go to California at this time, the aide said.

However, California is "very well situated" to receive substantial resources out of the $7.5 billion national investment, the aide said.

California is already expected to get significantly increased investments. For example, of the $1 billion made available for wildfire defense grants, California is expected to receive at least $84 million, according to the aide.

The $3.4 billion designated specifically for wildfires includes investments such as: