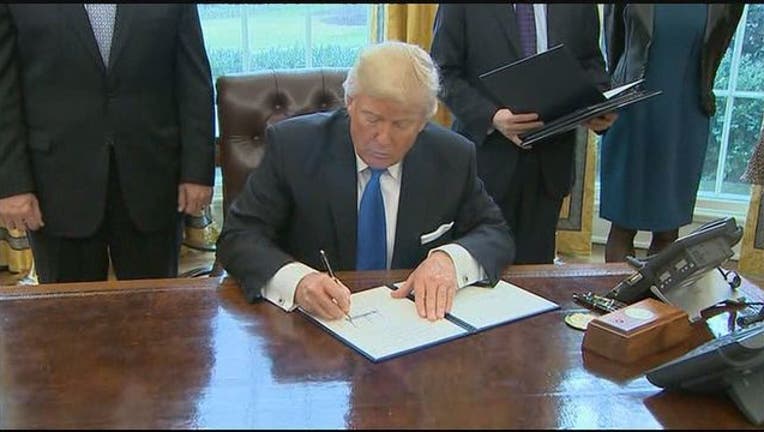 U.S. District Judge William Orrick in a late-afternoon order granted the Justice Department permission to file a motion for reconsideration and then said the motion itself, which the agency submitted Monday, is officially filed as of today.

Today was the 28-day deadline for the government to seek reconsideration of the preliminary injunction Orrick issued on April 25 in two lawsuits filed by Santa Clara County and San Francisco.

But Orrick today made no promises as to whether he will change or withdraw the preliminary injunction, as requested by the government. He said he will consider the two local governments' opposition to such a move after they have submitted more detailed arguments by June 6.

Orrick's nationwide injunction temporarily blocked, until a full trial is held, a Jan. 25 executive order by Trump that threatened to deny federal funding to cities and counties deemed to be "sanctuary jurisdictions"
shielding undocumented immigrants from deportation.

Orrick said last month that it would be unconstitutional for the executive branch to attach new, retroactive conditions on federal funds because the Constitution gives Congress authority over spending.

He also said the "plain language" of the order together with comments by Trump and other officials indicated that the funding threat applied to all federal money granted to a particular city or county.

In the motion submitted Monday evening, the Justice Department argued the judge's concerns were alleviated by a memorandum issued by U.S. Attorney General Jeff Sessions earlier Monday that narrowed the scope of the executive order.

Sessions' memo said the funding threat applies only to certain Justice Department and Homeland Security Department grants, not to all federal funding, and only to noncompliance with an existing law.

That law bars local governments from restricting their employees in providing immigration officials with information about individuals' immigration status.

The government's motion asked Orrick to either clarify or revoke the preliminary injunction.

Santa Clara County and San Francisco both filed papers at midday today urging the judge not to allow the motion, arguing that it was filed too close to the deadline and contained "nothing new" in the law or facts of the
case.

They contended Orrick had already considered the Justice Department's narrower interpretation of the executive order at a hearing last month and rejected it on the ground that the broad wording of the order did not support that interpretation.

Normally, a party seeking reconsideration of a federal court ruling must first obtain leave to file a motion for reconsideration and then must file the motion. The two counties said the government was not diligent
in waiting 27 days to submit its request.

Orrick said in today's order that neither he nor the two local governments had enough time to evaluate the government's request by today's deadline, and that he was allowing the filing to avoid a procedural
complication.

"I am reluctant to reach a substantive decision on the government's motion for leave on such short notice," the judge wrote, and said he will consider the local governments' opposition after they have filed
more detailed briefs in two weeks.

John Cote, a spokesman for San Francisco City Attorney Dennis Herrera, said, "This was a procedural ruling that simply allows the Department of Justice to file its motion.

"We now have the opportunity to brief the substantive issues and we are confident we will prevail on that," he said.

Santa Clara County Counsel James Williams said in a statement today, "Attorney General Jeff Sessions' memo does nothing more than put the Department of Justice's losing arguments from the (April) hearing into
writing.

"It shows that the Trump Administration continues to scramble in an attempt to save an executive order that is fundamentally unconstitutional and cannot be cured," he said.