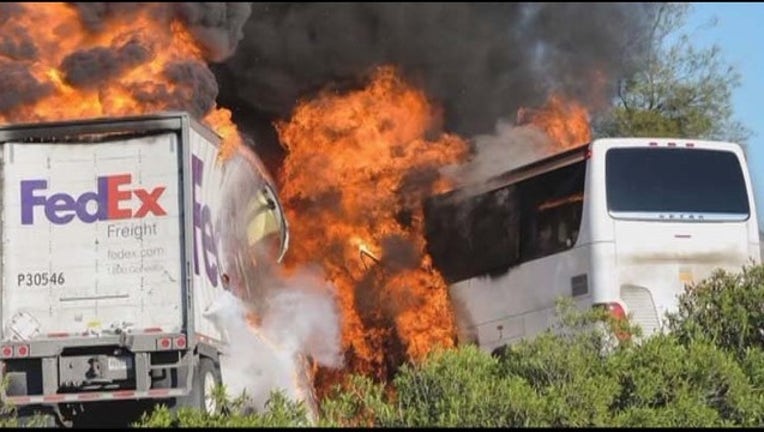 SACRAMENTO, Calif. (AP) — Federal safety officials on Tuesday urged commercial buses to have more clearly labeled emergency exits and safety briefings similar to those on planes after their investigation of a deadly collision in California in which a tractor-trailer slammed into a bus full of students.

Dozens of students struggled to escape the burning, smoke-filled bus after the FedEx truck veered across an interstate median about 100 miles north of Sacramento and struck it head-on April 10, 2014. Both drivers, five students and their three adult chaperones died.

National Transportation Safety Board investigators determined the truck driver, 32-year-old Timothy Evans, losing control was the probable cause of the crash, but they couldn't conclude why. The agency said the driver's actions weren't consistent with him falling asleep, but may suggest he had a seizure or fainted.

The federal investigation also found that students struggled to escape from the bus because of poorly labeled exits and no safety instructions as required by the bus company's policy.

The four-member NTSB at its meeting in Washington, D.C., voted to urge regulators to improve emergency exits and add fire-resistant materials to buses so it is easier for passengers to survive crashes.

Board officials said buses should have the path to emergency exits light up after crashes and a black box-style data recorder, while drivers should offer safety instructions as flight attendants do.

The bus driver on the first leg of the California trip told investigators he did not show a six-minute safety video at the start of the trip, according to NTSB records.

More than half of the 29 students interviewed did not know which windows were designated as emergency exits, and some shattered other panels to escape. Those who climbed out had to drop 7 feet.

The NTSB is urging new buses to have second doors that double as easier escape options, as is standard in Europe.

The bus was equipped with seat belts ahead of a federal mandate taking effect next year, but not all students were wearing them.

The bus exploded into flames after the crash, and at least two passengers died of asphyxiation. Board officials said decades-old standards for vehicle materials withstanding fires should be updated because they treat a four-passenger sedan the same as a double-decker bus and don't take into account fires ignited by crashes.

Victor Parra, president and CEO of the United Motorcoach Association, said some of the NTSB's safety recommendations may make sense, but should be backed up by science showing they'll make a difference.

"Buses are the safest way to travel on the nation's highways, bar none," said Parra. "We have plenty of exits now; it's a matter of making passengers aware of what they are and how they use them."

The bus in California's crash was carrying 44 students from Southern California for a free tour of Humboldt State University. Many were hoping to be the first in their families to attend college.

FedEx and the bus company, Silverado Stages Inc., are facing lawsuits from survivors of the crash and families of the victims.

FedEx did not comment on the NTSB's findings, and Silverado Stages CEO John Busskohl did not immediately respond to an email and calls.