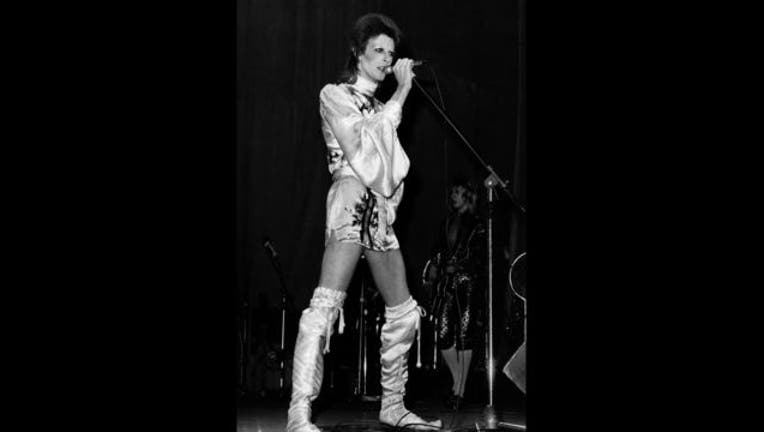 David Bowie in concert at the Hammersmith Odeon, London, during the last performance he made in the guise of his character Ziggy Stardust. (Photo by Graham Wood/Getty Images)

NEW YORK (AP) -- After British filmmaker Francis Whately captured David Bowie in his 2013 film, "David Bowie: Five Years," he thought documenting the life of his musical hero was complete. Turns out he was mistaken.

The end of Bowie's life was equally interesting to Whately as he centers on the artist's final projects in the new HBO documentary, "David Bowie: The Last Five Years." It started airing this week, which marks two years since Bowie died at age 69.

"It was only after his sort of untimely passing that the BBC approached me again and said, `Would I do another film?' And initially I was wary of doing anything else because I felt I'd already made a film, while not being completely definitive, did look at the key years of his career certainly up to the 1980s," he said.

The first documentary covered five significant years in Bowie's career, which included the creation of Ziggy Stardust in 1971 and his 1983 commercial success, "Let's Dance," but Whately found something intriguing about his later days.

"A period of his life that was of the most interest was those last five years when he returned after his heart attack from some kind of seclusion and ... (was) back in the spotlight in some way even though he didn't give any interviews," Whately said.

The second documentary focuses on Bowie's final two albums -- "The Next Day" and "Blackstar" -- as well as the stage play "Lazarus," which took its inspiration from the 1976 film, "The Man Who Fell to Earth," which starred Bowie.

"Lazarus" made its debut weeks before Bowie died in January 2016. The score consists of the artist's music throughout his career, including selections from his last two albums.

In the music video for the song "Lazarus" from his final album, Bowie seems to foreshadow his own death. He's shown lying in a bed with his face in bandages and with coat buttons for eyes. The video, directed by Johan Renck, was shot after Bowie learned he had terminal cancer and decided to end treatment.

Whately said the music video can be construed as Bowie saying goodbye, but when it comes to the stage play of the same name, "I don't think it's that simple."

"The subject matter is interesting, but does it prophesize that this was his way of saying goodbye? I'm not sure it does," he said.

Whately contends the idea of a stage play of "Lazarus" was something Bowie had considered since the beginning of his career.