Over 16,000 firefighters are battling the blazes.

SAN FRANCISCO - Firefighters in Northern California were taking advantage of cool weather Saturday to build more containment lines on massive blazes ahead of warmer temperatures forecast to start over the weekend.

Fire crews working on a fire complex — a group of fires — in wine country had contained 42% of it Saturday morning, up from 35% on Friday night, the California Department of Fire and Forestry Protection said in a statement.

The wildfires burning in the rugged hills north of San Francisco have scorched 583 square miles, destroyed more than 1,000 homes and other structures and killed five people.

Nearly 2,800 firefighters are battling the blazes ignited by lightning 12 days ago.

“Growth is stagnant, the fire isn’t moving at this point (firefighters are working hard to keep it this way),” Mike McGuire, a state senator who represents the area, tweeted Saturday.

A Saturday morning marine layer brought cooler temperatures and higher humidity to much of the San Francisco Bay Area but temperatures were forecast to start rising Sunday with highs in the 90s for some inland areas most of next week. 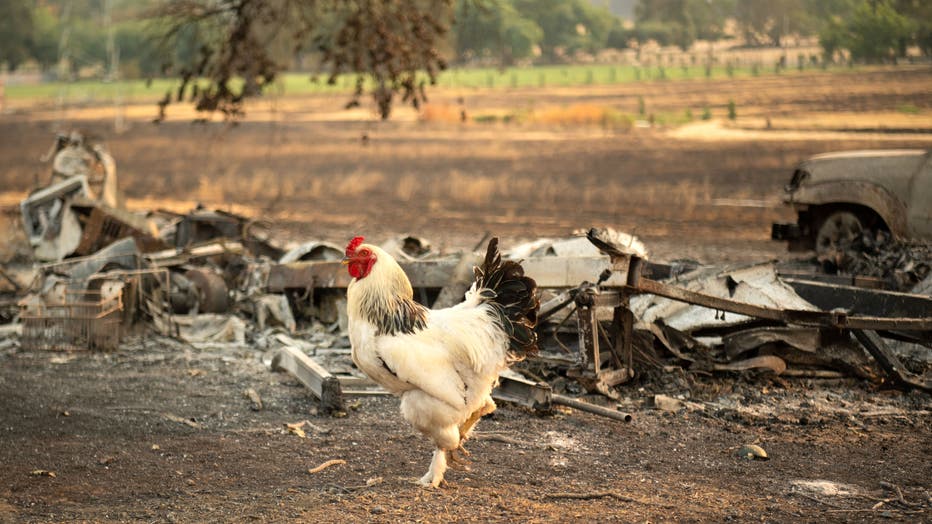 A rooster walks by a burned vehicle during the LNU Lightning Complex fire in Vacaville, California on August 24, 2020. - Thousands of firefighters made small progress on August 24 as they battled to contain historic wildfires in California, with pote

The National Weather Service issued a fire weather watch for exposed slopes and ridges above 1,500 feet in interior Del Norte County and the far northeastern end of Humboldt County starting at 5 p.m. Sunday and through 11 a.m. Monday.

“Over the next week or two we will be at the climatological peak of fire weather season in northwest California, and fuel conditions are near or exceeding critical thresholds over much of our area,” the weather service said.

Around the state, hundreds of wildfires — coming months earlier in the season than expected — have killed at least seven people, burned more than 2,000 square miles (5,200 square kilometers) and pushed firefighter resources to the breaking point. Two blazes in the Bay Area are among the largest wildfires in recent state history.

To the south of San Francisco, evacuation orders for more than 20,000 people were lifted in San Mateo and Santa Cruz counties, where a massive blaze caused by lightning was 29% surrounded, fire officials announced.

The fire has burned at least 575 homes. But the tally could rise, and about 52,000 people remained under evacuation orders.

In the eastern San Francisco Bay Area, a fire that has burned in seven counties and is among the three largest in recent state history was 40% surrounded. The blaze has destroyed about 585 square miles, Cal Fire said.