A former Vallejo police officer, who fatally shot a Black man riding a bike two and a half years ago, detailed the killing in a sworn deposition, while also describing apparent soft-handed investigations by police and prosecutors.

VALLEJO, Calif. - A former Vallejo police officer, who fatally shot a Black man riding a bike two and a half years ago, detailed the killing in a sworn deposition, while also describing apparent soft-handed investigations by police and prosecutors.

Attorneys and family members of Ronell Foster, who was killed in February 2018, now want the Solano County District Attorney’s Office to reopen the case against Ryan McMahon, in light of his testimony in a now-resolved civil case.

McMahon contended the killing was in self-defense after Foster, 33, grabbed his flashlight.

“We made him – forced him – to answer our questions head on and to reenact what he said supposedly took place,” said Adante Pointer, a civil rights attorney representing Foster’s family. “That’s information the district attorney didn’t have. I would think she would want to have it.”

McMahon did not invoke his Fifth Amendment right against self-incrimination in the more than hour-long video-recorded deposition obtained by KTVU. He sat down for the interview in February after the Solano County District Attorney’s Office cleared him in the killing the month before.

The City of Vallejo settled the case in September for $5.7 million – one of the largest payouts for a police killing in Bay Area history.

The deposition video is the first time the public is hearing the officer explain the controversial shooting in his own words.

New Vallejo Police Chief Shawny Williams fired McMahon earlier this month for his involvement in the Foster killing as well as the fatal shooting one year later of Willie McCoy, who was asleep in a Taco Bell drive-thru with a gun in his lap.

Paul Sequeira, chief deputy at the Solano County District Attorney’s Office, told KTVU that the office will review the transcript from the civil case.

He said the office "will always look at new evidence" and put it in the context of the officer's initial statement to see if there's a difference.

McMahon's attorney did not respond to requests for comment.

McMahon killed Foster, a father of two, after chasing him into a dark alley on the 400 block of Carolina Street.

He said he stopped Foster, who didn’t have a light on his bike, to educate him about traffic safety. When Foster ran, he gave chase, and shocked him with a stun gun. The two grappled on the ground and McMahon continued to shock him before striking him with a flashlight, which Foster grabbed.

Moments later, McMahon fired seven shots, some of which hit Foster in the back.

“I assessed in my head, ‘Hey, this guy took my light, he’s going to hit me with my light’ and the next thing I knew I was shooting,” McMahon said.

He described the killing as a “reaction” based on his training, adding “It wasn’t something that was like, ‘Hey, I’m going to pull my gun out, and I’m going to shoot this guy.’”

Pointer said that McMahon’s story doesn’t add up. He said Foster only grabbed the flashlight to protect himself from the volley of blows.

“What Mr. Foster did is what anyone would do in a similar situation like that when you are mercilessly being beaten to death,” he said.

But while McMahon said the killing was in self-defense and part of his training, Vallejo police officials found that he had acted out of policy in the incident.

He failed to turn on his body-worn camera before the encounter. The altercation was still captured on a shaky video that was in buffer mode and had no sound.

But more significantly, officials found McMahon violated policy by failing to radio dispatch that he was pursuing Foster and call for backup rather than chase him into the alley.

An internal probe by the department initially cleared McMahon in the shooting, but it was overturned by former interim chief Joe Allio.

Pointer said that the investigations into the killing by the department and the district attorney’s office were insufficient.

McMahon described the interviews with police and prosecutors during his testimony.

Asked if he had contact with investigators from the district attorney’s office, McMahon said, “They were there that night to investigate, but besides that, no.”

The police department even defended McMahon in the shooting, releasing a heavily edited video of the body-worn camera footage that purported to show things that were not necessarily on video. The footage was slowed down and text was added.

McMahon also revealed that he was never interviewed for a separate administrative investigation that initially sought to clear him.

“Nobody ever talked to me like a chief or anybody like that about an administrative review,” he said.

McMahon was placed on two weeks paid administrative leave, which is standard, and immediately returned to active duty before any investigation was complete. 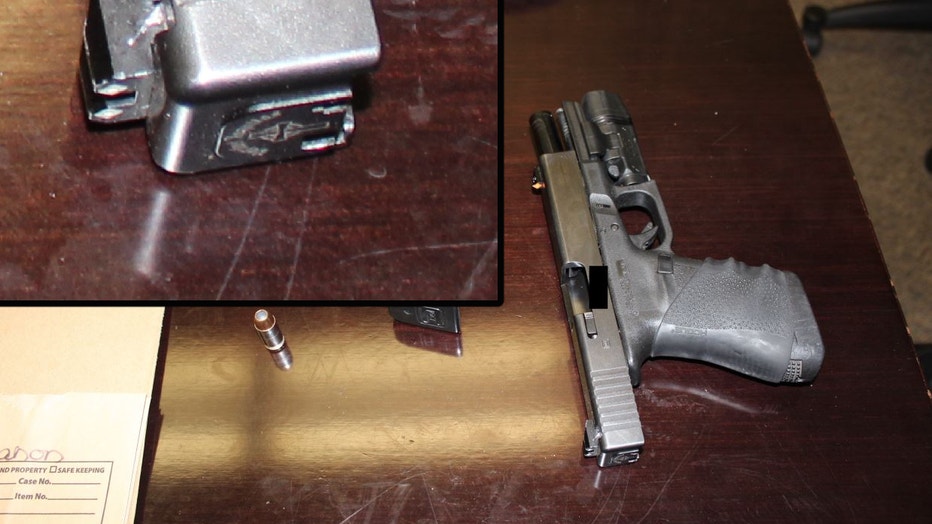 A plate on the back of former Vallejo Officer Ryan McManon's gun reads "Veritas Aequitas" or truth and justice. McMahon used the gun in two fatal police killings.

One probe was looking into whether a plate on the back of his gun reading “veritas aequitas” with a Celtic cross was a nod to the film Boondock Saints. In the film two brothers commit vigilante street justice by killing criminals.

McMahon denied ever having seen the film and said the words were meaningful to him as an Irish Catholic.

Without being exposed by the civil case, it's likely the revelations about McMahon's gun would have ever come to light. In California, many police records of misconduct and details of investigations are protected.

A recent police transparency law known as SB 1421, though, now allows some records to be public. But only records where an officer fired a gun or used force that resulted in injury, committed sexual misconduct or engaged in dishonesty are releasable.