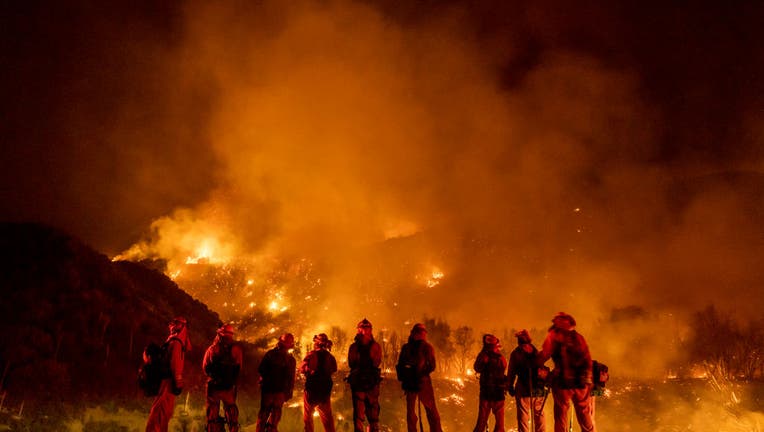 (Photo by Kyle Grillot for The Washington Post via Getty Images)

SAN BERNARDINO, Calif. - A firefighter has died battling a wildfire in California that was sparked by a smoke-emitting device used to reveal a baby’s gender, a factor that will surely affect the couple who hosted the gathering to determine the sex of their unborn child.

The death occurred Thursday in the San Bernardino National Forest as crews battled the El Dorado Fire, the U.S. Forest Service said in a news release. Cal Fire Capt. Bennett Milloy would not identify the firefighter on Friday or say what agency he or she came from. As of Friday, the coroner had not publicly identified the firefighter.

“Our deepest sympathies are with the family, friends and fellow firefighters during this time,” spokesperson Zach Behrens said in the release.

Milloy also said that the death, the only one so far as a result of this El Dorado Fire, will also change the nature of the criminal investigation of the couple who hosted the gathering on Sept. 5  in the El Dorado Ranch Park in Yucaipa. Now, that someone has died, the San Bernardino Sheriff will take over that part of the investigation.

As of Friday, the sheriff had not arrested anyone.

The couple had brought a small group of people to a field, good for photo ops, to set off a machine that spewed either blue or pink smoke to reveal the gender of the baby. The smoke, set off in the grassy field on a hot day, sparked the fire that has now burned more than 19,000 acres and was about 66% contained, according to Cal Fire.

Once that is done, a report will be forwarded to the District Attorney for review and possible charges. Milloy said that in general, a charge that could be brought, aside with starting a fire and destruction of property, is some type of manslaughter charge.

There are surveillance photos of the fire, including the color of the smoke the pyrotechnic device emitted, but Milloy said he would not share that because the case is still under investigation.

Lightning storm, easterly wind: How the wildfires got so bad

Shortly after the fire began, San Bernardino County District Attorney Jason Anderson issued a statement saying he was aware of the community’s concerns about how the fire started.

“If investigative reports are filed with our office, we will review all facts, evidence, statements, and reports to determine what criminal charges, if any, need to be filed,” Anderson said.

A California woman who made the gender reveal parties popular has asked that people do not host these type of parties anymore.

This is not the first gender reveal pyrotechnic party that has gone awry.

In 2017, a massive Arizona wildfire was accidentally started by an off-duty Border Patrol agent who shot a target filled with an explosive blue powder. The fire burned 47,000 acres and caused $8 million in damages, Agent Dennis Dickey was charged with a misdemeanor and sentenced to five years probation He was also ordered to pay $8.1 million in restitution.

Last year, a homemade explosive used to reveal a baby’s gender killed 56-year-old Pamela Kreimeyer in Knoxville, Iowa. The device was meant to spray powder but instead blew up like a pipe bomb. Kreimeyer, who was standing 45 feet away, died instantly when debris struck her head.

Throughout the state, wildfires have burned more than 3 million acres in California this year and are blamed for at least 25 deaths. Most of the fires were started by lightning strikes.