LOS ANGELES - A transient staying beneath a "massive" hillside tree in Echo Park was trapped for nearly 30 minutes on Monday when it toppledover following a night of heavy rainfall, bringing down energized electricwires and significantly damaging an adjacent duplex.

The storm brought a big tree down Monday morning-- not only trapping a man, but also damaging a home.

Rescuers were called just before 8 a.m. to 1332 Laveta Terrace, Brian Humphrey of the Los Angeles Fire Department said. The first firefighters to show up stabilized the trapped man and used a chainsaw to cut a rescue path and lessen the weight on him.

The person trapped appeared to be responsive when firefighters were attempting the rescue. 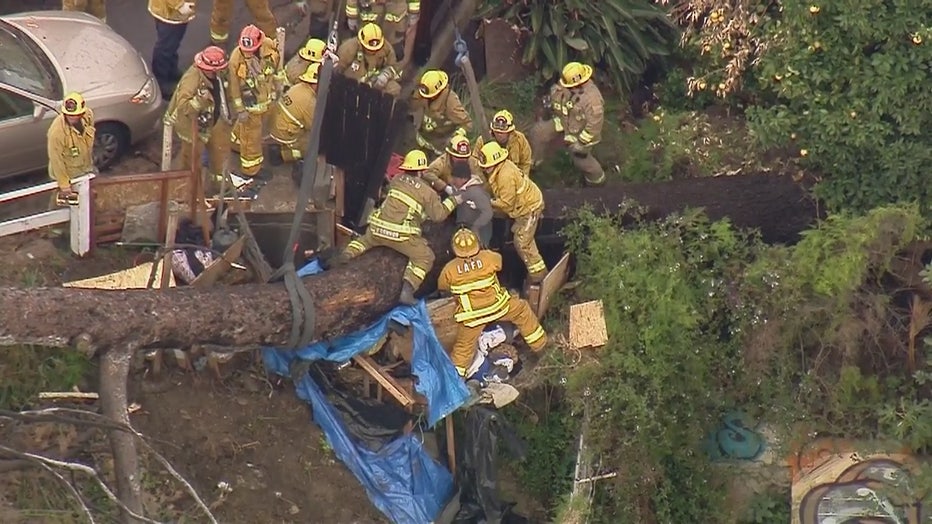 Additional firefighters, including those specializing in urban search-and-rescue operations, arrived to deploy a 50 ton-capable extended boom to lift the tree off the man, who "amazingly sustained only a minor injury" and declinedto be taken to a hospital, according to Humphrey.

He said the Los Angeles Department of Building and Safety was sent toassess damage to the duplex, where three residents were displaced -- a man andwoman in a unit that was red-tagged, and a man who lives in the other unit, which was yellow-tagged.

The residents declined assistance from the American Red Cross, according to the LAFD.

The tree also knocked over utility wires and struck a building, according to LA City Fire.