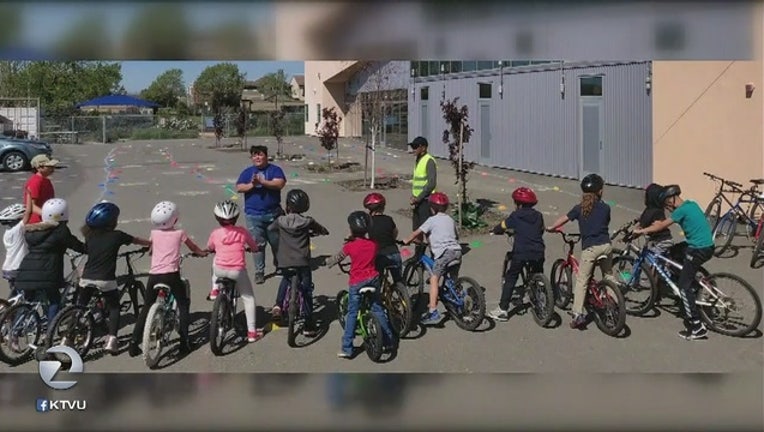 ALAMEDA, Calif. (KTVU) - An Alameda nonprofit had thousands of dollars worth of bikes and helmets stolen from outside an elementary school.

Police say the items were inside a U-Haul full that was stolen near the intersection of Eighth Street and Santa Clara Avenue.

The group Cycles of Change was teaching bicycle safety to students at Maya Lin Elementary.

"We arrived on our final day of programming. We were about to, what we thought, open up the U-Haul and start unloading the bikes and prep for teaching and the U-Haul wasn't there," says Loke Davis, spokesperson for the organization.

The instructors contacted police to see if there was a mistake or if the vehicle had been towed, but they found out that wasn't the case.

The instructors had no other choice than to cancel classes.

"We only had one more class. A fourth-grade class that needed to go through the training. Cycles had already trained all the other students in the school," says Alameda Unified School District Spokeswoman Susan Davis.

Cycles of Change said people have reached out through social media hoping to track down the thieves. But as of yet, no one has been arrested.

In the meantime, Cycles of Change is trying to come up with the $10,000 needed to replace the 50 bikes and 150 helmets that were stolen. The nonprofit says it will also accept donations of gently used bikes, especially those 24 to 26 inches.

"I think we will be able to move forward with our K through third programming because we still have a lot of those bikes. It's primarily our fourth and fifth graders that we won't have bikes for," says Loke Davis.

The group is working with its insurance company to help recover the loss. However, that may take a while and with the bikes being used, they won't be able to recover the full value of the stolen items.