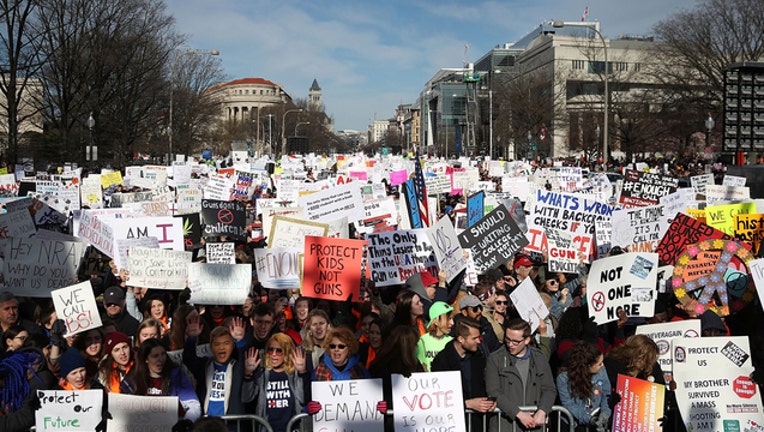 WASHINGTON (AP) -- Student survivors of the Florida school massacre anchored a massive rally against gun violence Saturday in Washington, D.C., while throngs of other young people took to the streets in sister marches across the U.S. The protests followed widespread student walkouts last week.

Here's a look at what some of the demonstrators from Florida's Marjory Stoneman Douglas High School had to say:

WHY ATTEND? "Because we keep chanting, `Never again,' `Enough is enough,' `Never again.' But it's already happened again. It happened in Maryland. There was a shooting in Napa (California's Napa County). So I'm really here to make sure we can make our voices heard; so people are empowered to make sure we vote in legislators so this doesn't happen again; so we can avenge those who were stolen from us because someone thought it was OK to own weapons of mass destruction."

WHAT DO YOU WANT TO SEE CHANGE AS A RESULT? "I definitely want people to vote in new legislators that will help us pass bills that will include banning high-capacity magazines, banning certain semi and automatic assault rifles -- and not just focusing on school safety but focusing in on gun violence as a whole."

WHAT DID YOU EXPERIENCE DURING THE FEB. 14 SHOOTING AT YOUR SCHOOL? "The fire alarm went off, and we all thought it was kind of weird because we had one that morning. But then we heard gunshots. ... And then a cop car pulled up, and they told (students): `Run past Westglades, run past the highway, run past the creek.' And we had to go, like, single file and everything, and it still really hadn't hit me at that point. But then, when we were walking out towards Walmart, we saw an armored SWAT car, and that's when it really hit me that this is something real, this is something (where) people are losing their lives at this very moment.

WHY ATTEND? "I'm here because previous generations couldn't do what we're doing right now. And we want to make this time the last time. So if that means marching all over the world, then I want to be a part of it.

WHAT DO YOU WANT TO SEE CHANGE AS A RESULT? "I want to see safer schools. I don't want to hear that kids don't feel safe at schools. ... I want to see change in gun laws, and I want to see control. We're giving it to people who, it's just not safe. There's no other way to put it, really."

WHAT DID YOU EXPERIENCE DURING THE FEB. 14 SHOOTING AT YOUR SCHOOL? "I was in the freshman building on the third floor. And the fire alarm went off for the second time, and I was making my way to the staircase, and then everyone started screaming and running back. And I almost didn't make it into the classroom, and I'm just -- I'm glad I did. The shots just kept coming and coming. And I thought it was still a drill because they said we were going to have a drill, and then everyone started screaming along with the shots. And I was locked in the classroom on top of a printer for a good hour and a half. (When we were finally able to leave), I saw bodies everywhere, and there were just splatters on the wall. They actually told us to put our heads down and hands on the people's shoulders in front of us, and it was very hard not to look around at the bullet holes in the wall. The only way to get out of the building was to step in blood and over bodies."

WHAT DO YOU WANT TO SEE CHANGE AS A RESULT? "The change I'm looking for is gun reform on banning military-style weapons and more protections for our schools."

WHAT DID YOU EXPERIENCE DURING THE FEB. 14 SHOOTING AT YOUR SCHOOL? "It was a lot of confusion because at first nobody really knew what it was because the fire drill had went off. So most people were going out for the fire drill, and then people heard the code rode, but some people heard it too late. So it was just a lot of confusion. And then after, it was just mostly shock hearing how many people died and how quickly it happened."

WHY ATTEND? "I'm here because I look at the younger kids and I look at the future generations, and I just never want them to have to go through what we went through and to experience what we saw and what we heard ... and just have to deal with being told, `Oh, it's not a problem with guns and this and that.' And I feel there really needs to be a change. And we keep saying, `Oh, this is going to be the last time,' but there's already been another time."

WHAT DO YOU WANT TO SEE CHANGE AS A RESULT? "Better gun laws and legislators voted into office that will actually do something about it and not just tell us, `Oh, what you guys are doing is not going to do anything. It doesn't matter to me. I'm not going for (re-election).' We want people that actually care."

WHAT DID YOU EXPERIENCE DURING THE FEB. 14 SHOOTING AT YOUR SCHOOL? "When I heard the shots, I just remember looking at my teacher and seeing his face and just the kids around me. We all just had, like, blank faces. And I remember getting a phone call from one of my best friends. She was in a closet. ... She didn't think that she would get out of the closet. And I just remember her crying hysterically to me, and at that moment, I was heartbroken. I got a picture of one of my good friends. She was shot in the leg. Just seeing it, I couldn't believe what I was seeing. It didn't feel real."