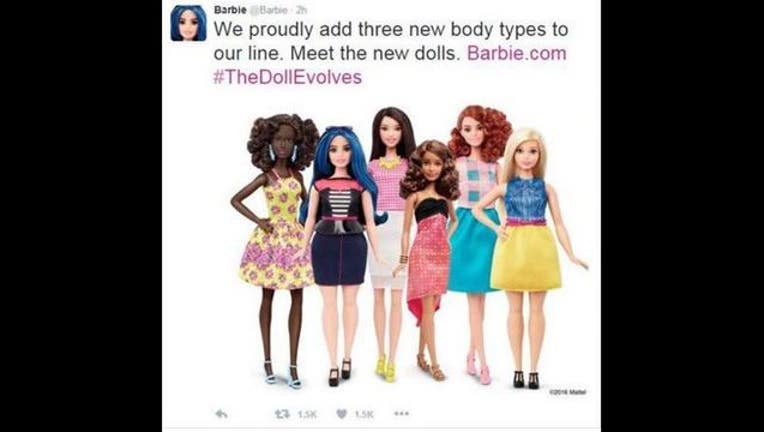 The iconic plastic doll, whose small waist and long legs have been criticized for creating unrealistic expectations for girls, will soon be sold with three new bodies — curvy, tall and petite. Barbie will also be more diverse, coming in seven skin tones, 22 eye colors and 24 hairstyles.

Mattel Inc. has been searching for ways to recharges sales of Barbie, which fell 4 percent in the most recent quarter as 'want lists' from girls increasingly include iPads and other things. The company hopes more kids will be able to relate to the new dolls.

The body transformations have been in the works for two years, said Mattel spokeswoman Michelle Chidoni on Thursday.

The doll has changed in some ways already. New skin tones and looks were added last year. And Barbie's foot was movable for the first time, allowing her to kick off her heels and wear flats.

The El Segundo, California, toy company said it will also continue to sell the original 11.5-inch Barbie. The new versions will begin arriving on U.S. store shelves in March and will roll out globally after that. They are available for preorder at shop.mattel.com, and will ship in February.

Whether the new models will be a hit with children remains to be seen, though Chidoni said previous changes were "positively received."

Marketing experts said more will have to be done to return Barbie to her former glory.

"The look of the dolls is great," said Marc Rosenberg, a marketing consultant in Chicago that has worked in the toy industry for 25 years. But in order to connect with kids, the new dolls need to be show up in Barbie YouTube videos, apps and shows, said Rosenberg.

Worldwide sales for Barbie have fallen every year since 2012 and Mattel will release 2015 sales figures next week. Mattel sells other dolls, including Monster High and American Girl brands. But Barbie remains very important to the company, bringing in about 27 percent of total revenue in the most recent quarter.

It is hoped that the new models will reinvigorate sales by bringing back into the fold the parents who had grown tired of the familiar blonde doll.

"One size doesn't fit all," said Jim Silver, editor-in-chief of TTPM, a toy review site in New York. "This gives people different options when choosing a Barbie for their child."

Barbie may have a new look, but she's still not shying away from media attention. The doll is on the cover of Time magazine, which first reported the changes. Barbie's new curves are shown in shadow on the cover, next to the headline, "Now can we stop talking about my body?"

It's a stark contrast to when Barbie showed up in the pages of the Sports Illustrated Swimsuit Issue nearly two years ago. Back then, the doll wore a black and white swimsuit, black heals and had white sunglasses tucked into her blonde hair.

Follow Joseph Pisani at http://twitter.com/josephpisani . His work can be found at http://bigstory.ap.org/author/joseph-pisani .