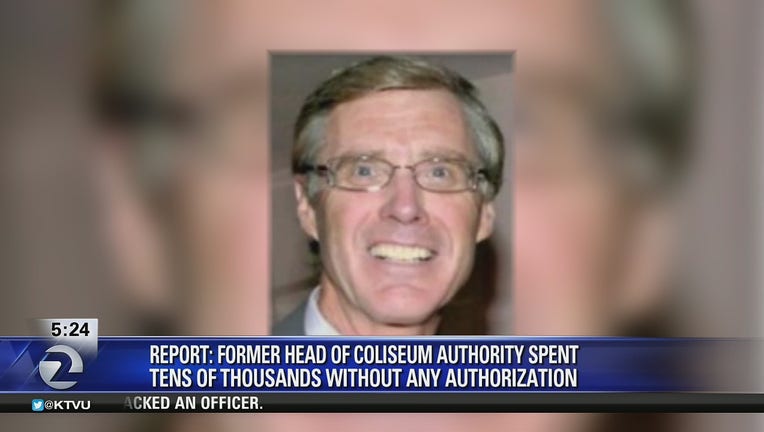 OAKLAND, Calif. - The former head of the agency that oversees the Oakland Coliseum complex was arraigned on Friday on charges alleging that he violated conflict-of-interest laws by seeking a fee while negotiating the naming rights of the stadium.

McKibben, the former executive director of the Oakland Alameda County Coliseum Authority, sought a $50,000 payment for helping negotiate a settlement for the Coliseum naming rights with RingCentral, according to a probable cause statement by District Attorney Inspector Thomas Cleary.

The coliseum authority's board voted unanimously on May 31 to approve and agreement calling the stadium the Ring Central Coliseum in a deal that called for the company to pay $1 million a year for the three years and gave it the option to renew the deal for a fourth year.

But the naming rights deal is now being renegotiated in the wake of the allegations against McKibben, who resigned from his post last Aug. 3.

RingCentral did not pay McKibben the fee after prosecutors notified them of the potential conflict of interest.

At McKibben's brief hearing on Friday Alameda County Superior Court Judge Delia Trevino ordered McKibben, who's out of custody on his own recognizance, to return to court on Feb. 11 to enter a plea and to get booked, fingerprinted and photographed in the meantime.

But McKibben's lawyer Michael Rains said after the hearing that he has already had discussions with the District Attorney's Office about reaching a resolution in the case "sooner rather than later."

Rains said McKibben "is truly sorry to be in this position" but didn't think he was doing anything improper in seeking a fee to negotiate the deal.

Rains, who is well-known for representing police officers accused of wrongdoing, said McKibben offered to negotiate the naming rights deal because the firm that normally represented the Coliseum Authority in naming rights deals didn't want to participate.

Rains said McKibben assumed that the authority knew that he would be seeking a fee for his service if the deal was consummated but said, "That's an assumption that in retrospect he shouldn't have made."

Rains said the deal that McKibben negotiated represented the highest naming rights net payment ever for the Coliseum and his fee would have been paid by RingCentral, not the Coliseum Authority.

He said if the company that normally represented the authority had finalized a similar deal it would have asked for a $250,000 payment from the authority.

Rains said McKibben hasn't previously been in trouble with the law except for a speeding ticket and being charged criminally "has been a shock and an embarrassment to him."