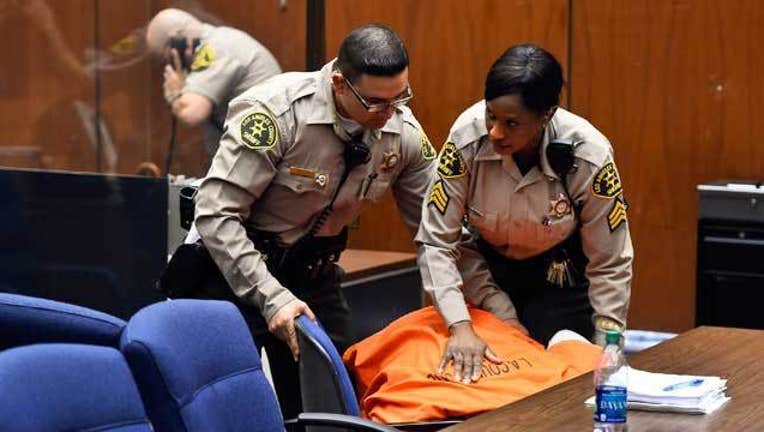 Bailiffs cleared the courtroom and paramedics were seen going inside a few minutes later.

Defense attorney Matthew Fletcher said Knight was unconscious when the lawyer left the courtroom and an update on his condition was not immediately available.

Fletcher said his client, who is diabetic and has a blood clot, previously told him that he hadn't received any medication since Thursday.

Fletcher said Knight hit his head on a chair when he fell after the bail hearing.

Knight collapsed while deputies were bringing him back into the courtroom after Fletcher asked a judge to order that Knight be given his medication.

The attorney said Knight was being kept in solitary confinement without proper access to medication.

The collapse marked the fourth time that Knight has been taken by ambulance from a courthouse since he was charged with killing Terry Carter, 55, in early February.

Los Angeles Superior Court Judge Ronald S. Coen set bail on Friday at $25 million for Knight, who is accused of running down and killing Carter with his truck.

Coen made his decision after Deputy District Attorney Cynthia Barnes noted that Knight was on bail in a robbery case when he struck Carter and another man in a parking lot in Compton.

"He escalated his behavior and committed murder," Barnes told the judge.

Fletcher argued that Knight's bail should be set at $2 million, but Coen said the higher amount was warranted.

The attorney said before the hearing that his client likely could not post bail if it was set at $25 million.

Knight, the 49-year-old co-founder of Death Row Records, has pleaded not guilty to murder, attempted murder and hit-and-run charges.

Barnes filed a motion Thursday accusing Knight of being part of a scheme that has extorted more than $10 million from up-and-coming and established rappers in recent years.

Fletcher countered that prosecutors should file charges involving those extortion claims if they have enough evidence.

Fletcher also said phone records and other evidence in the murder case would show that Knight was lured to the location where the men were hit by the truck. Knight was attacked when he arrived and hit the two men while trying to flee the scene, the lawyer said.

Fletcher said Cle "Bone" Sloan acknowledged to sheriff's investigators that he attacked Knight. The attorney argued his client wasn't required to remain at the scene and endure the attack, and that Sloan should be charged.

"If his name wasn't 'Suge' Knight, they wouldn't have filed this case," Fletcher said.

Knight was a key player in the gangster rap scene that flourished in the 1990s, his label once listing Dr. Dre, Tupac Shakur and Snoop Dogg among its artists. Knight lost control of the company after it was forced into bankruptcy.