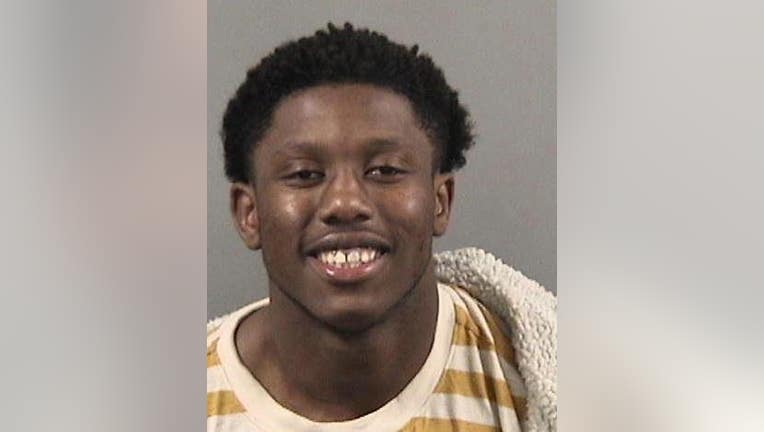 A former linebacker for the University of California was arrested for attacking a police officer early Sunday morning after asking to drive the patrol car. The 19-year-old is undergoing psychiatric evaluation.

BERKELEY, Calif. (KTVU) - A former linebacker for the University of California was arrested for attacking a police officer early Sunday morning after asking to drive the patrol car.

Berkeley Police Department said this incident was a dangerous situation that could have had a tragic ending.

Authorities said around 1 a.m. an officer driving on Gayley Road was flagged down by a man, identified as 19-year-old Joseph Adeyem Wisdom Ogunbanjo of Berkeley, walking near the center median.

When the officer stopped his vehicle, Ogunbanjo walked up the driver's side window.

The officer engaged in conversation with the man who then asked about him about his handgun and if he could drive the police car. According to police, the officer told Ogunbanjo he could not drive the car and directed him to step away from the vehicle. Authorities said that's when the man forcibly opened the driver's side door.

"When he asked to drive the police car, of course the officer told him no, and the officer could also tell he was a bit altered. [He] told him, 'No you should leave and go on home,'" said Berkeley Police Officer Byron White.

The officer thought Ogunbanjo was trying to take his vehicle, so he got out of his patrol car and ordered him to sit on the ground, while he waited for assistance,  the police department said.

After a few moments, the man stood up and walked over to the officer and grabbed him.

Berkeley police said the officer pushed Ogunbanjo away, but the man continued his attack, each time tightening his grasp.

The officer called for backup and tried to handcuff the man when he reached for the officer's holstered handgun.

"After a few moments the man stood up again and ended up attacking the officer, which led to a struggle where he tried to take the officer's gun, not once but twice," White said.

The officer's body camera fell off during the struggle and the man picked up the camera and put it in his pocket.

"The man continued his attack—demanding that the officer give him his handgun," police said in a news release. "At one point during the encounter, the man elbowed the officer in the head—knocking the officer off-balance. That’s when the man got in the driver’s seat of the police vehicle (a police vehicle equipped with a shotgun)."

The officer was eventually able to get Ogunbanjo out of the police car and restrained him with help from other officers.

Ogunbanjo is described as 6'3" and 225 pounds. He was let go from Cal's football team for unknown reasons this fall.

Cal Athletics released a statement that in part said, "While [Ogunbanjo] is no longer a member of our football program, we remain concerned for his well-being."

The linebacker was considered a star at his Texas high schoool.

Berkeley police said they don't know what motivated the attack, but said that the officer involved exercised restraint.

Ogunbanjo was arrested on suspicion of carjacking, threatening violence on a police officer, attempting to remove an officer’s weapon and battery on a police officer. Family members said he is undergoing psychiatric evaluation at a local hospital.