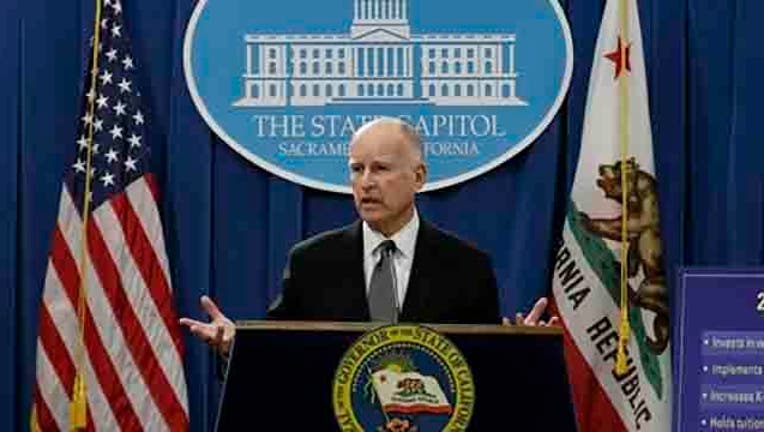 SACRAMENTO, Calif. (AP) — In the 1970s, the environmental movement had no bigger political hero than California Gov. Jerry Brown. He cracked down on polluters, ended tax breaks for oil companies and promoted solar energy.

Forty years later, in his second go-around as governor, conservationists are among his harshest critics.

Climate change is one of Brown's key issues, and he said in his inaugural address last month that his goal is to have California get half its energy from renewable sources within 15 years.

But because he has refused to ban hydraulic fracturing for oil, protesters, or "fracktivists," have dogged Brown for more than a year, even interrupting his speech at the Democratic Party convention last spring.

"Climate leaders don't frack," said Kassie Siegal of the Center for Biological Diversity, a group that praises Brown's programs to boost renewable energy. "The oil and gas boom threatens to undercut all the other progress that our state may make on climate."

Fracking opponents have planned their largest protest so far, a rally Saturday in Brown's hometown of Oakland that they hope will attract thousands. More than 100 environmental and community groups have signed on, and protesters are being bused in from around the state.

These days, Brown rarely engages with his critics. He barely campaigned for re-election last year and holds few public events.

The exception is appearances promoting the use of solar energy or other environmental initiatives. Still, Brown has noted that Californians love their freeways and gas-guzzling vehicles.

"The reason why I have some sympathy for oil drilling in California is because 98 percent of the people are using oil that is imported, and until we get them in electric cars or walking or riding their bikes, we need oil. But we've got to get off it," he said last year.

When protesters interrupted a meeting of the University of California Board of Regents last year, he asked rhetorically whether they cycled or walked to the meeting in Sacramento.

California is the No. 3 oil producer in the nation and has added an average of 300 wells each month for the past decade, about half of them using hydraulic fracturing, which involves forcing fluid, sand and chemicals underground to break rock formations and extract oil and gas. A fifth of the state's oil production comes through fracking.

Through a spokesman, Brown declined to comment on the protest, referring questions to the California Department of Conservation. In a prepared statement, chief deputy director Jason Marshall avoided using the term fracking, instead calling it "well stimulation."

"We have no direct evidence that any harm has been caused by the practice in California," he said. "We believe the regulations we've created, atop existing well construction standards, will protect the environment."

State officials are conducting a series of fracking reviews as California sets up its first comprehensive regulatory framework, after Brown signed a bill imposing new rules.

Oil producers say they will be the toughest regulations in the nation; environmentalists say they were watered down after legislators caved in to oil companies.

Brown is also seeking to ramp up targets set in the 2006 global warming law signed by Republican Gov. Arnold Schwarzenegger. Last year he persuaded lawmakers to devote revenue from fees charged to polluters to help fund the proposed $68 billion bullet train, which Brown touts as an environmentally friendly approach to transportation.

Environmentalists want Brown to follow the lead of New York Gov. Andrew Cuomo, a fellow Democrat who banned fracking last year. But reports by the California Council on Science and Technology contend the kind of fracking done in California is less risky, with little horizontal drilling to expose large areas underground to potential contamination.

"I don't agree with the notion that Jerry Brown is in the pocket of big oil. Some people think that, I don't," said Ross Bates, who headed a successful campaign last November to ban fracking in San Benito County. "When you try to take a middle road, people on either side have a problem with it."

Still, environmentalists were hoping for a more aggressive approach from Brown when he returned to office in 2010. Brown's ballot measure committee last year accepted more than $600,000 from oil companies and energy interests that also gave nearly $200,000 to his re-election campaign.

"In general we expected more of him because we as a state expect more, period," said Marta Stoepker, a spokeswoman for the Sierra Club in California, one of the groups taking part in Saturday's protest.