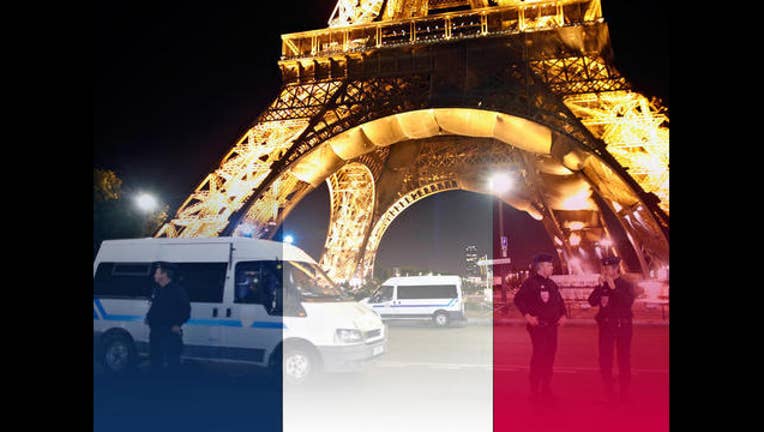 Voter turnout in France's presidential runoff is above 65 percent in late afternoon, a sharp drop of more than 6 percent compared to the last presidential vote.

The Interior Ministry announced Sunday the turnout had reached 65.3 percent, compared to 71.96 percent in the second round of presidential voting in 2012.

A brief election-day security scare at the Louvre Museum in Paris has barely ruffled tourists and locals.

Russian tourist Ksenia Simonova told The Associated Press "there is no more of a security problem in Paris than elsewhere. I come from Moscow and the risk is the same. There are a lot of police officers here. I am not afraid."

Frenchman Eric Kadio came to the park near the Louvre in hopes of seeing presidential candidate Emmanuel Macron, who's expected to speak to supporters from the Louvre courtyard after election results come in later Sunday.

Kadio says "France has an efficient security operation. I am not afraid. Bomb scares are frequent and each time they get things under control."

Police evacuated the Louvre courtyard Sunday because of a suspicious bag but later reopened it.

After the 1848 French Revolution and the proclamation of France's Second Republic, Louis Napoleon Bonaparte - Napoleon's nephew - won the first presidential election at the age of 40. He then staged a coup and ruled as emperor under the name Napoleon III.

Macron has enjoyed a meteoric rise to the top of French politics. The former banker served as the country's economy minister under outgoing President Francois Hollande, but has never held elected office. He launched an independent political movement, called En Marche, only a year ago.

However, Macron would not beat all records for precociousness, if he succeeds Hollande as president. France's King Louis XIV was just 4 years old when he started his rule back in 1643.

The courtyard outside the Louvre museum in Paris has reopened after a brief security scare prompted an evacuation of the site where French presidential candidate Emmanuel Macron plans to celebrate election night.

Explosives experts have left the site after a suspicious bag prompted the evacuation on Sunday of a few hundred people, primarily journalists preparing for Macron event. The museum itself was not evacuated or closed, and visitors continued entering and leaving.

The Louvre already was being heavily guarded after an extremist attacker targeted soldiers near the museum during the presidential campaign. Paris police said the evacuation was a "precautionary measure."

Some 50,000 security forces are guarding voting stations and other sites around France for Sunday's runoff between Macron and far-right leader Marine Le Pen.

Emmanuel Macron's campaign press office says it was a suspicious bag that prompted the evacuation of the courtyard outside the Louvre museum where the centrist French presidential candidate has planned to celebrate election night.

Macron's team said a press room had been set up at the downtown Paris location and 300 journalists who were on site have been evacuated as a precaution.

The Louvre already was being heavily guarded after an extremist attacker targeted soldiers near the museum during the presidential campaign.

The Paris police prefecture Tweeted a reassuring message: "#Louvre These are simple verification measures carried out as precautionary measure."

The runoff election in which Macron is competing against far-right candidate Marine Le Pen is being conducted under the watch of 50,000 security forces guarding against extremist attacks.

Emmanuel Macron's campaign press office says the courtyard outside the Louvre museum where the centrist French presidential candidate has planned to celebrate election night has been evacuated because of a security alert.

Campaign spokeswoman Pauline Calmes told The Associated Press that the Esplanade du Louvre, in downtown Paris, was evacuated on Sunday as a precaution. She did not specify the nature of the threat, but says police ordered the evacuation.

Macron picked the dignified internal courtyard of the renowned palace-turned-museum as the location for his celebration party.

The Louvre already was being heavily guarded after an extremist attacker targeted soldiers near the museum during the presidential campaign.

Lines of French citizens stretched down the block at a school in central London as dozens cast their ballots in the final round of the country's presidential election.

Thousands of French citizens who live and work in the United Kingdom are voting in 11 cities in Britain, making their choice between centrist Emmanuel Macron and far-right populist Marine Le Pen.

London has been described as France's "sixth-biggest city," and French voters in the British capital had two polling stations to choose from. One was the private Lycee Francais Charles de Gaulle school.

Sylvie Bermann, the French ambassador to the U.K., was among the voters casting their ballots on Sunday morning.

France's Interior Ministry says the voter turnout in the country's presidential runoff election so far is running slightly lower than it was in 2012.

The ministry said as of midday Sunday that 28.23 percent of eligible voters had cast ballots, compared with the 30.66 percent half-day tally during the last presidential runoff five years ago.

Centrist candidate Emmanuel Macron was considered the front-runner going into the runoff.

But commentators think a low voter turnout would benefit far-right candidate Marine Le Pen, whose supporters are seen as more committed and therefore more likely to show up to vote.

Le Pen arrived at the polling station with Henin-Beaumont Mayor Steeve Briois, who took over as the National Front's leader during the presidential election campaign.

She was able to vote without any incident after feminist activists were briefly detained a couple of hours earlier Sunday for hanging a big anti-Le Pen banner from a church.

While Le Pen has worked hard to rid her nationalistic party of its xenophobic image, she has campaigned on an anti-immigration, anti-EU platform.

The election is being watched as a bellwether for populism's global appeal.

Centrist candidate Emmanuel Macron, the front-runner in France's presidential election, has voted in the coastal town of Le Tourquet in northern France alongside his wife, Brigitte Macron.

The former Socialist economy minister and one-time banker was all smiles and petted a black dog as he stepped out of his vacation home in the seaside resort.

For security reasons, Macron was driven to his nearby polling station at Le Touquet City Hall and shook hands with a large crowd of supporters before he and his wife entered the building.

Outgoing French president Francois Hollande has cast his vote in the runoff election to replace him.

Hollande voted Sunday morning in his political fiefdom of Tulle in southwestern France.

Hollande, the most unpopular French leader in the country's modern history, decided not to stand for re-election last year.

The Socialist president has called on voters to reject far-right candidate Marine Le Pen and to back centrist Emmanuel Macron, his former protégé.

The Socialist candidate, Benoit Hamon, was eliminated in the election's first round after receiving some 6 percent of the vote.

Macron has opted for the dignified Esplanade du Louvre, the courtyard of the renowned museum in central Paris. The Louvre is already heavily guarded after an extremist attacker targeted soldiers near the museum during the presidential campaign.

If Le Pen wins, she plans to celebrate at the Chalet du Lac (sha-LAY doo lahk) in the Bois de Vincennes (bu-AH de vin-SEN) , a vast park on Paris' eastern edge. She is notably staying away from the area around the Paris Opera, associated with her father's past xenophobic reign over her National Front party.

Celebration sites have a huge symbolic power, and both candidates are trying to break with the past and the traditional left-right divide. It's no wonder Macron didn't choose the Bastille or Republique squares, two highly popular places for the left, or the Place de la Concorde, where former right-wing President Nicolas Sarkozy celebrated his victory.

Feminist activists have hung a big banner from a church to protest French presidential candidate Marine Le Pen in the depressed northern town where she is casting her ballot.

The activists were quickly detained after the protest Sunday in Henin-Beaumont, the latest among many actions in recent days against Le Pen or against both candidates.

Parisian voter Yves Robert staged his own kind of protest, casting a blank ballot. Many voters like him are both worried about the racist past of Le Pen's National Front party and worried about the 39-year-old Macron's inexperience or his pro-business policies.

Retiree Gabrielle Lebbe says she voted because she's "worried for my grandchildren, I'm worried for the world."

With Macron the pollsters' favorite, voting stations opened across mainland France at 8 a.m. (0600 GMT) under the watch of 50,000 security forces guarding against extremist attacks. Polling agency projections and initial official results will be available when the final stations close at 8 p.m. (1800 GMT).

Either candidate would lead France into uncharted territory, since neither comes from the mainstream parties that dominate parliament and have run the country for decades.