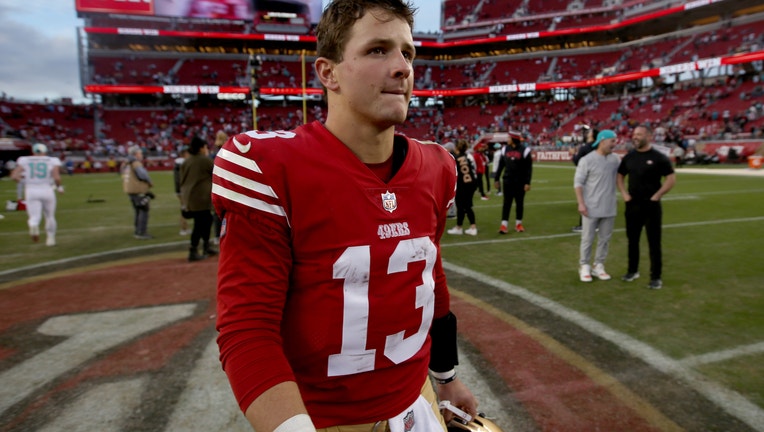 Santa Clara, CA - The improbable journey of Brock Purdy, the man who will be the starting quarterback for the San Francisco 49ers next weekend could be the stuff of history.

49ers Head Coach, Kyle Shanahan, said that Jimmy Garoppolo attended the team meeting on Monday, but needs to see some more foot specialists before deciding on a course of medical care.

For the immediate future, all eyes are on Purdy.

At the NFL draft in April of this year, Purdy was affectionately given the jersey handed out to all of the last picks.

He was drafted in the 262nd position -- dead last -- and given the honorary title of "Mr.  Irrelevant." But Purdy was anything but irrelevant on Sunday as the 22-year-old took over for the injured Garoppolo and led the team to victory over the Miami Dolphins.

After the game Purdy described the experience, and said he had a few butterflies.

When he took his first snap Purdy worked himself into the history books. According to Sports Illustrated he is the first "Mr. Irrelevant" quarterback to ever throw a touchdown pass.

If he does, in fact, start against the Tampa Bay Buccaneers next Sunday he will be the first of the seven "Mr. Irrelevant" quarterbacks ever to start a game.

"That’s just where I fell in the draft. I am very thankful that I got drafted," Purdy said. "I have always had confidence and belief in myself that I could play at this level."

Purdy won the Fiesta Bowl offensive player of the year in 2021 when he led the Iowa State Cyclones to victory and holds 32 individual team records.

He is originally from the Phoenix area and played highs chool football at Perry High School.

At Levi’s Stadium fans and opponents alike are impressed with what they’ve seen.

"Well he got us a win so whatever he is doing he can keep on doing it… as long as we are number one on top," said fan Ernestine Carroll.

Miami Dolphins fan Kelly Arredon was also impressed with what he saw at Sunday’s game.

"For Mr. Irrelevant the last guy in the draft?  I think they have a quarterback controversy to be honest with you. He did pretty darn good against a good defense. He looks interesting to watch so watch out," Arrendon said.

Brock Purdy was born in 1999 just a few months before Tom Brady started his career with the New England Patriots in 2000.

If Purdy starts the game next Sunday he will be going up arguably the greatest quarterback of all time who has been playing at the NFL level for as long as Purdy has been alive.