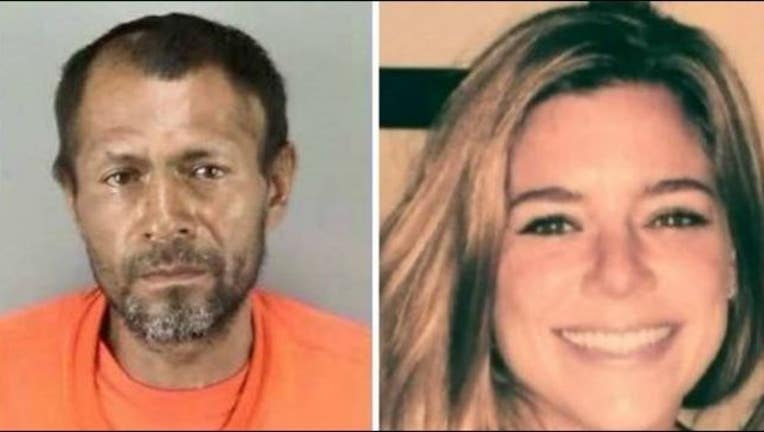 SAN FRANCISCO (BCN) - An undocumented Mexican immigrant who held the gun that killed a San Francisco woman on a city pier four years ago still faces two federal gun charges, even though a California appeals court has overturned his state gun possession conviction.

Jose Ines Garcia-Zarate, 48, held the pistol from which a bullet fired, ricocheted and struck Kate Steinle, 32, in the back as she walked with her father and a family friend on Pier 14 on The Embarcadero in San Francisco on July 1, 2015.

He has claimed that the shooting was an accident and that he found the gun covered in rags beneath his chair, picked it up briefly and threw it into the bay when it fired and he realized it was a gun.

State prosecutors have contended he intentionally pulled the trigger.

He is scheduled to go on trial on those charges in the court of U.S. District Judge Vince Chhabria on Jan. 13, following jury selection beginning on Jan. 7.

But the minutes of a status conference held before Chhabria on Aug. 27 suggest that a plea bargain may be under negotiation. The minutes say, "The parties are working towards a resolution," but say both sides were prepared to set a trial date.

Each of the two federal counts carries a possible maximum sentence of 10 years in prison if Garcia-Zarate is convicted.

In the separate state case, a three-judge panel of the state Court of Appeal on Aug. 30 overturned Garcia-Zarate's sole conviction in a 2017 San Francisco Superior Court trial.

The conviction was for a state charge of being an ex-felon in possession of a gun. The jury acquitted him of additional charges of murder, manslaughter and assault with a gun.

The appeals court said the trial judge failed to instruct jurors that the doctrine of momentary possession -- or holding an illegal item for just a moment before disposing of it -- could be a defense against the gun possession charge.

Justice Sandra Margulies wrote for the court, "We conclude it is reasonably probable at least one juror may have reached a different conclusion if the jury had been instructed on the momentary possession
charge."

Garcia-Zarate was sentenced for the gun conviction in January 2018 to the two-and-half years already served while awaiting trial, and was then taken into federal custody to face the U.S. charges.

U.S. Attorney Dave Anderson said in a statement this week, "The state (appeals) court ruling has no legal effect on the federal prosecution, which will continue. A repeatedly deported, previously convicted felon has no right to possess a firearm under federal law, even if California extends him sanctuary."

Other allegations are that Garcia-Zarate was previously deported five times following convictions for illegal reentry and drug crimes.

He was released from San Francisco jail in April 2015 after a marijuana-selling charge was dropped. Federal authorities were not notified because of San Francisco's sanctuary city policy limiting communication between local law enforcement and federal immigration officials.

The gun with which Steinle was killed was stolen four days earlier from the sport utility vehicle of an off-duty U.S. Bureau of Land Management ranger.

San Francisco District Attorney George Gascon could retry Garcia-Zarate on the state gun charge. Spokespersons for his office were not available for comment Tuesday.