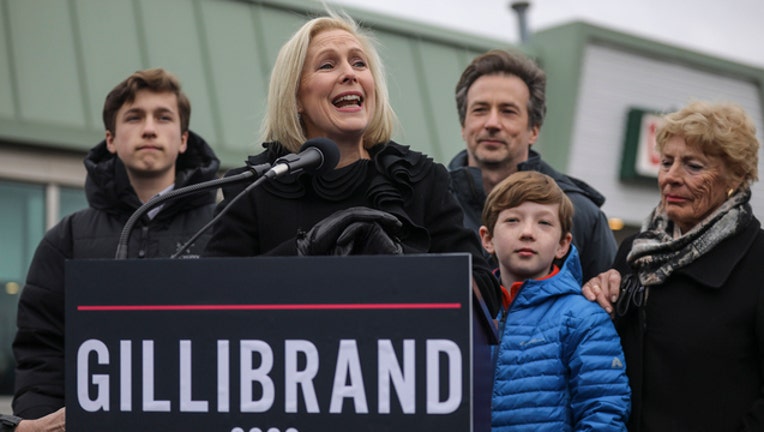 Surrounded by her family, Sen. Kirsten Gillibrand (D-NY) announces that she will run for president in 2020 outside the Country View Diner, January 16, 2019 in Troy, New York. (Photo by Drew Angerer/Getty Images)

WASHINGTON (AP) - - New York Sen. Kirsten Gillibrand formally joined the 2020 White House race on Sunday and previewed the hard line she will take against President Donald Trump by announcing a rally outside one of his signature Manhattan properties.

She had spent more than a month traveling around the country to gauge support for a run.

Her announcement that she was joining the dozen-plus candidates who want to challenge Trump came in a nearly three-minute video produced by her campaign and released early in the morning. She says the national anthem poses this question: "Will brave win?"

In the video, Gillibrand says that the country needs a leader who "makes bold, brave choices" and "someone who isn't afraid of progress. That's why I'm running for president."

She said her debut speech as a candidate will come next Sunday in front of the Trump International Hotel & Tower in New York.

Gillibrand has been one of the most forceful critics of the Trump administration. Using the backdrop of one of Trump's marquee properties is a clear challenge to the president.

She announced her exploratory committee in January in an appearance on "The Late Show with Stephen Colbert." Since then, she has visited a number of states to assess political support for a White House bid.

This coming week she plans to campaign in Michigan, Iowa and Nevada, leading up to her New York kickoff.

Gillibrand has been a vocal advocate for electing more women to office, as well as combating sexual assault and violence in politics and the military.