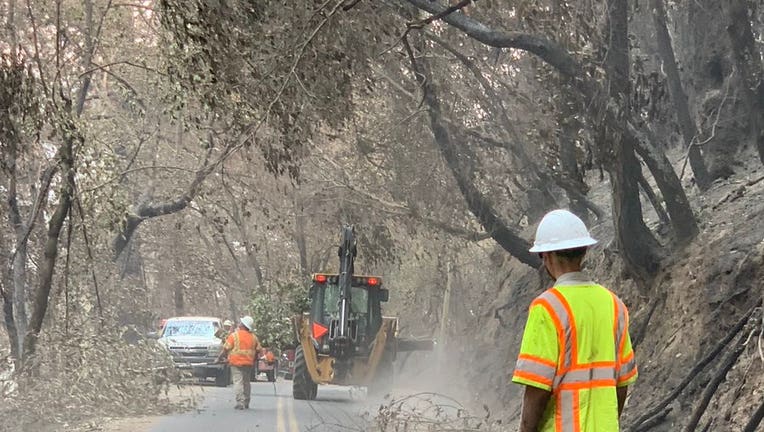 The county hasn't issued any new orders, but all current orders
and warnings remain active, said Sgt. Juan Valencia of the county sheriff's office, and 50 additional deputies have been assigned to patrol evacuated areas to prevent looting.

As the Glass Fire grew to 51,266 acres burned with 2% containment Tuesday evening, Sonoma County officials warned the public not to enter areas under mandatory evacuation orders.

He said deputies had made five arrests as of Tuesday and two more Wednesday of people entering evacuated areas.

Santa Rosa Police Chief Ray Navarro noted during a briefing that
entering an evacuated is not only unlawful, it is unsafe, both for the trespasser and for public safety personnel.

While the city of Santa Rosa has not had any reports of looting or
burglary "We absolutely will not tolerate any crimes by anybody in evacuation zones," Navarro said, adding that answering calls about illegal entry takes resources away from other urgent needs.

As of Tuesday night the Glass Fire had destroyed 143 homes and
damaged 46, along with six commercial buildings destroyed and eight damaged, according to Cal Fire.

The fire "continued to burn actively throughout the day" fueled by
warmer and drier weather, Cal Fire said in a summary, with crews
concentrating on structure defense and creating and reinforcing containment lines.

"Hot and dry weather is anticipated over the next several days,"
the agency said.

In Calistoga, "Significant additional fire resources have arrived
and have been deployed" around the city, including air tanker support.

At the request of Cal Fire, the electrical transmission line from
Middletown to Calistoga was shut off Wednesday by PG&E.

Access to Calistoga is heavily restricted, city officials said,
with city police and outside law enforcement patrolling the city and the California Highway Patrol maintaining roadblocks "to allow unimpeded movement for fire and utility resources."

Calistoga officials said there has been no fire or related damage
in the city limits, but noted there is no timeline yet for repopulation.

Similarly, there is no timeline yet for when evacuees in Sonoma
County will be allowed to return because conditions remain too dangerous and inspections must be made before mandatory evacuation orders are lifted.

"We know people are anxious to get back home," said Susan Gorin, chair of the Sonoma County Board of Supervisors. The fire is still active, infrastructure is being repaired, and burned properties have "a lot of toxics in the ashes," she said.

"This is not a time for sightseeing," she said. "Please be patient
for your safety and the integrity of your site."

Sonoma County residents are advised to visit SoCoEmergency.org and county social media accounts on Facebook and Twitter for the latest information about re-entry and recovery in unincorporated areas.