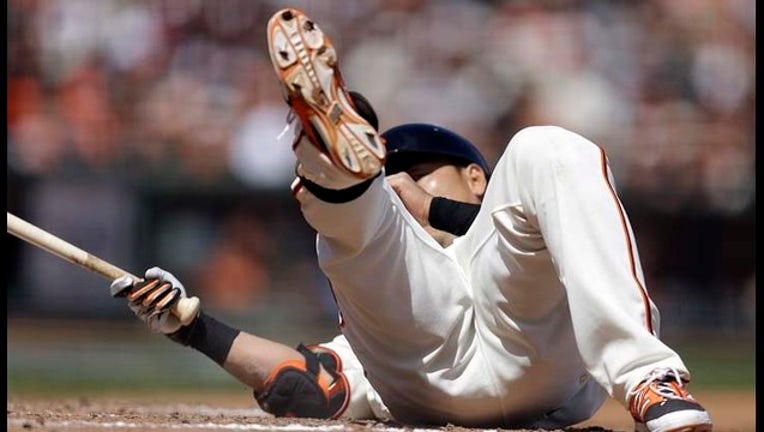 SAN FRANCISCO (AP) -- After a last-place finish a year ago, the Arizona Diamondbacks will take solace in any small positives to start this season. A winning trip and series victory against the defending World Series champions sure counts as one.

San Francisco nemesis Paul Goldschmidt hit a two-run homer to help Jeremy Hellickson get his first win for Arizona, 5-1 over the struggling Giants on Sunday.

''It was a good win, but it only counts for one,'' Goldschmidt said. ''It doesn't really matter in the long scheme of things, but any time you can get a win, it's good.''

Chris Owings added a two-run single and A.J. Pollock had three hits, scored two runs and made a run-saving diving catch for the Diamondbacks, who took three of four in San Francisco.

Arizona won four of seven against San Diego and San Francisco for its first winning trip since sweeping Colorado in a three-game series last June.

Tim Hudson (0-2) allowed five runs in five innings as San Francisco (4-10) lost for the ninth time in 10 games to match the worst start for the franchise since the team moved here in 1958.

''Right now, all we're trying to do is find a way to go out there and play good baseball,'' Hudson said. ''We can pitch better, we can field better and we can hit better. You do those things better, you're going to be better.''

One day after snapping an eight-game losing streak, the Giants found themselves in an early hole against the Diamondbacks thanks to a player who has done plenty of damage against San Francisco in recent years.

Goldschmidt hit the first pitch he saw from Hudson over the left-field fence for a two-run shot. Since his debut on Aug. 1, 2011, Goldschmidt leads all players with 12 homers, 45 RBIs and 32 extra-base hits against the Giants.

''I've been able to have some success,'' he said. ''You never know when that's going to change. It could be a terrible series next time. I just try to get a good pitch to hit, hit it hard and keep it simple.''

Hudson, who has gotten only one run of support in three starts, lost his control in the third and the Giants never recovered. Hudson walked two batters and hit Jordan Pacheco with the bases loaded to force in a run. Owings broke the game open with his hit on an 0-2 pitch that made it 5-1.

''There's such a fine line in this game,'' manager Bruce Bochy said. ''They end up putting up a big number and it changes the game. They outplayed us.''

That was more than enough for Hellickson (1-2), who allowed one runs and eight hits in 6 2-3 innings.

San Francisco got on the board in the first when Nori Aoki doubled and scored on Angel Pagan's sacrifice fly. But three double plays and Pollock's diving catch in center to rob Hudson and end the second inning with two runners on base helped Hellickson avoid any more damage.

''I wouldn't be standing here in this good of a mood if they didn't do what they did,'' Hellickson said of his defense. ''A.J., that might have won the game right there. Then the double plays that they made. They were awesome.''