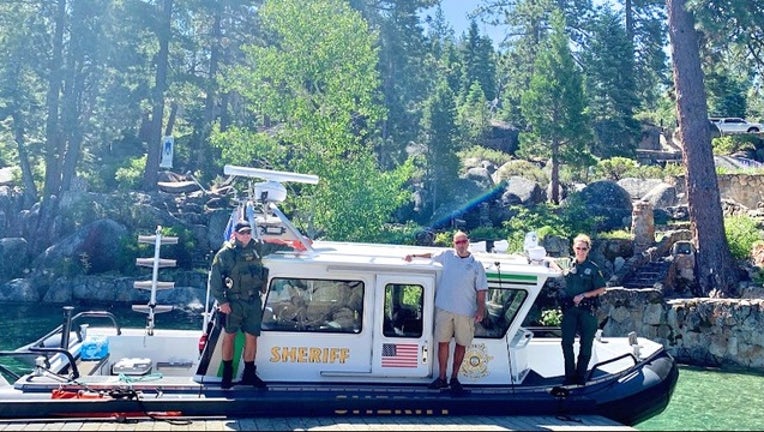 Washoe County Sheriff's Office shared this photo of the Marine 9 crew which took part in the rescue of a near drowning victim at Lake Tahoe on Friday, July 5, 2019.

INCLINE VILLAGE, Nev. (KTVU) - Sheriff's officials are applauding the quick action and heroic spirit of a group of complete strangers who came to the aid of a Bay Area man who nearly drowned in Lake Tahoe earlier this month.

The Washoe County Sheriff's Office said on July 5, the victim had been swimming on Tahoe's east shore, off Thunderbird Beach, when he began to struggle. Witnesses reported that the victim then disappeared under the water.

The events that followed served as a moving reminder that there are good people out there, said Bob Harmon, the public information officer for the sheriff's department. And for the victim, officials said it was a fortunate stroke of serendipity that the first to respond were the right people "with the right skills, in the right place, at the right time."

Several people who saw the man struggling, swam out to bring him to shore.

Once onshore an off-duty firefighter who was in the area, immediately began life-saving measures on the man.

Erin Dohlman of Des Moines, Iowa, also happened to be in the area and rushed over to relieve the firefighter and continue CPR on the victim, Harmon explained.

Deputies later learned that Dohlman had just received her Master of Science degree as a physician's assistant.

Another bystander, Freddy Matias, who also happened to be an off-duty firefighter, arrived and began to assist Dohlman with lifesaving efforts, according sheriff's officials.

When the sheriff's department's Marine 9 water patrol got on scene moments later, deputies said the victim was still not conscious or breathing, so they used an automated external defibrillator (AED) in addition to continued CPR efforts.

All of these actions ultimately saved the man's life.

"After two rounds of CPR, the victim regained a slight pulse and began to breathe. Even though the victim was still unconscious, his pulse continued to strengthen," Harmon wrote in a press release.

He was eventually flown to a hospital in Reno, where he was treated and according to his family, he's now doing well.

Throughout the whole ordeal, Matias was by the victim's side.

He told the deputies that as a fireman, once you start on a rescue you can never leave the victim.

Dohlman, the physician's assistant, was pretty modest about the whole thing, sheriff's officials explained. She was initially offshore on a boat with friends when she first saw the commotion, and she rushed to get on the beach. "She went straight to work to help," Harmon said.

The sheriff's office also hailed the quick actions of its own, praising the work of the Marine 9 crew, Deputies Randy Hill and Heidi Pickard, along with boat operator Ron Rosa.

"I cannot think of a better example of our deputy's commitment to the safety of those we serve and the importance of our partnership with the public," Sheriff Balaam said. "We should all be proud and appreciative of the manner and spirit with which they all came together to save a family from losing a loved one," he added.

Officials said it was an incredible moment that demonstrated something we all need to be reminded of from time to time: "The good side of human nature."

"A life was on the line," Balaam said, "and people stepped up."