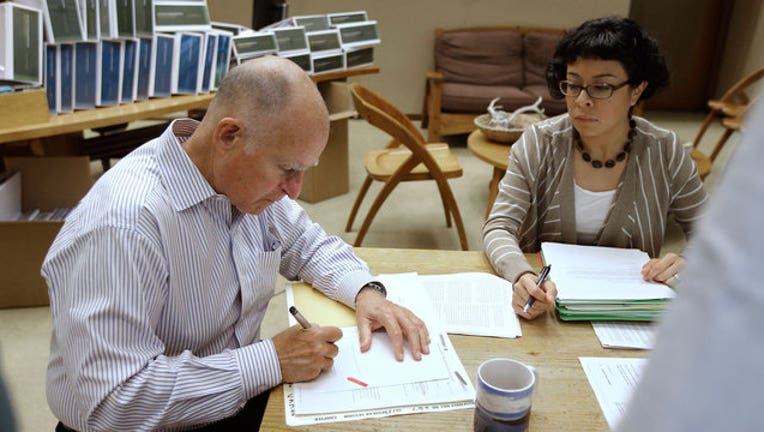 The state Water Resources Control Board will decide May 18 whether to lift a conservation target, most recently for at least 20 percent water cutbacks by urban users statewide. It has been in place since last year.

"We got a reprieve" from El Nino storms that brought snow and rain to Northern California this winter, water board chairwoman Felicia Marcus said.  She says the state needs to use the reprieve to prepare for the years ahead as California moves into a drier future from climate change.

California Gov. Jerry Brown ordered the mandatory statewide conservation last year, at the height of the driest four-year spell in history in California. Nearly 90 percent of California remains in some stage of drought.

Water officials are proposing lifting the mandatory conservation target for cities and towns that can prove they have enough water to get by should the drought persist another three years.

The state's mandated conservation efforts and higher rainfall appear to have eased the state's water crisis, authorities said during a briefing about the situation.

Residents of the drought-stricken state doubled their water conservation efforts in March compared with the month before by turning off their sprinklers when the rain fell and changing habits, officials said last week.

Cities and businesses used 24.3 percent less water compared with the same time in 2013. That's twice the saving from the dry month of February, when the savings hit an all-time low of 12 percent, water regulators announced at a meeting in Sacramento.

"This is the most welcomed news I've had in a long time," said Felicia Marcus, chair of the State Water Resources Control Board. "In the rain, people know to turn off their sprinklers."

March was a cooler and wetter month, and officials also credited Californians with changing their habits, especially when it comes to watering their outdoor landscaping, which consumes half of a home's water use.

Conservation since mandatory cutbacks began in June 2015 has saved enough water to serve 6.5 million people for one year, or 17 percent of the state's population, officials reported.

March is the first month under relaxed conservation requirements. Californians are expected to use at least 20 percent less water, a break from the previous nine months ending in February when Californians were under stricter orders to conserve by 25 percent.

A nearly average amount of rain and snow this winter has eased California's dry spell, filling key reservoirs in Northern California. Officials warned, however, that the state remains in a drought.

This month state regulators in Sacramento are busy writing a new method for conservation in the five-year drought that will be implemented in June. They have said requirements could be reduced in some areas and maintained in others.

The easing drought has prompted many local water districts to say they want to set their own conservation targets. Other water districts say the state should completely drop the drought emergency because key reservoirs in Northern California are nearly full.

New regulations, however, with likely keep in place some level of conservation requirements, officials said.

"Californians have risen to the occasion and acquired habits and skills to conserve," said Jelena Hartman, a state water board senior scientist for climate change. "I believe this is showing the commitment Californians have for conservation."