SAN DIEGO, Calif. - California Gov. Gavin Newsom on Tuesday ordered state Capitol flags to be flown at half-staff to salute the nine service members killed when a Marine amphibious assault vehicle sank in hundreds of feet of water off the Southern California coast on Thursday.

The honoring came the day after the U.S. Marine Corps identified all of the victims, though just one body has been recovered after an intense days-long search. In a statement, Newsom acknowledged the sacrifice service members make for the country.

“Jennifer and I were heartbroken to learn of the loss of nine service members in an accident off San Clemente Island,” the governor said. “It is a painful reminder of the sacrifice of members of our armed forces, who put their lives on the line for us. We stand united in mourning with their families and fellow Marines and Sailors."

The victims were aboard an amphibious assault vehicle that was heading back to a Navy ship Thursday evening following a routine training exercise. The large, tank-like vehicle began taking on water about a half-mile from Navy-owned San Clemente Island, roughly 80 miles off the coast of San Diego.

Crews nearby responded but couldn’t stop the 26-ton vehicle from sinking, according to Lt. Gen. Joseph Osterman, commander of the 1st Marine Expeditionary Force.

“The assumption is that it went completely to the bottom,” he said, adding it was too deep for divers, and Navy and Coast Guard were discussing ways to reach the sunken vehicle to get a view inside of it.

"The Navy has expedited the movement of assets to recover the remains of the Marines and Sailor," I Marine Expeditionary Force wrote in a tweet. 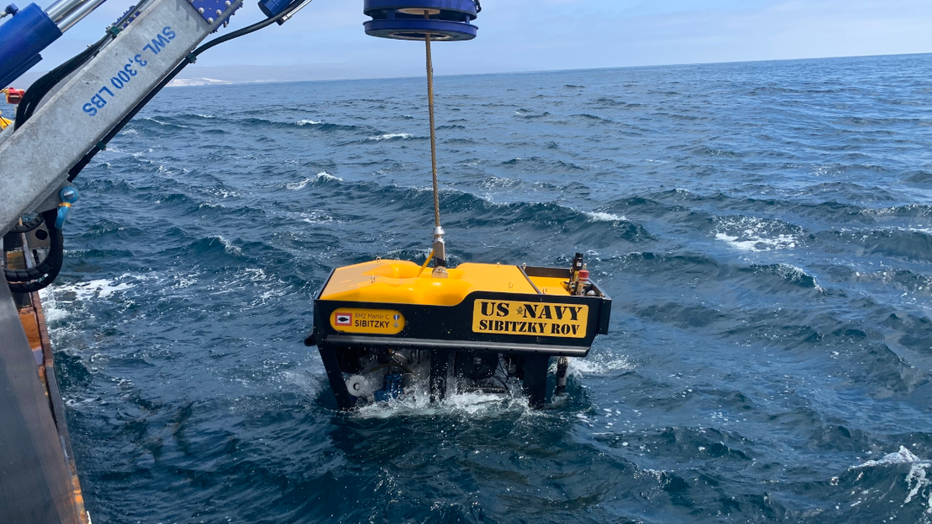 The Navy used remotely-operated video systems aboard a search and rescue ship to search for the sunken sea tank. Photo: USMC/Twitter

The search on Monday led to the body of Lance Cpl. Guillermo S. Perez, 20, of New Braunfels, Texas. The 15th Marine Expeditionary Unit said Sunday that the others are “presumed dead.”

Seven other Marines survived the tragedy were rescued from the water. Two were in stable condition at a hospital, authorities said. The Marine Corps commandant, Gen. David Berger, suspended waterborne operations of more than 800 amphibious assault vehicles across the branch until the cause of the accident is determined.

The Associated Press contributed to this report. This story was reported from Oakland, Calif.