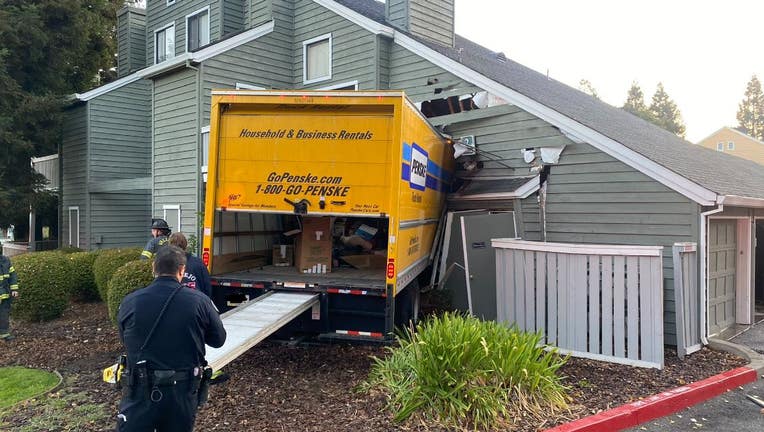 The fire department shared a photo of the incident on social media at 8:35 a.m., but the crash happened about two-and a half hours earlier.

The residential building is located on the 2800 block of Redwood Parkway. In a follow-up post, the department said there were no reported injuries and that utilities had been secured.

A stolen moving truck plowed into an apartment complex early Thursday morning, Vallejo Police Department says. A woman had to rescue her grandson who became trapped.

The grandmother said she was asleep when the rental truck rammed right into their unit at Village View Apartments. She said she thought it was an earthquake or that maybe a bomb had gone off. But then, she heard her grandson screaming.

She said the truck was inside her living room.

"He's screaming for me, I'm screaming for him and then the driver hopped out and actually ran towards me down the hallway," the grandmother said. She did not want to give her name, but she added that the driver of the stolen vehicle then busted through a window and ran off.

The grandmother ran to her upstairs neighbor to help pull debris off to free her 14-year-old grandson. The boy hurt his ankle. His grandmother says he's shaken up.

"He's gonna be traumatized because his life was spared, but he has nothing…nothing. Everything of his was in there. He's a master in karate, a blackbelt. Those are all his trophies, and some, of course, you can't see. He plays for a local high-school football team. But he's gonna be traumatized from this. It's going to take him a minute to realize, you know, what he survived."

The Red Cross was assisting displaced residents. The grandmother's apartment unit has been red-tagged as unsafe to live in.

Officials did not indicate if the driver of the Penske moving truck was arrested. It was not clear if alcohol or drugs was a factor in the collision.

Officials did not say how many people are displaced from this crash.