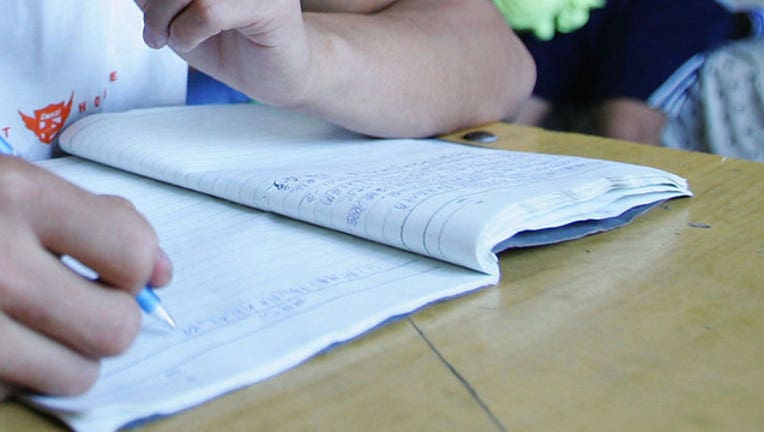 14 year-old Ma Long (L) writes in his diary after a wrestling course, at a dormitory of Sports School of Dongcheng District on July 15, 2005 in Beijing, China. (Photo by Guang Niu/Getty Images)

Police say they received a 911 call from the woman on Tuesday, February 13 after she found her grandson's journal and became alarmed by the contents.

Police say the journal detailed plans to shoot students and use homemade explosive devises at ACES High School in Everett, Wash., which is about 30 miles north of Seattle. When police showed up at the home, officers were also told the grandson had a rifle stored in a guitar case.

Police contacted the high school, and came and arrested the 18-year-old. When officers searched the teen, they say they found marijuana and a knife. Authorities also took the journal, the rifle, military styled inert grenades and other items from the home for evidence.

Just one day later, in South Florida, the deadliest school shooting in the U.S. in five years would take place. An orphaned 19-year-old with a troubled past took his own AR-15 rifle into Marjory Stoneman Douglas High School, killing 17 people and wounding 13 others.

On Thursday morning, Broward County Sheriff Scott Israel called for giving law enforcement more power to detain people who make threats, but also pleaded with the community to be vigilant.

"It's not a phrase; it's not a term -- it's the way we live our lives in 2018. If we see something; say something," he said. "One community member who sees something could do more in a one-minute phone call than sometimes law enforcement can do in a period of months."

That certainly appears to be the case with the grandmother's phone call in Washington.

Meanwhile, the Florida school shooting suspect, Nikolas Cruz, has been charged with 17 counts of premeditated murder.

The teen in Washington, whose name has not been released, has been booked into the Snohomish County Jail on probable cause for attempted murder due to planning and taking substantial steps toward executing a school shooting.