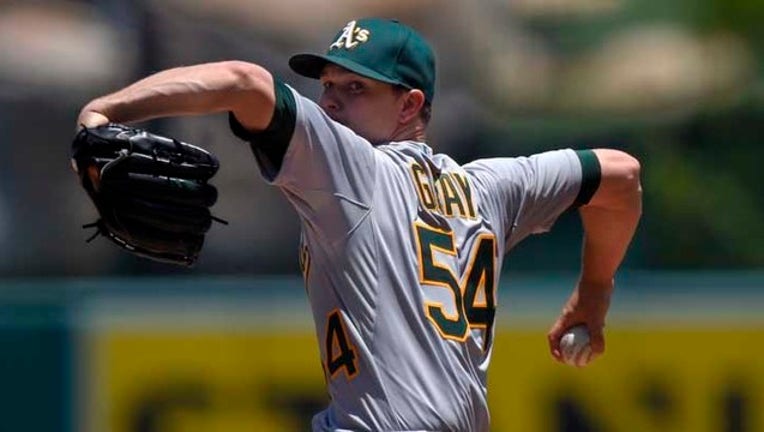 ANAHEIM, Calif. (AP) -- Only twice have the Oakland Athletics had a full-time starting pitcher lead the American League in earned run average at the end of a season. Their names were Catfish Hunter in 1974 and Vida Blue in 1971.

Sonny Gray is making a strong bid to join them on that exclusive list.

Gray lowered his ERA to a majors-best 1.60 on Sunday with 7 2-3 impressive innings in an 8-1 victory over the Los Angeles Angels.

''It's fun every time I go out there,'' Gray said. ''It's still real early, but it's just nice to go out there and get some innings and put the team in a position to win. I'm just throwing the ball well and getting some good defense behind me.''

Gray (8-3) yielded an unearned run and five hits, struck out nine and did not walk a batter. The right-hander has issued only nine walks in his last eight starts after giving up career-high seven on May 3 at Texas.

''My fastball location is better and I'm throwing a lot more strikes,'' Gray said. ''Today I threw my fastball where I wanted to and I hit my spots pretty well with my heater. And when you do that, you're going to win more times than not.''

''I also threw some good curveballs and sliders and tried to keep the ball off their barrel as much as possible with hard movement. It was effective, and that's all I really care about,'' he said.

Gray is 5-1 with a 2.22 ERA in eight career starts against the Angels, including back-to-back wins in April when he retired his final 14 batters in the first one and 18 of his last 19 in the second one.

''I'm under the impression that he's doing that to everybody,'' Angels catcher Chris Iannetta said. ''He's one of the best in the game, and I don't think he gets enough notoriety for how good he really is.''

''He battled with his fastball command,'' Iannetta said. ''When he had it he was good, and when he didn't have it, he wasn't as dominate. It fluctuated back and forth.''

Eric Sogard drove in three runs and the A's capitalized on three errors. They scored an unearned run in the second after errors by Iannetta and second baseman Johnny Giavotella. Iannetta fumbled a squeeze bunt up the third base line by Sogard, and Ben Zobrist skipped around the catcher's attempted tag after he finally got control of the ball.

''It was nice to catch a little break there early in the game and squeeze one it,'' Zobrist said. ''I thought Shoemaker threw pretty well. He just didn't get the breaks, didn't get the defense he would have liked. Finally, we were able to take advantage of some of those. We're due a few of these.''

Josh Reddick increased the Athletics' margin to 2-0 in the third with a bloop single, and they tacked on three runs in the sixth and seventh innings.

The Angels scored in the fourth after shortstop Marcus Semien made his major league-worst 21st error this season. A wild pitch by Gray and a passed ball by Stephen Vogt set up an RBI single by Albert Pujols, the Angels' first hit.

Pujols's RBI was the 1,637th of his 15-year career, surpassing Ernie Banks for sole possession of 29th place on the all-time list. The three-time NL MVP, who homered in a 1-0 win Saturday night, has 17 RBIs in his last 16 games, along with 10 home runs.