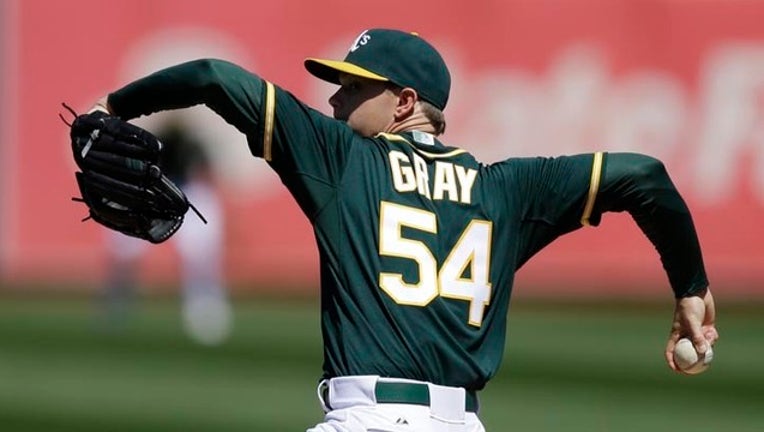 OAKLAND, Calif. (AP) — Sonny Gray's afternoon was long over when the Oakland Athletics' bullpen gave up the go-ahead hit to Seattle in the 11th inning.

Oakland's young ace followed up his impressive opening-day start with another strong outing but didn't get a decision when the Mariners scored three runs off five relievers in a 5-4 win Saturday.

"I thought this game might be a grind," he said. "I could tell warming up in the bullpen. I knew ... if I could keep them there, we'd eventually get back in it. We did that in the seventh but weren't able to finish it."

Brad Miller later threw out a runner at the plate in the 10th and doubled in the go-ahead run in the 11th to send the A's to their third loss in six games.

Cruz, signed to a $57 million, four-year contract as a free agent, hit a three-run drive in the eighth off Dan Otero to put the Mariners in front 4-2, his first home run for Seattle.

Oakland tied the score in the bottom half on RBI doubles by Ben Zobrist off Danny Farquhar and Brett Lawrie against Carson Smith.

Logan Morrison singled against Fernando Abad (0-1) leading off the 11th, advanced on Dustin Ackley's sacrifice and scored when Miller sliced a pitch into the left-field corner for an opposite-field hit.

"I've faced him a couple times, and he's tough," Miller said of Abad.

Tyler Olson (1-0) pitched around two hits and two walks in the 10th, getting help when Ben Zobrist was thrown out at the plate trying to score from first on Ike Davis' one-out double off the center-field fence. Austin Jackson grabbed the ball with his bare hand off a hop and threw to Miller. Zobrist hesitated between first and second bases and was thrown out by Miller, who made a one-hop throw to catcher Mike Zunino for the tag.

With runners on second and third and two outs, Marcus Semien grounded into an inning-ending forceout.

Fernando Rodney pitched a perfect 11th for his second save.

Otero allowed just his second run in 13 appearances against the Mariners, this first in 12 games.

Josh Phegley and Marcus Semien gave Oakland a 2-1 lead with RBI singles in the seventh.

Jesse Hahn (0-1, 4.50) makes his second start for the A's on Sunday. He did not allow an earned run in over seven innings in his only career appearance against the Mariners, last June for San Diego. He gave up five hits, two to Robinson Cano.