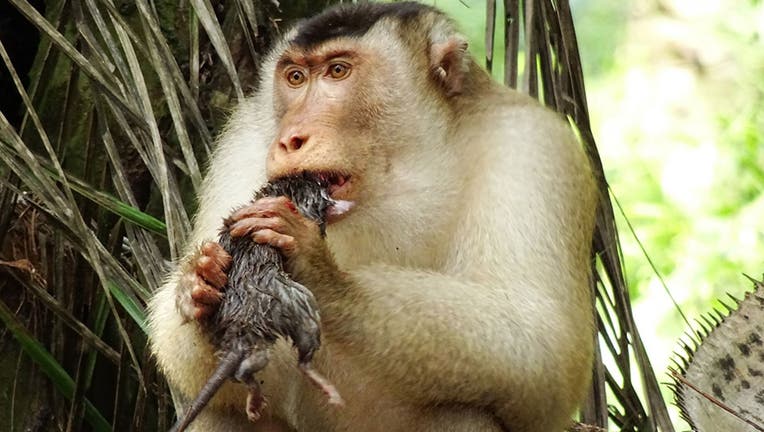 FOX NEWS - Greedy killer monkeys were found to be catching and gobbling up large rats in Malaysia.

Shocked scientists uncovered the rat-catching macaques on palm oil plantations – and say the hungry predators could be used as pest control.

The southern pig-tailed macaques were typically thought to chow down on fruit.

They would also hunt for meaty prey sometimes, but generally only small lizards and birds.

Now scientists have confirmed that these monkeys are also regularly snatching and devouring large rats.

"I was stunned when I first observed that macaques feed on rats in plantations," said Nadine Ruppert, of the Universiti Sains Malaysia, who revealed her research in the Current Biology journal.

"I did not expect them to hunt these relatively large rodents, or that they would even eat so much meat.

"They are widely known to be frugivorous primates who occasionally feast on small birds or lizards."

The report tracked macaques between January 2016 and September 2018 in plantations around the Segari Melintang forest reserve.

Macaque groups typically numbered around 44 monkeys, and killed 3,000 rats per year on average.

That's nearly 70 rats per monkey (or one every five days) over the course of a year.

The macaques would hunt rats while they sheltered inside trees, making the rodents easy prey.

"By uncovering cavities in oil palm trunks where rats seek shelter during the day, one group of pig-tailed macaques can catch more than 3,000 rats per year," said Anna Holzner, of the University of Leipzig.

Rats damage around 10 percent of palm oil crops by eating their fruit, according to estimates.

So scientists now say than rather than being a pest, the macaques can instead be seen as a natural pest-controller.

Experts are urging plantation owners to consider boosting the habitats for macaques.

"We expect that our results will encourage both private and public plantation owners to consider the protection of these primates and their natural forest habitat in and around existing and newly established oil palm plantations," said Anja Widdig, of the University of Leipzig.