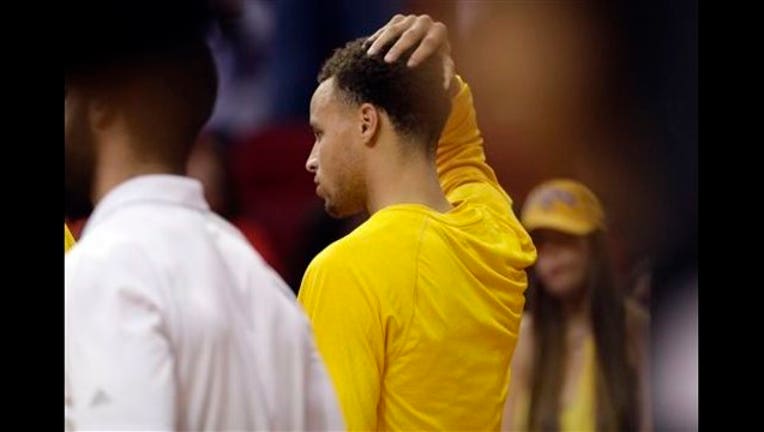 HOUSTON (AP) — James Harden scored a playoff career-high 45 points and the Houston Rockets led from start to finish to avoid elimination in the Western Conference finals with a 128-115 victory over the Golden State Warriors in Game 4 on Monday night.

The Rockets used a playoff record-tying, 45-point first quarter to build a big lead. They were up by 22 in the second quarter when Stephen Curry landed on his head in a nasty spill and missed about 12 minutes before returning.

His first field goal after returning came on a 3-pointer that got Golden State within six points with less than 8 1/2 minutes remaining. But Harden, who had 17 points in the fourth quarter, scored the next seven points as part of 10 straight by Houston to push the lead to 114-98.

Klay Thompson had 24 points and Curry added 23 for Golden State, which moved a win away from its first trip to the NBA Finals since 1975 after routing Houston 115-80 on Saturday night to take a 3-0 lead in the series.

But the Warriors couldn't put the Rockets away and will try again at home in Game 5 on Wednesday night.

Houston bounced back from a 3-1 deficit to the Clippers in the conference semifinals. But they face a much bigger challenge in this series, as no team in NBA history has won a playoff series after trailing 3-0.

Dwight Howard had 14 points and 12 rebounds, and received a flagrant 1 foul early in the third quarter after throwing an elbow at Andrew Bogut's head. He would be suspended by accumulation of flagrant foul points if the NBA upgrades it to a flagrant 2 after review.

The Warriors made 20 3-pointers and Houston had 17 to set an NBA record for most 3-pointers combined in a playoff game.

The Warriors used the Hack-A-Shaq technique on Josh Smith and got two 3-pointers from Curry to go on a 10-2 run to get within 10 with 4 minutes remaining. A dunk by Andre Iguodala got them within eight with about 2 minutes left, but Harden answered with a 3-pointer to shut the door.

Houston led by 23 after one and a basket by Howard to start the second made it 47-22.

Four quick points by Thompson got Golden State within 55-36 when Curry was injured after he jumped in the air as Trevor Ariza was about to go up for a shot. Ariza saw him and stopped abruptly, causing Curry to be upended in midair when he crashed into Ariza's shoulder. His head hit the court and it propelled him up and back onto the floor where he remained for several minutes.

Curry looked dazed as he was attended to before slowly getting up and walking off the court.

He was called for a foul on the play and Ariza made both shots to extend Houston's lead to 57-36 with about six minutes until halftime.

Thompson picked up the slack with Curry out, hitting four 3-pointers in a 23-9 run that get the Warriors within 66-59 with about 30 seconds left in the first half. But Terry hit a 3 as the shot clock expired to put Houston up 69-59 at halftime.

A putback dunk by Terrence Jones at the buzzer gave Houston a 15-point lead entering the fourth quarter. The Warriors opened the final period with an 11-3 run, capped by two 3-pointers by Thompson, to cut it to 102-95.

The Rockets led by nine when Curry re-entered the game midway through the third quarter just after coach Steve Kerr had received a technical foul. Harden got cooking after that with six straight points and nine overall in a 15-2 spurt that pushed the lead to 93-71 with 3 minutes left in the quarter. Harden sank two 3-pointers in that span and revved up the crowd with his stirring the pot gesture.

Curry shot an airball on his first shot after returning and his second try was blocked by Jones.

The Rockets jumped out to a 12-0 lead thanks to eight points by Josh Smith and five straight missed shots by the Warriors to start the game. Smith's hot shooting continued throughout the quarter and he made all five shots, including three 3-pointers, he attempted in the period.

But he wasn't the only one on fire, the Rockets made 17 of 22 shots overall in the quarter and were an astounding 8 of 9 from 3-point range to lead 45-22 entering the second. Houston's 45 points tied a franchise record for points in a quarter in the playoffs that had stood since 1980.