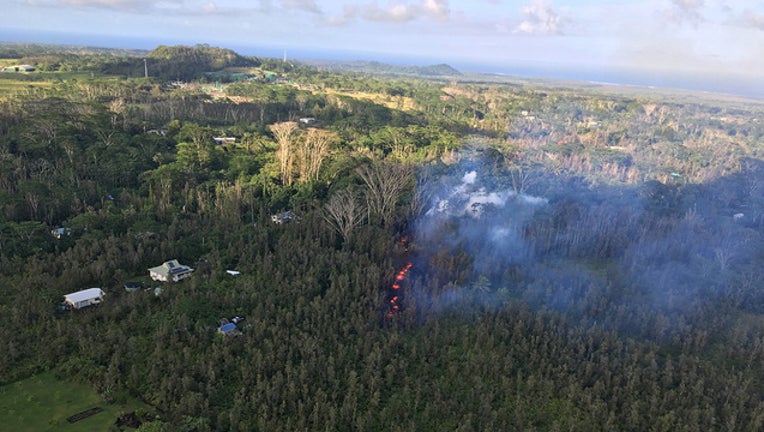 Cancellations from May through July have hit at least $5 million, said Ross Birch, executive director of the island's tourism board.

The booking pace for hotels and other activities, such as tours for lava viewing, zip lines and glass bottom boats have fallen 50 percent. A handful of cruise ships have also decided not to come into port even in Kona on the west side of the island, about 80 miles (129 kilometers) away from the volcano.

This is the "first leak we're seeing out of the bucket," Birch said.

Tourism is one of Hawaii's biggest industries and a big part of the local economy. The industry grew the fastest on the Big Island last year compared to other islands in the archipelago, pulling in about $2.5 billion in visitor spending.

Most of the Hawaii Volcanoes National Park remains closed to visitors due to ongoing seismic activity and the possibility of an explosion at the summit.

On Monday, another fissure spewing lava and unhealthy gas opened up, and a crack in the Earth that emerged a day earlier was sending molten rock on a slow run for the ocean, officials said.

Civil defense officials warned vents in the southeast section of the Lanipuna Gardens neighborhood were releasing levels of sulfur dioxide that pose an immediate danger to anyone nearby. The gas may cause choking and make people unable to breathe, the county said as it warned people in the area to leave.

The National Weather Service has warned residents of "light ashfall" throughout the day in Kau, the island's southernmost district, after a burst of volcanic emissions around 9 a.m.

Nearly 20 fissures have opened since the Kilauea volcano started erupting 12 days ago, and officials warn it may soon blow its top with a massive steam eruption that would shoot boulders and ash miles into the sky.

A fissure that opened Sunday led authorities to order 10 people to flee their homes, Hawaii County Managing Director Wil Okabe said. Overall, nearly 2,000 people have been told to evacuate since May 3, and lava has destroyed more than two dozen homes.

The U.S. Geological Survey's Hawaiian Volcano Observatory said the flow from the crack that emerged Sunday was heading on a path that would take it to the ocean, about 2 miles (3 kilometers) away. No homes or roads were threatened by the flow.

Lava on Sunday spread across hundreds of yards of private land and loud explosions rocked the neighborhood not far from the Leilani Estates subdivision, where more than a dozen other active vents opened over the past week.

Nearby resident Richard Schott, 34, watched from a police checkpoint as the eruption churned just over a ridgeline and behind some trees.

"I've actually seen rocks fly over the tree line, and I can feel it in my body," Schott said. "It's like a nuclear reaction or something."

"The appearance of the fissures in the past couple of days does not change the overall picture or concern," Geological Survey scientist Steve Brantley said.

Christian and Maritza Ricks, who moved to the area from California in April, stopped at the side of the road to watch and listen to the latest eruption.

"I guess it's just part of living on the island," Ricks said.

He said he wasn't really afraid of the destruction happening around him.

"In a way, it's kind of exciting to see what's going on and be this close to it," Christian Ricks said.

The Hawaiian Volcano Observatory reported a fissure opened Saturday just east of the Puna Geothermal Venture energy conversion plant, where steam and hot liquid are brought up through underground wells and the steam feeds a turbine generator to produce electricity.

As a precaution, plant workers last week removed 50,000 gallons (189,265 liters) of a flammable liquid stored at the site.