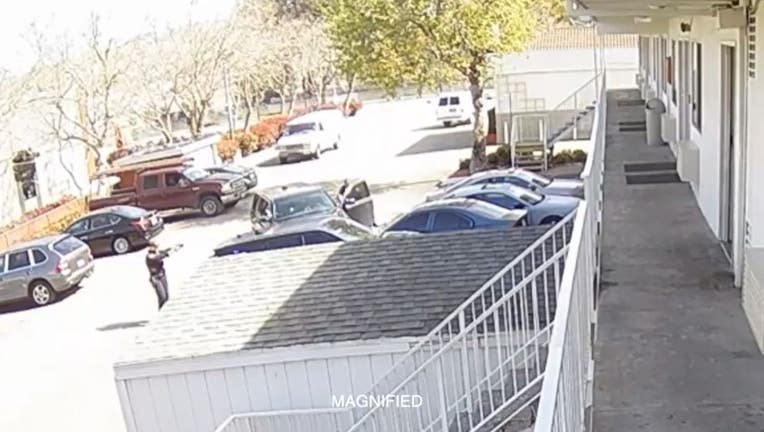 HAYWARD, Calif. - Hayward police on Friday released police-worn body camera footage and other videos of the fatal shooting of Caleb Smith at a Motel 6 parking lot back in March.

Smith, 22, of Oakland was a robbery suspect who rammed police vehicles with a Volvo when they arrived at the hotel parking lot on Industrial Parkway near Whipple Avenue on March 16.

Hayward Police Chief Toney Chaplin said police at the time were investigating a string of robberies that targeted elderly women returning to their vehicles from banks and ATMs.

Chaplin shared a March 11 surveillance video of a suspect blue Volvo involved in a robbery in a parking lot on Hesperian Boulevard. Police noted the passenger side mirror was white and did not match the car. Police said the same blue Volvo was at the same parking lot on March 15. Police had increased their presence in that area. Chaplin said when officers tried to contact the occupants of the vehicle, they fled at a high speed.

On March 16, the day of the shooting, police located the Volvo in the Motel 6 parking lot. Police had said back in March that the driver of the Volvo and passengers were wanted in connection to robberies.

Officer Michael Miller, Officer Christopher Suozzo and Officer Dynaton Tran were the officers involved. Police said they went to detain the three occupants of the car when the driver started ramming police vehicles.

Surveillance video shows the Volvo ramming a police vehicle from its parked position. The police SUV rams the Volvo back into its place, enclosing it with nowhere to escape as it's boxed in by other parked vehicles. Another police SUV is in front of the Volvo and police can be seen with their weapons drawn.

Officers shot Smith inside his vehicle after he rammed the patrol cruiser. Hayward police policy prohibits shooting into vehicles, which is widely being adopted as a best practice in modern policing. Departments have exceptions for extreme situations, such as when someone is intentionally plowing into a crowd of people.

Police said they ordered Smith out of the car, after he was shot, and he complied. Medical aid was rendered and paramedics arrived, but Smith later died from his injuries at a local hospital, police said.

Two passengers in the Volvo were not injured and were detained. An officer also suffered minor injury.

Police said they recovered a firearm from the Volvo. Chief Chaplin did not say if Smith, or anyone else, pointed the firearm at the officers.

Witness cellphone video was also included in the presentation and shows the chaotic scene.

Hayward P.D. in a press release said the video was released to be as "transparent with the community as possible," despite concerns of compromising their ongoing investigation. However, they were legally obligated to release the video under California Law AB 748 last month, which they did not. In addition, the video from the incident appears to be edited when law requires they release the raw footage.

Hayward Police Department's Internal Affairs Unit will investigate whether or not officers acted within policy.

City of Hayward is referring this case to California Attorney General Rob Bonta's office as part of the city's policy. Meanwhile, Alameda County District Attorney Nancy O'Malley will determine if the shooting was legally justified.

KTVU's Henry Lee and Evan Sernoffsky contributed to this story.