LAFAYETTE, Calif. -   A group of teenagers in the East Bay has been working to create a comfortable and fresh new space to promote healing in support of a high school senior battling a rare and aggressive form of cancer. 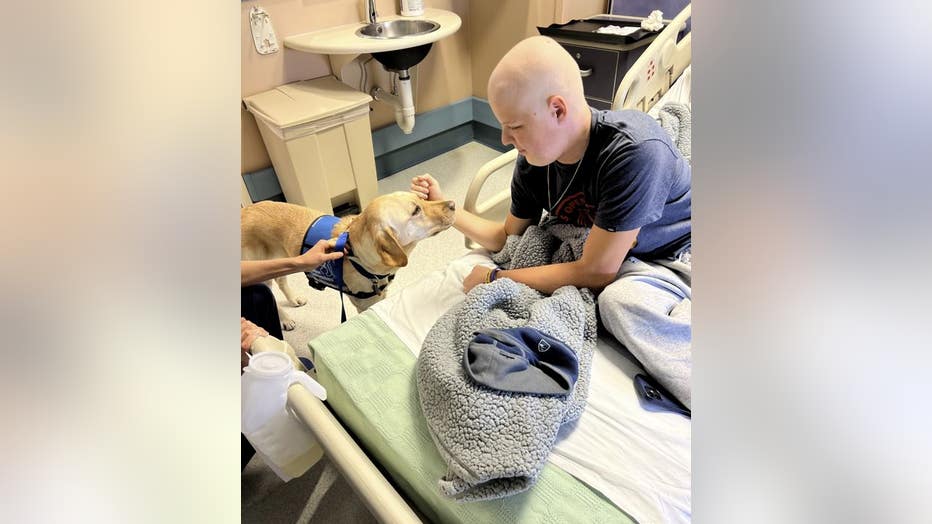 For years, the club has worked to help those going through hardships by carrying out "extreme makeovers" in their living spaces.

"Think extreme makeover the HGTV show but a much smaller scale," organizer Sheila Gerlach said. Previous projects by the club have included remodels for children in hospice, battered women's shelters, a halfway house, and a nursery for children of families in crisis.

This year, the club has chosen to put its efforts toward someone the student volunteers can easily relate to: a fellow high schooler, a caring and hardworking teen who himself has been an active member in his own community: Dylan Mandell, a Campolindo High School senior in Moraga.

The teen was diagnosed with a rare type of cancer known as rhabdomyosarcoma last summer.

It first began as concerns over headaches, and then those worries evolved into the family thinking the 18-year-old might need to get a wisdom tooth removed. Further evaluation came right before the start of his senior year, when doctors found the teen had a large hole in his jaw bone with a tumor sitting on top of it.

"That was August 9th, the day before his senior year began, and it was like everything kind of stood still for a minute," said Dylan’s mother Kaytie Mandell.

A biopsy and extensive genetic testing would further reveal the teen had cancer and would need major surgery, physical therapy, and months of aggressive treatment that included chemotherapy and radiation.

In September, the Lafayette teen underwent a 15-hour procedure at the University of California, San Francisco, where doctors removed his jaw bone as well as the tumor. The procedure also involved taking one of his tibia bones in the legs and reshaping and recreating it to form a new jaw bone.

Following a three-week recovery from surgery, Dylan went right into weekly chemotherapy sessions, as well as daily radiation therapy during the month of December.

When he hasn’t been in the hospital, much of his time has been spent at home, often in his bedroom in bed. Because he hasn’t been able to attend school, his bedroom has also been where he’s conducted much of studies as part of his hospital schooling program.

The journey has been a long and arduous one, understandably, with some days being more difficult and challenging than others, especially as the teen has had to go through a debilitating and isolating illness, with already so much lost during a pandemic.

"The end of the year, at the end of December when he was sick of chemo, it was really hard," his mother shared. "The days were very dark and very painful. And he’s just like, ‘You know I spent years being home [because of] Covid and now my senior year, when everyone gets to go back, I don't get to go to school.’"

Mandell also noted that Dylan has a twin brother. "It’s hard watching your brother go to school every day and doing everything you want to do."

There has been a long list of activities that Dylan loved to do but has had to give up.

He’s been a varsity athlete, as an avid lacrosse and football player. He’s also an accomplished Eagle Scout in his Boy Scout troop, and he’s an active member of the youth group at his church. He’s also had to give up his job as a lifeguard and hasn’t been able to continue volunteering at the Monument Crisis Center, a food bank and resource center, where he's helped out, alongside his mother during the pandemic. 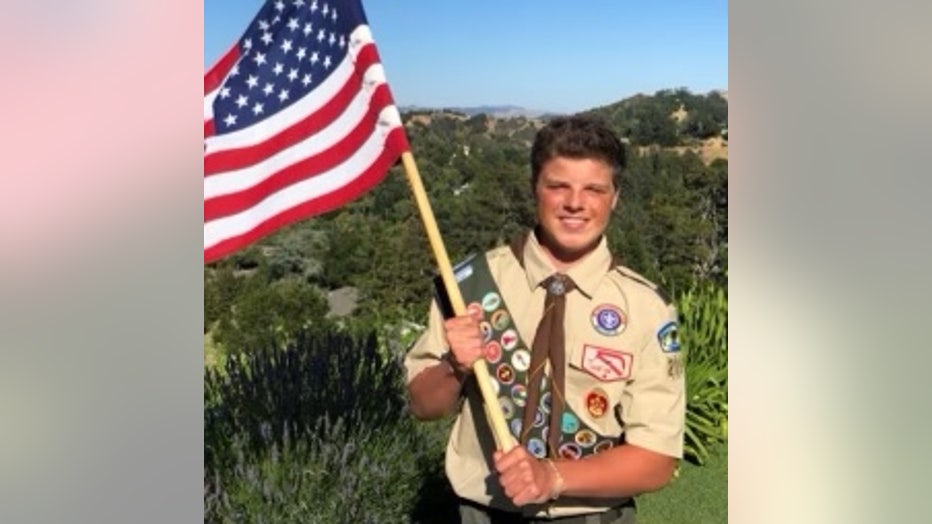 Eagle Scout Dylan Mandell has been battling a rare form of cancer known as rhabdomyosarcoma. High school club "Healing Spaces" has been working on a project to remodel his room as he recovers from treatment and surgery.  (Mandell family )

"He gave up a lot, and that’s been the biggest challenge," the teen's mom said. "It’s just kind of being so active and then, he can't do it anymore."

So when "Healing Spaces" announced its next project would be focused on Dylan, the news was welcomed with great gratitude as it offered a sense of hope and renewal. Mandell said a friend of hers, who had a child go through cancer, nominated Dylan as this year’s recipient of the club's efforts.

Mandell said the family surprised her son on Christmas morning with the news.

"He actually was really sick on Christmas, but it was just like, one more thing to look forward to," the mother shared. "He was just so excited because you do spend a lot of time at home, and a lot of time in your bed not feeling great, and he was so excited to maybe get a comfy chair, something to lounge in that wasn’t a bed, and a space that’s his," she added.

Mandell said Gerlach threw out the idea of creating a man cave-like space for Dylan, to which he enthusiastically endorsed, while his mother joked, "I don't think he even knew what that meant, but he was like, ‘Yes!’"

The timing of the remodel couldn't be better, with Dylan scheduled to have his last chemotherapy session March 28. The following weekend was when the young construction crew planned to come in and do its work.

"... we are marching towards an April 2nd date of having the students come in and clean out the room, repaint, fix the holes in the wall, take out the old furniture and replace with comfy couches, a desk for him to study at, fresh bedding and things like that to bring him comfort," Gerlach told KTVU, adding, the students also planned to install a television in the room.

The group has been raising money for the remodel project and has launched a GoFundMe campaign which has so far collected a little more than half of its $20K goal.

For Gerlach, the efforts put forth by the club was also a way to continue the work her late mother, Sharon Gerlach, began. "Healing Spaces" was a concept begun by Sharon Gerlach, described as a generous, kind, and talented interior designer. She passed away from brain cancer almost a year ago in March.

"In her honor, her daughter, her best friend, and the students are continuing the legacy of Healing Spaces," the GoFundMe shared.

A year after Sharon Gerlach was lost to cancer, her legacy would be one that would help a young cancer fighter and give him hope and something to look forward to.

"Chemotherapy is just such a marathon," Mandell said, adding, "It's a really long time in a kid's life."

The mother said that after every chemo session, the family has been crossing off the week and counting down until Dylan's final treatment. And true to the positive attitude he’s been known for, he’s keeping focused on what’s ahead.

"As these sunny days have come up, just realize that he is blessed," Mandell said. "He’s a very spiritual kid. He knows he’s going to get through this. He’s looking forward to college next year," the mom shared, noting that her son has been eagerly waiting to hear back from the schools he's applied to.

"It’s looking ahead: graduating with his twin brother," Mandell said, adding, "He knows that he’s going to get back to school for the last five weeks of high school, really looking forward to that."

And in the more immediate future, he’s excited about what his new healing space will bring and all it symbolized.

"You get to start over a little bit and in your space, and those were his words," the mother shared, "Just something fresh and new, something else to look forward to." 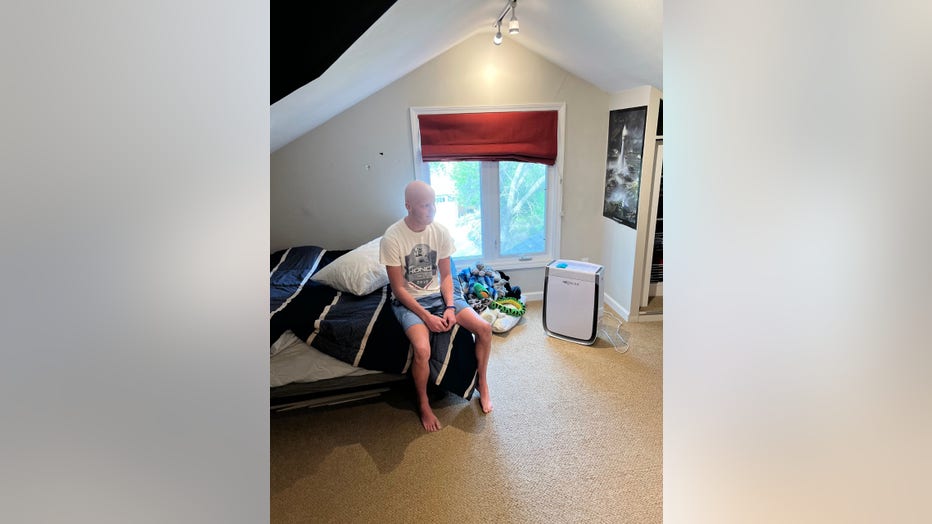 Healing Spaces, a club involving students from De La Salle and Carondelet high schools are planning to give Dylan Mandell's room a major makeover, as he recovers from cancer treatment.  (Mandell family ) 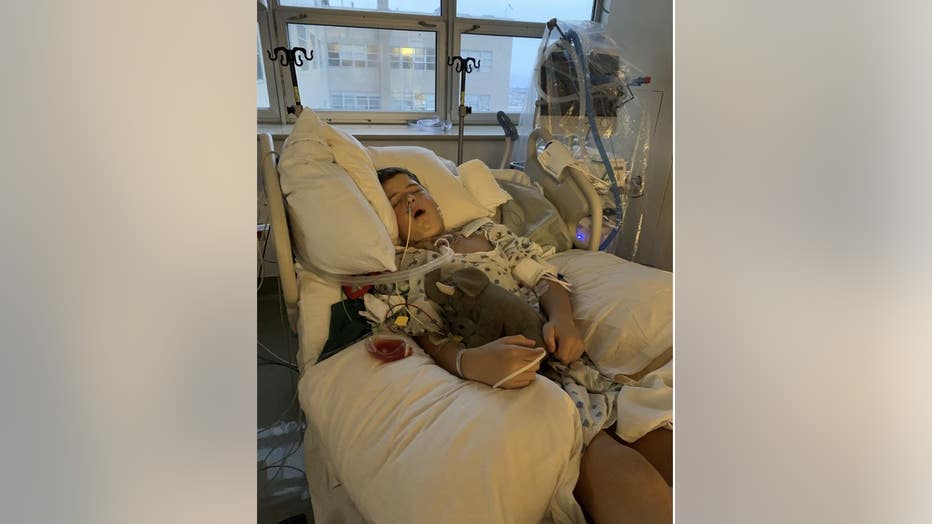 Campolindo High School senior Dylan Mandell of Lafayette in the hospital. The 18-year-old has been battling a rare form of cancer known as rhabdomyosarcoma. Student volunteers have been working on a remodel project for his room.  (Mandell family ) 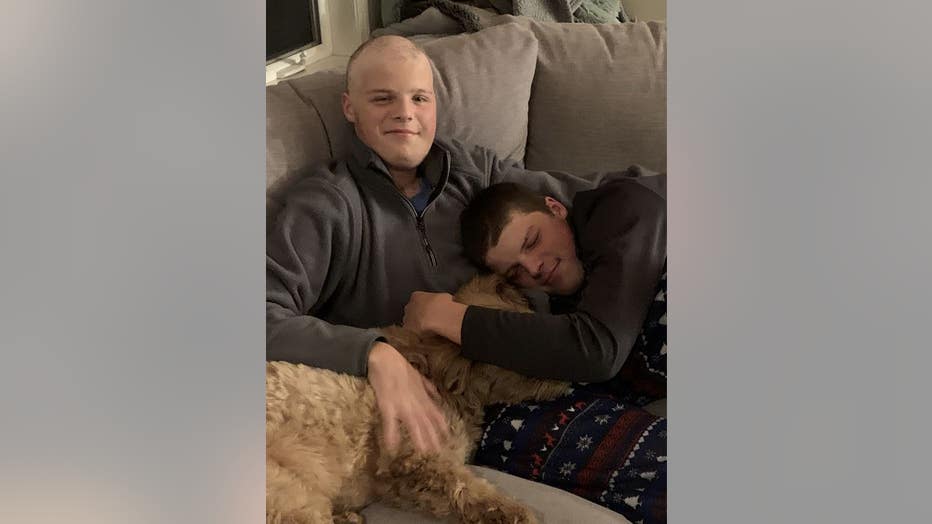 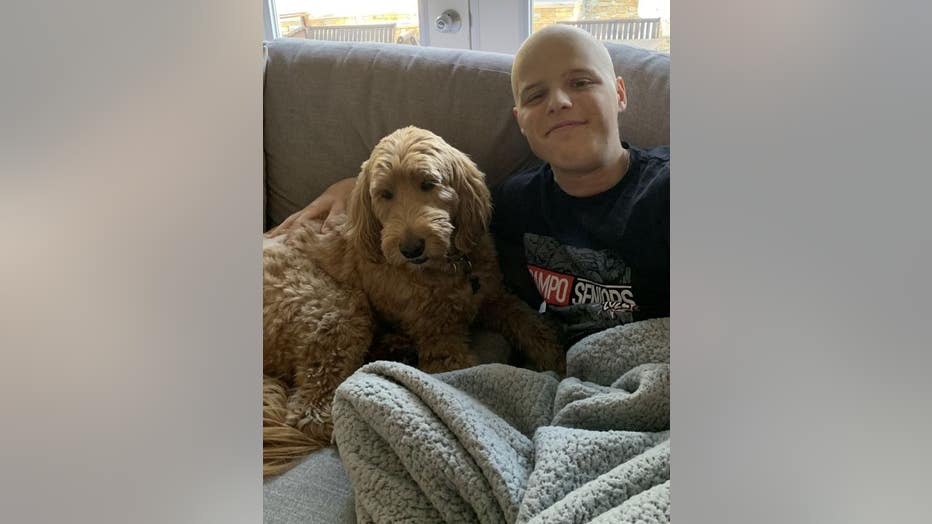 Campolindo High School senior Dylan Mandell at home in Lafayette. The 18-year-old has been battling a rare form of cancer known as rhabdomyosarcoma. He's at the center of efforts by student volunteers with "Healing Spaces," a school club which is pla (Mandell family )