Here’s how the 25th Amendment to the US Constitution works

It was created to clarify the rules for replacing a deceased or incapacitated president, ultimately ratified in 1967.

WASHINGTON - House Speaker Nancy Pelosi said this week that Democrats plan to discuss the 25th Amendment, the constitutional provision that deals with the transfer of presidential power, either temporarily or more permanently.

The announcement comes after President Donald Trump contracted COVID-19, just weeks before the Nov. 3 election. In a press conference Thursday, Pelosi said the president needs to disclose more about his health after his diagnosis — including when he first contracted the virus as others in the White House became infected.

“The public needs to know the health condition of the president,” Pelosi said, later invoking the 25th Amendment, which allows a president's cabinet or Congress to intervene when a president is unable to conduct the duties of the office.

Trump responded swiftly via Twitter, writing: “Crazy Nancy is the one who should be under observation. They don’t call her Crazy for nothing!”

On Friday, Pelosi along with Rep. Jamie Raskin, D-Md., a constitutional law professor, rolled out the legislation that would create a commission for review.

What is the 25th Amendment and how does it work?

The amendment was added to the Constitution following the assassination of President John F. Kennedy in 1963.

President Lyndon B. Johnson in his 1965 State of the Union promised to “propose laws to insure the necessary continuity of leadership should the President become disabled or die.” The amendment was passed by Congress that year and ultimately ratified in 1967. 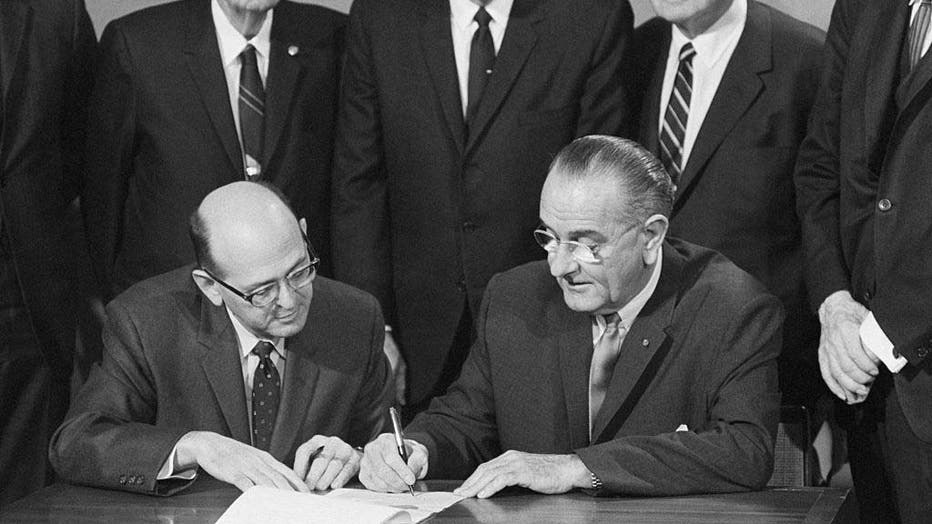 In a ceremony at the White House Jan. 23, 1967, the final step in the ratification procedure of the 25th Amendment that began in July, 1965, was completed. (Photo credit: Getty Images)

To temporarily transfer power to the vice president, a president sends a letter to the Speaker of the House of Representatives and President pro tempore of the Senate that they are “unable to discharge the powers and duties of his office.”

The vice president then becomes acting president. When the president is ready to resume authority, the president sends another letter — which is spelled out in the amendment’s Section 3.

Section 4 of the amendment lays out what happens if the president becomes unable to carry out their duties but doesn’t transfer power. In that case, the vice president and majority of the Cabinet can declare the president unfit. They would then send a letter to the Speaker and President Pro Tempore saying so. The vice president then becomes acting president.

Has it ever been invoked?

Presidents have temporarily relinquished power — but not all invoked the 25th Amendment. Previous transfers of power have generally been brief and happened when the president was undergoing a medical procedure.

When President Ronald Reagan was shot in 1981, his administration prepared — but did not sign — the letters necessary to invoke the 25th Amendment, according to the Reagan Library and Museum.

But Reagan did temporarily transfer power to Vice President George H. W. Bush while undergoing surgery to remove a polyp from his colon in 1985, but he said at the time he wasn’t formally invoking the 25th Amendment.

While he said he was “mindful” of it, he didn’t believe “that the drafters of this Amendment intended its application to situations such as the instant one.” Bush was acting president for eight hours according to a book on the amendment by John D. Feerick.