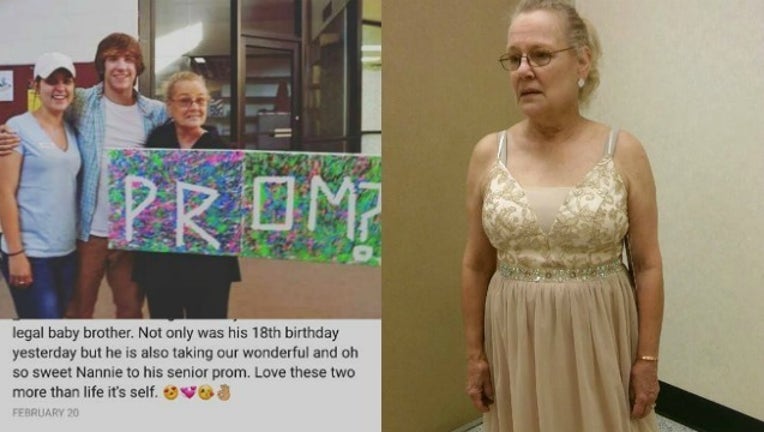 EUFAULA, Ala. - A sweet Alabama teenager wanted to give his grandmother the opportunity she never had to attend a high school prom. But after an adorable “promposal,” and a new dress was bought, his high school principal changed his mind and said the Granny is not welcome.

Bryce’s cousin wrote in the post that the decision to allow the Grandmother to go to prom reached the Board of Education and that they said if Bryce were to take “Nanny” to prom, then future students will do it as a joke and “make the school a mockery.”

Students are using the hashtag #letnannygotoprom to fight the decision.

Eufaula High School sent a statement to WTVM which reads:

‘The Junior-Senior Prom is a cherished event held in the spring of each year. Attendees must be under the age of twenty and/or should be enrolled at EHS. Non-EHS students who are planning to attend as dates must present a valid photo ID verifying their age prior to admittance. Students planning to bring a non-EHS student as a date must also inform the prom sponsor no later than two weeks prior to the event. Students who purchase tickets for dates who have not been previously approved to attend are subject to the forfeiture of the Non-Refundable prom ticket. Inappropriate attire, as deemed by the administration, which violates the decency and modesty clause of the ECS Code of Conduct will not be permitted.

‘Steve Hawkins, principal of Eufaula City Schools, stated, “Safety of students and staff is the first and most important of the many tasks of a school administrator. For the 10 years I have been high school principal, we have denied requests each year from students asking to bring older dates to prom.  We do not chance leaving any stone unturned when it comes to safety. Most high schools have an age limit for prom attendees.’

‘Other safety measures used by Eufaula City Schools include doing background checks on all school volunteers no matter their age and using a screening system called Raptor to check all school visitors for sex offender status.

‘No staff member at Eufaula City Schools has been contacted recently by a parent or guardian questioning the age limit for prom attendees.  For the situation that has come to light on social media by an out-of-town cousin of a current Eufaula High School student, a call was made this morning to the father of the student to request a meeting.  The father is unable to meet until Monday morning.’”