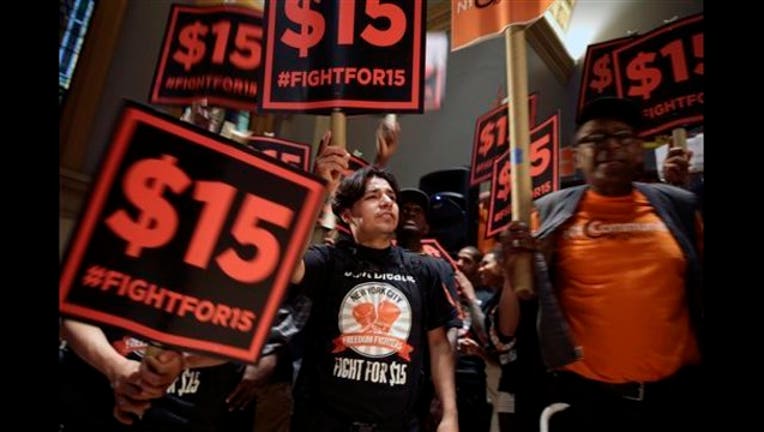 SAN FRANCISCO (AP) — The push for a higher minimum wage gained momentum on both sides of the country Wednesday, with New York embracing an eventual $15 an hour for the state's 200,000 fast-food workers and the huge University of California system announcing the same raise for its employees.

"How we support our workers and their families impacts Californians who might never set foot on one of our campuses," said UC President Janet Napolitano, who oversees 10 campuses, including UCLA and Berkeley. "It's the right thing to do."

The University of California becomes the nation's largest public university to embrace the $15-an-hour wage that has become the rallying cry of many labor groups in recent months.

So far, Los Angeles, Seattle, San Francisco, Oakland and Berkeley have approved phased-in increases that eventually will take their minimum wage to $15 an hour, or about $31,200 a year. On Tuesday, Los Angeles County, the nation's most populous county, voted to craft a law to do the same over five years.

In New York, the state Wage Board endorsed a proposal to set a $15 minimum wage for workers at fast-food restaurants with 30 or more locations. The increase would be phased in over three years in New York City and over six years elsewhere.

Gov. Andrew Cuomo's administration has the final say, and Cuomo has signaled his support. New York would become the first state to take such a step for a specific industry. The state minimum wage is now $8.75 and is set to rise to $9 at year's end.

"You cannot live and support a family on $18,000 a year in the state of New York — period," Cuomo said at a New York City rally celebrating the proposal. "This is just the beginning. We will not stop until we reach true economic justice."

Restaurant owners warned that higher wages will force them to raise prices, cut employee hours and maybe hire fewer workers, and they said they may challenge the move in court.

"Singling out fast-food restaurants while ignoring other industries that hire workers who are paid under $15 is unfair and discriminatory," said Jack Bert, who owns seven McDonald's in New York City.

At the University of California, UC's hourly wage earners — a group that includes students and full-time employees working in dining halls, dorms and bookstores or as gardeners, housekeepers and custodians at campuses and hospitals — currently make the state minimum of $9 an hour.

Napolitano said she will boost that to $13 in October for employees who work at least 20 hours a week and will raise it some more in stages to $15 by the fall of 2017.

UC has nearly 240,000 students and is California's third-largest employer, with a staff of 195,000. About 3,200 UC employees and a much larger but undetermined number of people employed by outside contractors will receive the higher wage, UC said.

"I just thought it was important for a public university to plant the flag here for low-wage workers and a more livable wage," said Napolitano, who was President Barack Obama's homeland security secretary before she assumed leadership of the university nearly two years ago.

Napolitano's plan does not need approval from the university's governing Board of Regents.

The higher minimum-wage argument has gained traction amid concerns over the shrinking middle class and rising income inequality.

Democrats, including presidential front-runner Hillary Rodham Clinton, have said they support a higher federal minimum wage, which is currently $7.25 per hour.

Vice President Joe Biden was scheduled to promote a higher minimum wage during a stop Wednesday at a washroom equipment manufacturer in Los Angeles.

Wal-Mart, the nation's largest private employer, announced early this year that it is raising wages for a half-million employees to at least $10 an hour by next February.

Other public university systems around the country, including those in Washington state, Indiana and Tennessee, have adopted minimum wages higher than those set under state or federal law. But none have committed themselves to going as high as California.

University of California officials estimated that the raises for workers directly employed by UC will cost $14 million a year, a fraction of the system's $12.6 billion annual payroll. UC said it also expects contractors will pass some of the cost of higher wages onto the university.

The Republican leader of the California Assembly criticized the university's plan to extend the higher wage to outside contractors.

"The university should be teaching engineering, not spending student dollars to practice social engineering by limiting who campuses can do businesses with," Assemblywoman Kristen Olsen said.

In Washington, D.C., meanwhile, elections officials approved the language of a proposed ballot measure that would make the nation's capital the first East Coast city to adopt a $15 minimum wage. Supporters will have to gather about 23,000 signatures to get the proposal on next year's ballot.