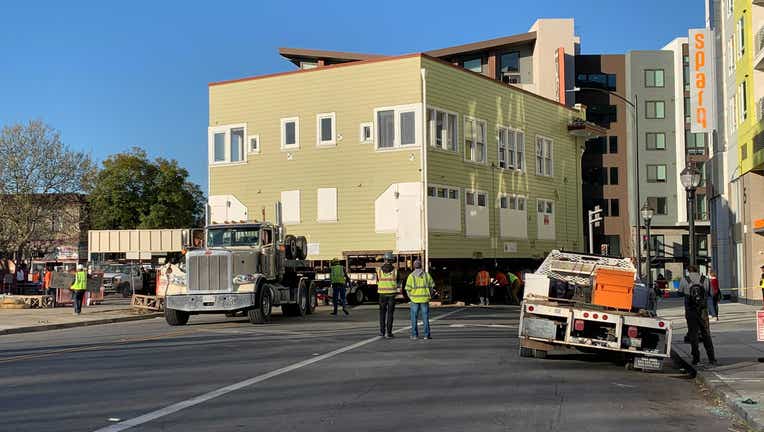 SAN JOSE, Calif. - A historic old San Jose apartment building is moving down the street after spending its first 110 years or so near the corner of South First and East Reed streets.

On Sunday morning, the two-story Pallesen Apartment building, a Mission Revival-style four-plex built in 1910, will be hooked onto the back of a semi-truck for the slow three-block drive to its new home at East Reed Street and South Fourth Street.

Contractors have placed a system of steel I-Beams under the building and will be placing a group of hydraulic wheeled dollies under the beams in order to roll the building out on to Reed Street, said Patti Wang Cross, a spokeswoman for Habitat for Humanity East Bay/Silicon Valley.

"Then a semi-truck will be pulling the building on the dollies to get it down the road," Wang Cross said.

Once safely back on solid ground, the building will be renovated and converted into for-sale affordable housing.

The whole $1.6 million project is being spearheaded by Habitat for Humanity East Bay/Silicon Valley and the Preservation Action Council of San Jose, with help from the City of San Jose and developer KT Urban.

The building has long been considered a special part of the neighborhood and features design elements from the Prairie-style, Craftsman and Mission schools of architecture, said Ben Leech of the Preservation Action Council.

It was built for Christian Pallesen, a Danish immigrant and local lumber mill foreman, and his wife, Lillie, by the team of Frank Delos Wolfe and Charles McKenzie, prominent Bay Area architects, Leech said.

The Pallesens lived in one unit and rented the others out to local working-class people, he said.

"It's always has been working-class affordable housing, so for it to continue in that role is sort of poetic justice," Leech said.

Over the years, the building's tenants have included farm workers, clerks, salesmen, at least one waitress and a man, Gerald Doyle, who worked as a printer for the then-named San Jose Mercury newspaper, according to a history of the property filed with the California Office of Historic Preservation.

KT Urban gave the building to Habitat for Humanity and the city kicked in a $250,000 loan with the idea that it would be relocated to make way for a new mixed-use tower project.

San Jose also sold the lot where the building will end up to Habitat for Humanity for $1.

Without these efforts, the building would have simply been demolished, since it doesn't meet the technical requirements for historic preservation.

According to an agreement with the city, the renovated units will be sold to people earning less than 80 percent of the area median income and priced at between 37 percent to 45 percent of current market rates -- which means people who qualify could buy one for about $232,000.

Crews will start prepping the building for its move at about 7 a.m. Sunday and the entire journey to its new location should take roughly five hours, Wang Cross said.