Feeling storm fatigue? You're not alone

Emergency managers realize Northern California residents may have storm fatigue setting in, but are stressing it's important you stay vigilant through this weekend's rain.

OAKLAND, Calif. - Though California has been in a drought for years, the state has also gotten its share of flooding and weather – like we're getting now.

But flooding and torrential rains is nothing new.

The Department of Water Resources in California, which is responsible for the state's water resources, systems, and infrastructure, has been tracking this flooding for more than 160 years.

In fact, the agency has kept pictorial archives of California's biggest floods dating back to 1862.

Floods have hit Sacramento, Oroville, the Yuba River, Ventura County and the Andrus Islands in Isleton, Calif., among other cities.

The photos are eerily similar in that each time it floods, levees break, backyards flood and crews come out with sand bags trying to shore up slipping earth.

We've compiled some of those images with courtesy to the DWR. 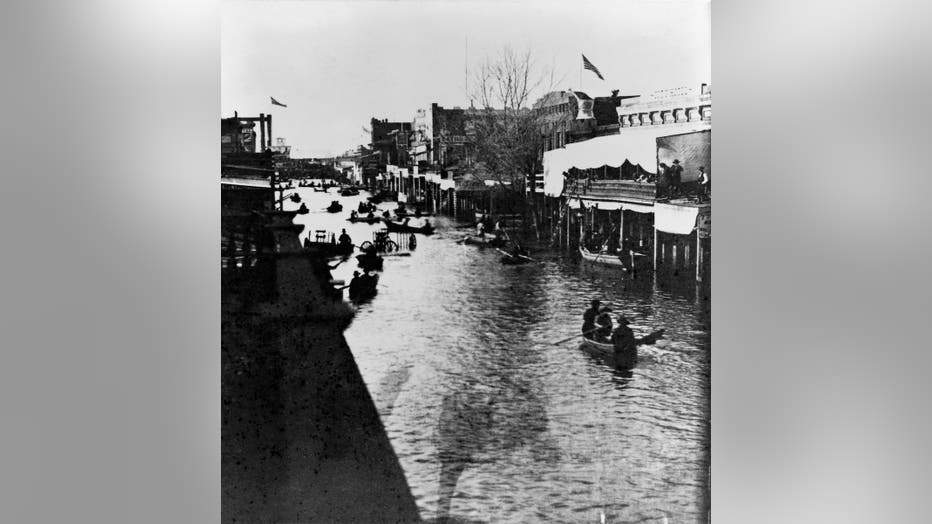 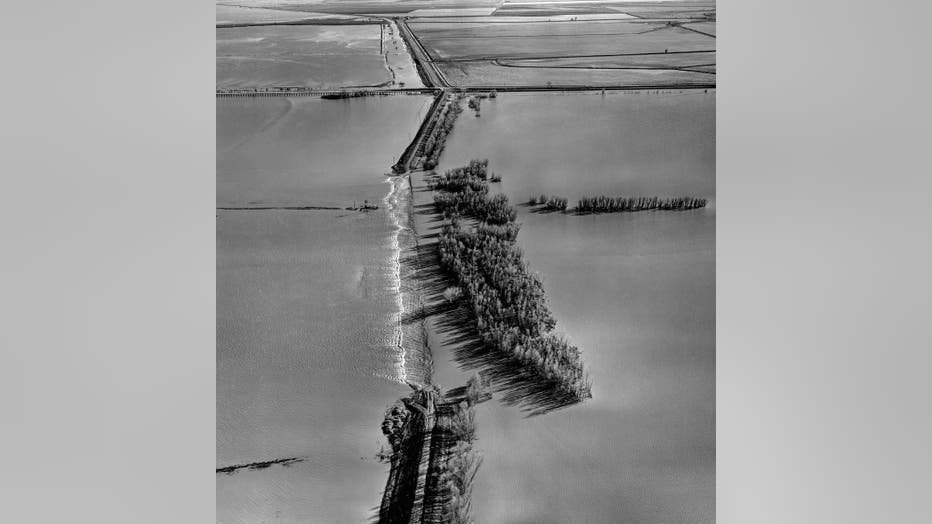 The aerial view looks north toward the Cobble Weir within the Cache Creek Settling Basin during floodwater conditions in Yolo County just east of Woodland, Calif. A series of storms from Jan. 23 to Feb. 16 brought large amounts of precipitation to No 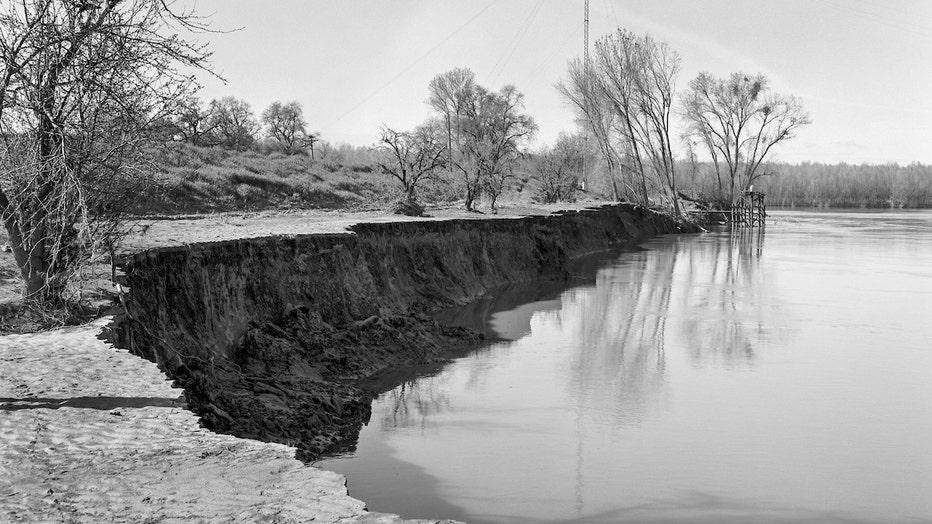 East levee erosion on the Sacramento River 3.8 miles upstream of Colusa, California in Colusa County. A series of storms from January 23 to February 16 brought large amounts of precipitation to Northern California and produced damaging floods, partic 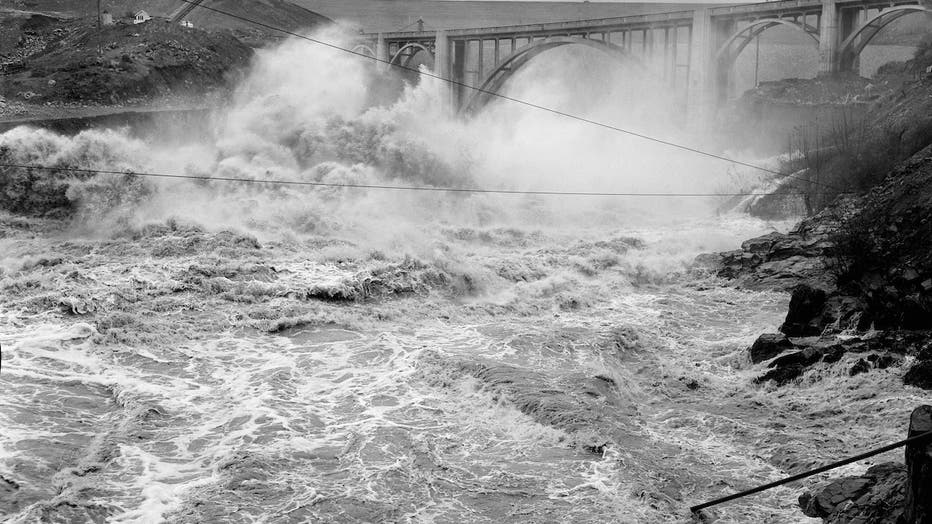 Oroville Dam embankment still under construction, as floodwaters from the Feather River tributaries are discharged through the diversion tunnels near the abutment of the Hansel's Bridge in Butte County. The heaviest rain from the massive Northern Cal 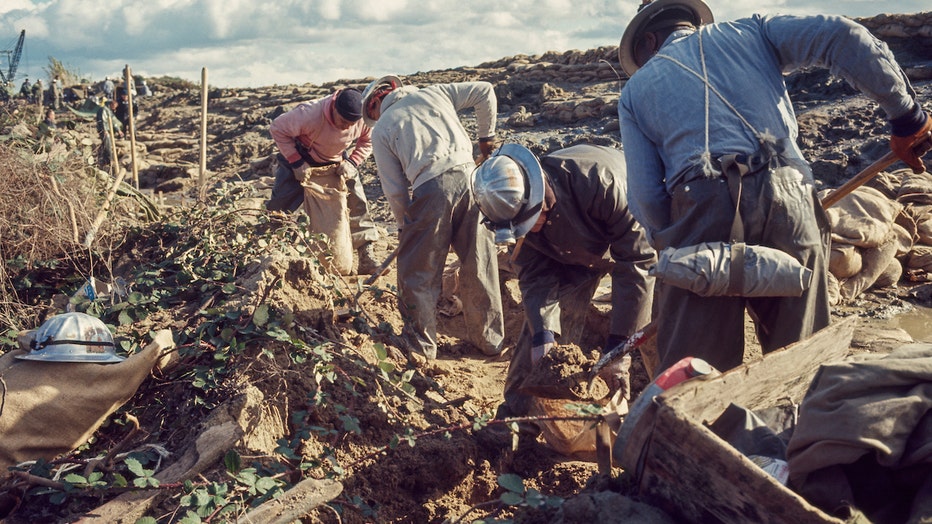 A levee maintenance crew fills sandbags as they fight high tides and winds along the San Joaquin River to protect Twitchell Island in southern Sacramento County during the massive Northern California flood of 1964. The storm hit the North Coast on De 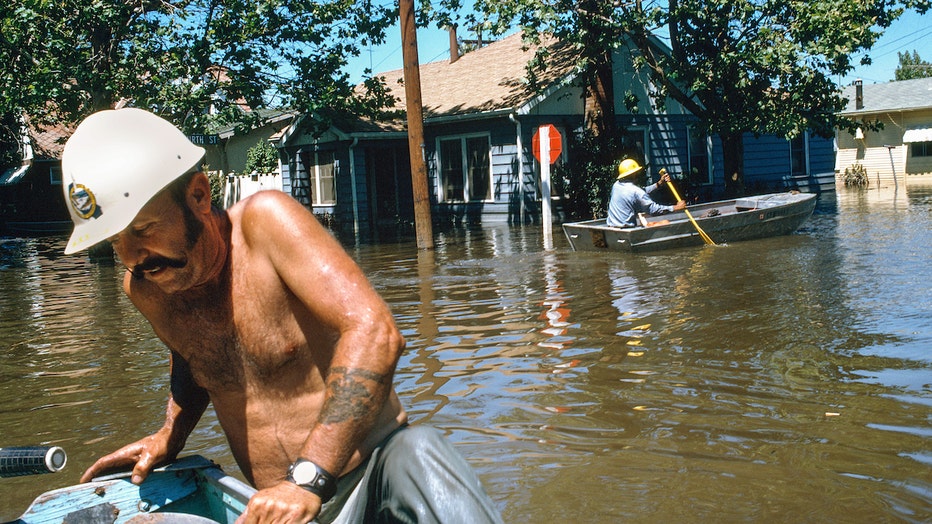 Emergency workers survey the flood conditions at the intersection of A Street and Fourth Street in the community of Isleton, Calif., after a levee breached four miles to the south in the vicinity of the Spindrift Marina on June 21, 1972. Much of the 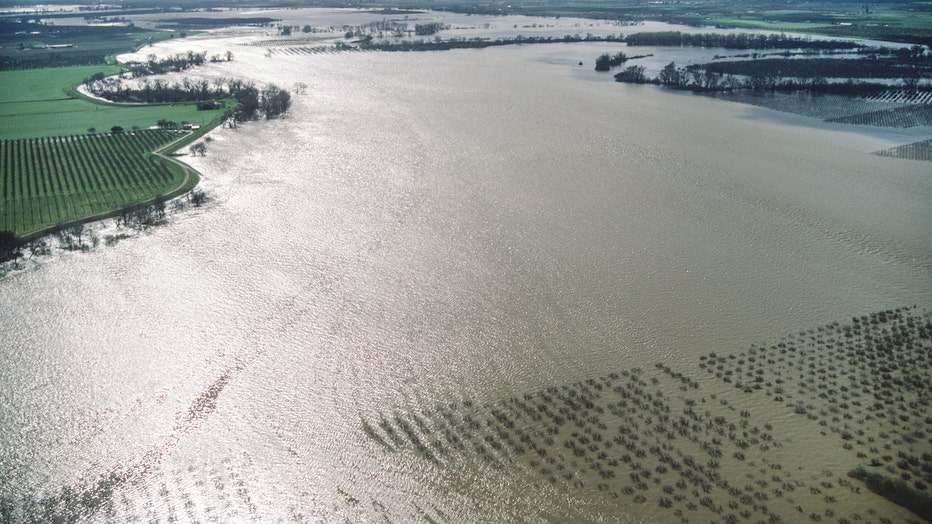 This aerial view looks south as the east and west levees of the Feather River contains the floodwaters just north of Marysville and Yuba City during the massive Northern California flood of 1986. The Sacramento Valley and the Sierra Nevada mountain r 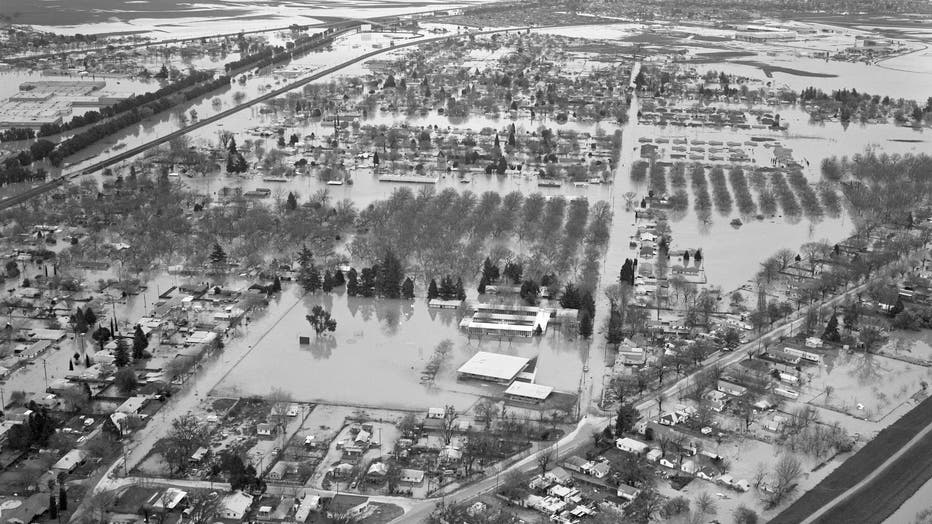 During the massive Northern California flood of 1986, the south levee of the Yuba River was breached Thursday evening February 20, several hundred feet to the west of the Union Pacific rail line. High water forced thousands of residents to evacuate t 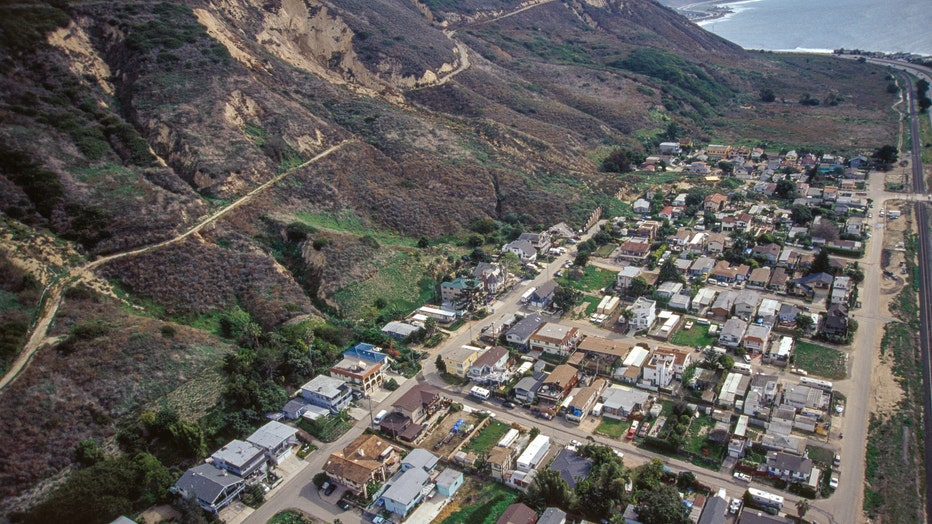 An aerial shows the after effects of a landslide that hit this neighborhood a year earlier on Jan. 10, 2005, which killed 10 people and damaged dozens of homes in this small coastal community of La Conchita, Calif. The cluster of homes in Northern Ve 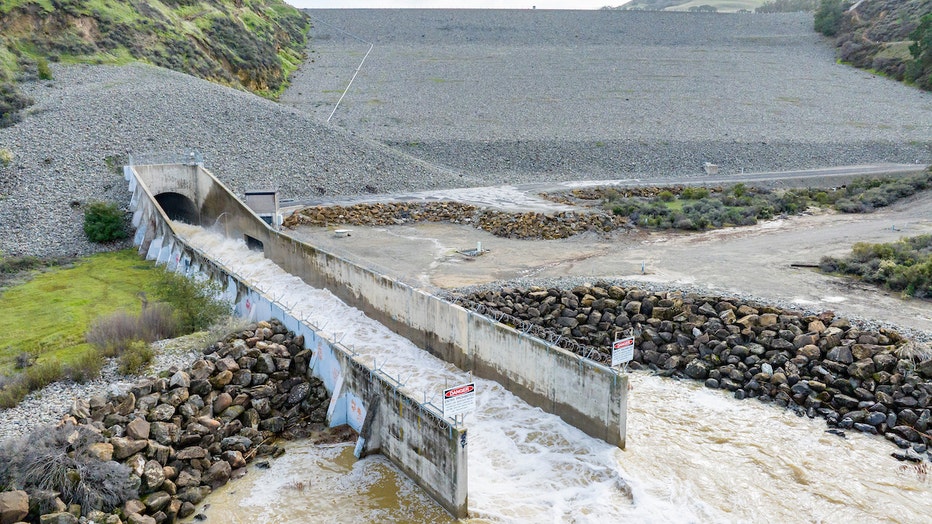 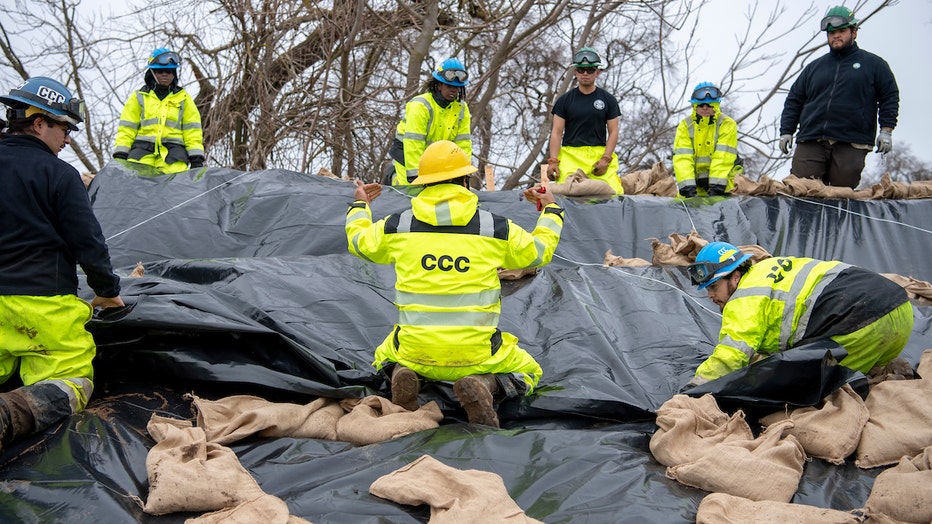 Members of the California Conservation Corps CCC preforming emergency repair to damage sections of a levee along the Cosumnes River in Wilton, California. The repair work is being overseen by Saskia Donovan and Marvin Marshall Flood Fight specialist