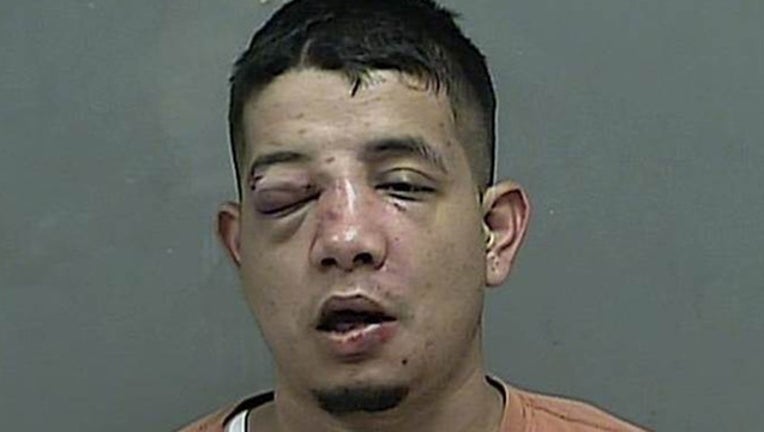 FOX5NY - A home invasion went horribly wrong for a man who tried to rob a woman.  Police say the diminutive 52-year-old woman who lives there grabbed a bat and started hitting him in the face.

It happened in Kingsport, Tennessee.  Police say on Saturday night the woman answered a knock at her door to find a woman holding a flyer about a lost dog. As soon as she opened the door, a masked man stepped into the doorway, grabbed her arm, and attempted to pull her outside. When that failed, police say the masked man pushed the resident back inside the home and shouted, “This is a robbery!”

A struggle ensued, during which time the 4'11" tall victim was able to partially remove the mask from the suspect’s face. In doing so, she immediately recognized the man as Joe Sotello, a longtime family friend. She says she also noticed what appeared to be a handgun tucked in Sotello’s waistband.

She grabbed a baseball bat from behind the door and fought back in what police described as a "clearly justifiable self-defense."

Two 18-year old females were also in the house and came to the woman's defense.  Together, the three women physically drove Sotello out of the house and onto the front lawn.

The woman who had been holding the flyer took off in a car befoer Sotello could get into it.  She was later identified to be  Sotello’s girlfriend.

Sotello was arrested for aggravated robbery, aggravated burglary and taken to a local hospital for medical clearance before sent to the Kingsport City Jail.

After giving several false statements regarding the incident and his whereabouts, police say that Sotello eventually confessed to his crime, stating that he “had been going through some hard times.”

Police say the victim was a foot shorter and 100 pounds lighter than the suspect but that didn't stop her from teaching him a painful lesson.