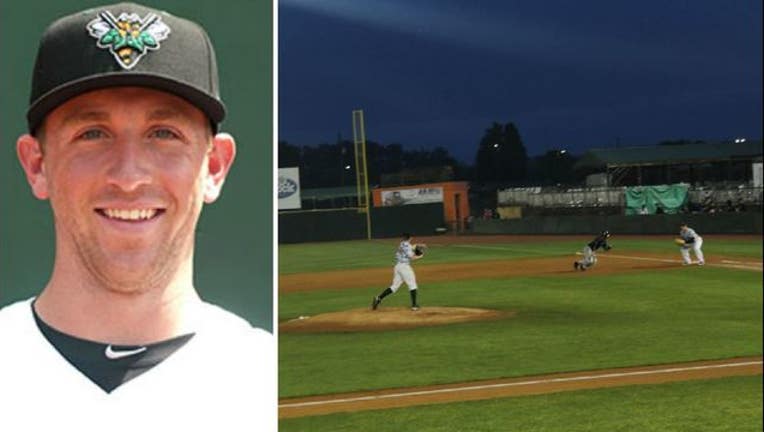 WALNUT CREEK, Calif. (KTVU) - Domenic Mazza is a San Francisco Giants pitching prospect from Walnut Creek. On opening day this season, he made his ESPN SportsCenter debut when he gave up a home run to former Heisman Trophy honoree Tim Tebow. It was Tebow’s first professional at-bat. This moment was superlatively surpassed on Tuesday when he tossed the first perfect game in South Atlantic League history.

The 22-year-old left-hander with the High-A Augusta Greenjackets retired all 27 batters he faced, propelling his team to a 9-0 victory. He was flawless. Never before had a SAL pitcher tossed a complete 9-inning game, let alone a perfect one. Generally, at this level, pitchers are kept on a fairly constricted pitch count. But it didn’t matter for Mazza. He needed just 85 pitches and struck out nine along the way.

Mazza attended Clayton Valley Charter High School in Concord before taking his talent to UC Santa Barbara, where he played for three years before being selected by the Giants in the 22nd round of the 2015 draft.

On Tuesday, the nerves managed to lay dormant until he was one out away from writing history. “As soon as we got two outs, I started to feel it a little bit and get nervous,” said Mazza, per Kelsie Heneghan of MiLB.com. But it was short-lived. Just like the majority of his outing, he motored through quickly.

Standing as the last hurdle, Lexington Legends’ Rick Aracena jumped on the second pitch and lifted one into shallow right-center field. Nerves turned to elation. The coaching staff, creeping out of the dugout before the ball finished descending, knew what this meant. Greenjackets’ center-fielder stood under the fly ball and when it hit his glove the feat was official. A barrage of celebratory jumps in unison, upside down water jugs and superior bear hugs paraded around the infield.

“It was just pure joy and happiness with my teammates,” Mazza said, per Heneghan.

It’s likely the young southpaw put his recent media initiation in his rearview mirror by now. And he was dialed in from the jump, mixing speeds, and showing good command with all his pitches. His pitching coach, Clay Rapada, quickly recognized he was operating at a dominating level. His location was superb, affording him 60 strikes on 85 pitches.

"The Lexington hitters were aggressive, which I liked, just because it helped me pound the zone more and get quick outs, which allowed me to work deep into the game," Mazza said, per Heneghan. "My slider was better than it has been and I was just able to mix speeds and keep them off balance."

And it came with heavy, late-inning perspiration. Mazza had to ride out the chaos of a bench clearing eighth inning following a Kelvin Beltre home run—a fairly offensive move considering the magnitude of Mazza’s performance. Three players were ejected as a result. But Mazza’s unshakeable focus weathered the delay and he went on to retire the next six batters he faced to etch him self in minor league history.

But this season’s national attention isn’t entirely new to Mazza. He drew notice from many when he finished second in the World Long Drive Championship in Mesquite, Nevada. He smacked one an astounding 437 yards in the final event, according the the San Francisco Chronicle. He was just 16.

Mazza was awarded a $70,000 check for his display, but declined to preserve his amateur golf and baseball status. He’s 12-5 in his professional career with a 3.30 ERA in 28 appearances. A perfect game has been recorded just 23 times in Major League Baseball. The new bullet point on Mazza’s resume shows one as he continues his quest for the big stage.