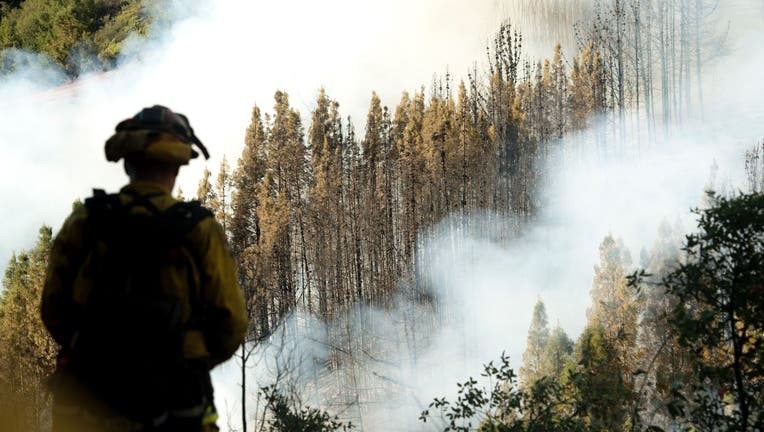 A firefighter looks on while flames consume brush and trees in the Santa Cruz Mountains near Morgan Hill, California on September 27, 2016. The Loma Fire has charred more than 1000 acres and burned multiple structures in the area. / AFP / Josh Edelso

Evacuees can call (831) 454-2181 to apply for the program or renew their seven-day reservation if they are already at a hotel and within 24 hours of their reservation's check-out date.

With evacuation orders lifted in many areas, those now in a hotel must check out once they are able to return home.

Evacuees are required to check out on the following morning of an announced evacuation ending even if the seven-day reservation has not expired.

WATSONVILLE, CA - AUGUST 19: Evacuee Susan Powell of Boulder Creek spends time with her husband, Donald, in their car at the Santa Cruz County Fairgrounds on Aug. 19, 2020, in Watsonville, Calif. The Powells are staying in their car during the day to

"The repopulation process is ongoing and evacuees should maintain awareness of current evacuation orders," the county said in an announcement. "If you have been evacuated but have not been permitted to return home, you may remain in your hotel for the remainder of your seven-day reservation duration."

Those still under evacuation order and within 24 hours of the end of their seven-day reservation should call the hotline for assistance in renewing their reservation.

To see if an area's evacuation order has been lifted, check the online map.

The hotel program is managed by the State Department of General Services and supported by the Federal Emergency Management Agency.