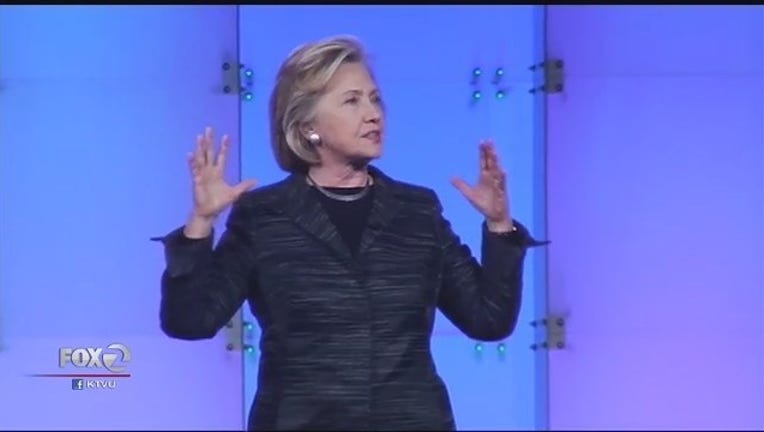 WASHINGTON (AP) — A House committee investigating the Benghazi, Libya, attacks issued subpoenas Wednesday for the emails of Hillary Rodham Clinton, who used a private account exclusively for official business when she was secretary of state — and also used a computer email server now traced back to her family's New York home.

The subpoenas from the Republican-led Select Committee on Benghazi demanded additional material from Clinton and others related to Libya, spokesman Jamal D. Ware said. The panel also instructed technology companies it did not identify to preserve any relevant documents in their possession.

The development on Capitol Hill came the same day The Associated Press reported the existence of a personal email server traced back to the Chappaqua, New York, home of Clinton. The unusual practice of a Cabinet-level official running her own email server would have given Clinton — who is expected to run for president in the 2016 campaign — significant control over limiting access to her message archives.

The practice also would complicate the State Department's legal responsibilities in finding and turning over official emails in response to any investigations, lawsuits or public records requests. The department would be in the position of accepting Clinton's assurances she was surrendering everything required that was in her control.

"I want the public to see my email. I asked State to release them," according to the tweet from @Hillary Clinton. "They said they will review them for release as soon as possible."

Congress said it learned last summer about Clinton's use of a private email account to conduct official State Department business during its investigation of the Benghazi attacks on a U.S. mission in which four Americans died.

"It doesn't matter if the server was in Foggy Bottom, Chappaqua or Bora Bora," House Speaker John Boehner said. "The Benghazi Select Committee needs to see all of these emails, because the American people deserve all of the facts."

The chairman of the Benghazi committee, Rep. Trey Gowdy, R-S.C., told reporters: "I want the documents. Sooner rather than later."

Democrats called it a fishing expedition.

"Everything I've seen so far has led me to believe that this is an effort to go after Hillary Clinton, period," said Rep. Elijah Cummings of Maryland, the top Democrat on the committee.

The questions about Clinton's email practices left the Obama administration in an awkward position. At one point, the State Department directed reporters to contact Clinton, who has not publicly commented about her emails. The White House said it was her responsibility to make sure any emails about official business weren't deleted from her private server.

Meanwhile, the AP said it was considering legal action under the U.S. Freedom of Information Act against the State Department for failing to turn over some emails covering Clinton's tenure as the nation's top diplomat after waiting more than one year. The department has never suggested that it doesn't possess all Clinton's emails.

It was not immediately clear exactly where Clinton's computer server was run, but a business record for the Internet connection it used was registered under the home address for her residence as early as August 2010. The customer was listed as Eric Hoteham.

An aide to then-first lady Clinton was identified in a 2002 congressional report as Eric Hothem, whose name is spelled differently than in the Internet records. Hothem, a financial adviser in Washington, was not available to take an AP reporter's phone call at his office Wednesday. He was a special assistant to Clinton as far back as 1997 and considered one of the family's information technology experts.

In most cases, individuals who operate their own email servers are technical experts or users so concerned about issues of privacy and surveillance they take matters into their own hands.

Clinton — who emailed so frequently using her BlackBerry as secretary of state that it became an Internet meme — is particularly sensitive about disclosures of personal files based on her experiences in confronting congressional investigations and civil lawsuits during her husband's election and presidency and her own roles as first lady, senator, presidential candidate and Cabinet official.

State Department spokeswoman Marie Harf said Clinton as Cabinet secretary never used a government email account on the agency's separate network for sharing classified information, which Clinton would have been prohibited from forwarding to her private email account.

"She had other ways of communicating through classified email through her assistants or her staff, with people, when she needed to use a classified setting," Harf said.

Most Internet users rely on professional outside companies, such as Google Inc. or their own employers, for the behind-the-scenes complexities of managing their email communications. Government employees generally use servers run by federal agencies where they work. Clinton's email practices appear to be far more sophisticated than some politicians, including Mitt Romney and Sarah Palin, who were found to have been conducting official business using free email services operated by Microsoft Corp. and Yahoo Inc.

Clinton has not described her reasons for using a private email account — hdr22@clintonemail.com, which appears to include a nod to her middle name, Diane. A spokesman for her did not respond to requests seeking comment from the AP on Tuesday or Wednesday.

Operating her own server would have afforded Clinton additional legal opportunities to block government or private subpoenas in criminal, administrative or civil cases because her lawyers could object in court before being forced to turn over any emails. And since the Secret Service was guarding Clinton's home, an email server there would have been well protected from theft or a physical hacking.

But homemade email servers are generally not as reliable, secure from hackers or protected from fires or floods as those in commercial data centers.

The Hoteham registration is also associated with a separate email server, presidentclinton.com, and a nonfunctioning website, wjcoffice.com, all linked to the same residential Internet account as Mrs. Clinton's email server. The former president's full name is William Jefferson Clinton.

Hothem, the former Clinton aide, surfaced in at least two Clinton administration controversies. A congressional report in 2002 investigating pardons said a Citibank account linked to Hothem wired $15,000 to President Clinton's brother, Roger, in March 2001, while investigators were trying to compel Roger Clinton to testify about his role in several pardon cases. The president's lawyer told investigators the money came from a personal account of the Clintons and was intended for Clinton's brother to hire a lawyer.

In early 2001, Hothem was also named by a former White House chief usher as saying the Clintons were permitted to take furniture when they left the White House that later was determined to belong to the government.

Sue Hothem, his wife, is a well-known fundraiser and political consultant in Washington. Last year, she was named a vice president for the technology lobbying group TechNet. It said she previously headed development efforts for the Democratic Leadership Council and the Progressive Policy Institute.

Mrs. Clinton's email options included using an official State Department account or even a secret agency email address, which the AP revealed in 2013 as a common practice across the U.S. government and by previous administrations. Many senior U.S. officials use alternate addresses that aren't disclosed to the public for official business so they are not inundated with unwanted messages.

But the State Department's email system might not have been attractive to Clinton because it is frequently targeted by hackers. The AP revealed in 2006 and 2014 that the agency had suffered significant electronic break-ins. In the most recent incident, the department took the unprecedented step of shutting down its entire unclassified email system. While Clinton was secretary of state in 2010, a U.S. soldier, Chelsea Manning, stole 250,000 diplomatic cables and turned them over to WikiLeaks, which published them online.