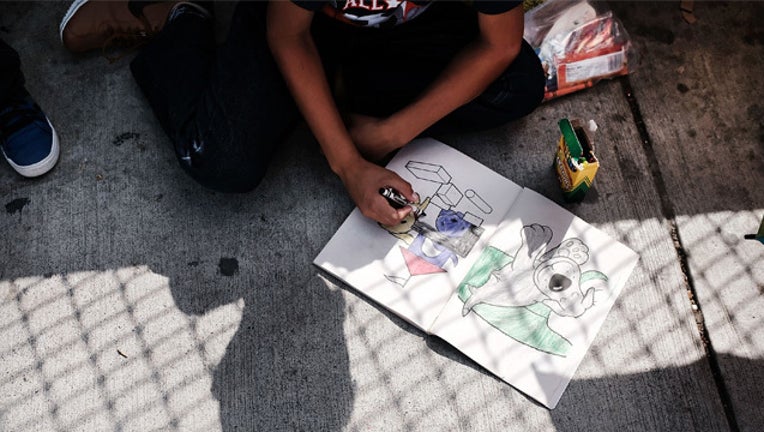 A Honduran child works in a coloring book while waiting with his family along the border bridge after being denied entry from Mexico into the U.S. on June 25, 2018 in Brownsville, Texas. (Photo by Spencer Platt/Getty Images)

The tent city in Tornillo, Texas, is shutting down, and all tents and equipment will be removed from the site by the end of January, said Krista Piferrer, spokeswoman of BCFS Health and Human Services.

The U.S. Department of Health and Human Services, which oversees the care of migrant children, did not provide further details. But a spokesman said last month that the center had stopped receiving new referrals.

The Tornillo facility with capacity for 360 children opened in June in an isolated pocket of the Texas desert. It expanded into a guarded detention camp that held more than 2,700 largely Central American teens in rows of canvas tents.

At that point, more people were detained in Tornillo's tent city than in all but one of the nation's 204 federal prisons. Rising from the cotton fields and dusty roads not far from the dark fence marking the border between the U.S. and Mexico, the camp had rows of beige tents and golf carts that ferried staffers carrying walkie-talkies. Teens with identical haircuts and government-issued shirts and pants could be seen walking single file from tent to tent, flanked by staff at the front and back.

Politicians and advocates for immigrants and human rights protested at the site over the seven months it was open, with some even taking up vigils.

"It was chilling to see thousands of children locked up in a tent prison in the desert. It's great news that those children have finally been moved out of Tornillo," said Oregon Sen. Jeff Merkley, a Democrat who in December introduced the Shut Down Child Prison Camps Act.

The tent city came under fire in November after a report that the Trump administration had waived FBI fingerprint checks for the 2,100 staff working there and allowed BCFS to staff just one mental health clinician for every 100 children. Lawmakers called for stricter background checks, more mental health support and a public hearing to further investigate problems at Tornillo raised by a federal watchdog report and an Associated Press investigation.

Some lawmakers said they were pleased to hear about the closure of the facility but warned that other detention centers holding migrant teens are still open.

"It's a weight off my shoulders to have children now with family members. If you're trying to use kids to fix a broken immigration system, then you have a real problem," said Rep. Will Hurd, a Texas Republican whose district includes the detention camp.

Other representatives expressed concerns about the expansion of other detention facilities for migrant youth. U.S. Rep. Frederica Wilson, a Florida Democrat, said she is worried about increasing the number of beds in a facility south of Miami. Last month, the government announced it would house more teens in the Homestead shelter, expanding the total number of beds from 1,350 to 2,350.

"Instead of putting these children with family and a public school, they are warehousing these kids," Wilson said. "For most of these children that we have in detention, we have sponsors that have volunteered to take them and to sort of act as foster parents until their asylum cases have been heard."

"We cannot forget that there continue to be thousands of children detained in facilities that fail to meet the basic medical, mental health and educational needs of children," Desai said. "These children should be home with their families."