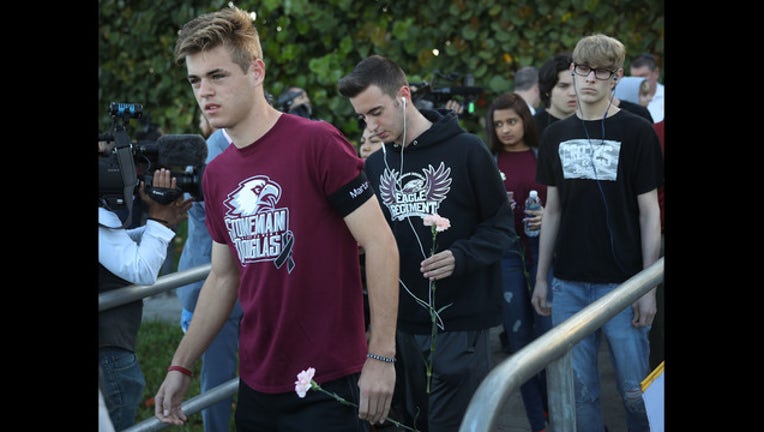 Students wait at a crosswalk as they arrive to attend classes at Marjory Stoneman Douglas High School for the first time since the shooting that killed 17 people on February 14 at the school. (Photo by Joe Raedle/Getty Images)

PARKLAND, Fla. (AP) -- Students and teachers hugged and cried Wednesday as they returned under heavy police guard to Marjory Stoneman Douglas High for the first time since a teenager with an assault rifle killed 17 people and thrust the huge Florida school into the center of a renewed national gun debate.

The half-day began with fourth period so that the nearly 3,300 students could first be with the people they were with during the shooting two weeks ago.

"In the beginning, everyone was super serious, but then everyone cheered up and it started being the same vibes we had before the shooting. People started laughing and joking around," said Kyle Kashuv, a junior who said he hugged every single teacher.

On the way in, teens were guarded by hundreds of police officers. The police were accompanied by comfort animals, including dogs, horses and a donkey. One of the horses had "eagle pride" painted on its side. A nearby woman held a sign offering "free kisses."

After school dismissed, members of the Guardian Angels wearing their trademark red berets lined the streets at a crosswalk.

Kashuv said he was amazed by the outpouring of support from the community, including the police presence, the animals and many well-wishers. There were letters from all over the world and "banners on every single wall," he said.

Some of the officers carried military-style rifles, and Superintendent Robert Runcie said the police presence would continue for the remainder of the school year. The heavy arms rattled some students.

"This is a picture of education in fear in this country." The National Rifle Association "wants more people just like this, with that exact firearm, to scare more people and sell more guns," said David Hogg, who has become a leading voice in the student movement to restrict assault weapons.

About 150 grief counselors were on campus "to provide a lot of love, a lot of understanding" and to help students "ease back" into their school routines, Runcie said.

The freshman building where the Feb. 14 massacre took place remained cordoned off.

Students were told leave their backpacks at home. Principal Ty Thomas tweeted that the school's focus would be on "emotional readiness and comfort, not curriculum."

"It's not how you go down. It's how you get back up," said Casey Sherman, a 17-year-old junior. She said she was not afraid to be return, "just nervous."

Many students said the debate over new gun laws helped them process the traumatic event and prepared them to return.

Alexis Grogan, a 15-year-old sophomore, was concerned that it might be too soon to go on as usual without slain friends such as Luke Hoyer, who sat two seats behind her in Spanish class.

"Seeing everyone was good, but emotionally I was in shambles. I probably broke down into tears 10-plus times and had to walk out of my classes multiple times throughout the day," she said.

As classes resumed, Dick's Sporting Goods, a major U.S. retailer, announced that it would immediately halt sales of assault-style rifles and high-capacity magazines at all of its stores and ban the sale of all guns to anyone under 21. The company's CEO took on the NRA by demanding tougher gun laws. Later Wednesday, Walmart announced that it would no longer sell firearms and ammunition to people younger than 21 and would also remove items resembling assault-style rifles from its website.

At the Florida Capitol, a House committee voted Tuesday in favor of a bill to raise the minimum age to buy long guns from 18 to 21 and to create a program allowing teachers to carry concealed weapons in classrooms if their school district allows it. Those teachers would receive law-enforcement training and get deputized by the local sheriff's office.

State lawmakers continued their investigation of how the suspected shooter, Nikolas Cruz, managed to slip through local law enforcement despite previous warning signs.

The Florida House voted Wednesday to subpoena records from Broward County and the school board, as well as sheriff's offices in Broward and Palm Beach counties and the city of Coral Springs. Among items requested from the school were documents on a mentoring program aimed at alternatives to the juvenile justice system. Critics have suggested the program led to lenience for Cruz, but the superintendent said Wednesday that the suspect was never was part of the program.

Florida Gov. Rick Scott said he hopes a gun and school-safety bill is passed before the annual legislative session ends March 9. The measures he proposed did not include arming teachers, but he declined to say Tuesday whether he would veto a sweeping package that includes that provision.

The Broward superintendent has spoken out against the idea of arming teachers.

Marion Hammer, a lobbyist for the National Rifle Association and Unified Sportsmen of Florida, said she supports school security and keeping guns out of the hands of the mentally ill, but "guns are not the problem."

Kashuv said he was most moved by a tattoo his teacher got that said "MSD Strong" with a giant eagle.

"The shooting doesn't define us," he said. "We're really moving past it and trying to heal right now."