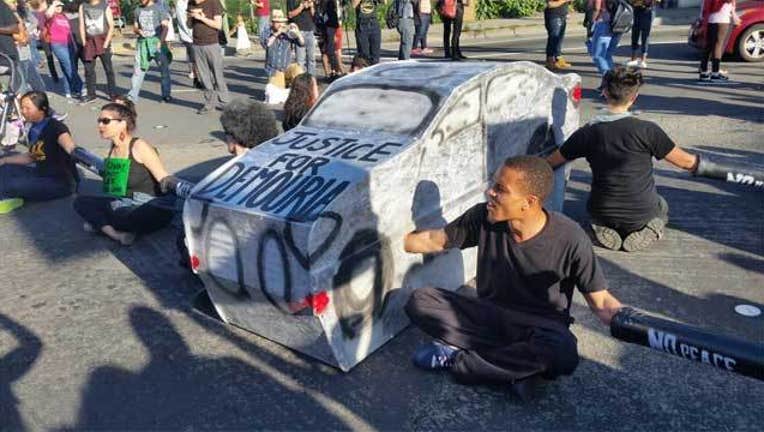 OAKLAND (KTVU and wires) -- A vigil in honor of a Hayward man shot and killed by an Oakland police officer on June 6 turned into a march Friday, with several hundred people traveling on Lakeshore Boulevard along Lake Merritt toward International Boulevard, according to police.

Earlier in the evening, a group of protesters blocked the intersection at the corner of Lakeshore and Lake Park avenues for around two hours, blocking traffic in the area.

Police are on hand but have maintained a relatively light presence during the protest and march so far, with no riot gear visible.

The 6 p.m. vigil, which was sponsored by the Anti Police-Terror Project in partnership with the family and friends of Demouria Hogg, was intended to create a space for community members to deal with the trauma of police shootings, project member Cat Brooks said.

"Whether or not people knew the victim, (officer-involved shootings) create trauma in the community," Brooks said.

She said the vigil was also meant to put pressure on police and city officials to provide the family with an explanation for his death.

"I think that there were a million and one ways for the police to extricate him from the car that didn't have to result in him being killed," Brooks said.

Members of the Anti Police-Terror Project and others in the community have questioned the police department's account of what led to Hogg's death the morning of June 6, when officers found Hogg sleeping or unconscious in the driver's seat of a BMW.

Police said they tried for roughly an hour to wake Hogg, using a loudspeaker, then beanbag rounds, and finally a large metal pole to break the passenger side window of his car in an attempt to get his attention.

On the last attempt, officers approached the car and when Hogg awoke, a confrontation ensued, which ultimately led to his death, according to police. Police have not said what happened during the confrontation.

The group has launched their own investigation into the shooting, according to Brooks. Brooks said eyewitnesses have already come forward and they will be providing statements to the family.

A lawyer for the officer who shot Hogg, Steven Betz, has said his client acted appropriately because she saw him reaching for a gun in the passenger seat of the car.

The officer, who has only been on the force for 18 months, fired two shots at Hogg because he posed "a lethal threat," and it only would have taken him seconds to pick up the gun and fire at officers, Betz said.

Another officer used a Taser in attempt to subdue Hogg, police said.

Brooks said the vigil is also meant to combat what she called the "demonization" of Hogg, who has had several prior drug-related convictions and was on probation at the time of his death.

"The police didn't know who was sitting in that car until they killed him," Brooks said. "Nothing he did was a capital offense."

Hogg was "probably terrified" when he awoke to officers surrounding his car, Brooks said.

"This pattern is all too familiar," Brooks said. "Police do not have a license to shoot people simply for possessing a firearm."

Brooks described Hogg as a father of three children, who she knew from seeing him at youth basketball games and school functions.

The Anti Police-Terror Project is calling on city leaders to immediately release the name or names of the officer or officers involved in the shooting, release footage from body cameras, dashboard cameras and other surveillance footage, release the coroner's report and police report to the family and ask the state Attorney General to appoint a special team to investigate the shooting.