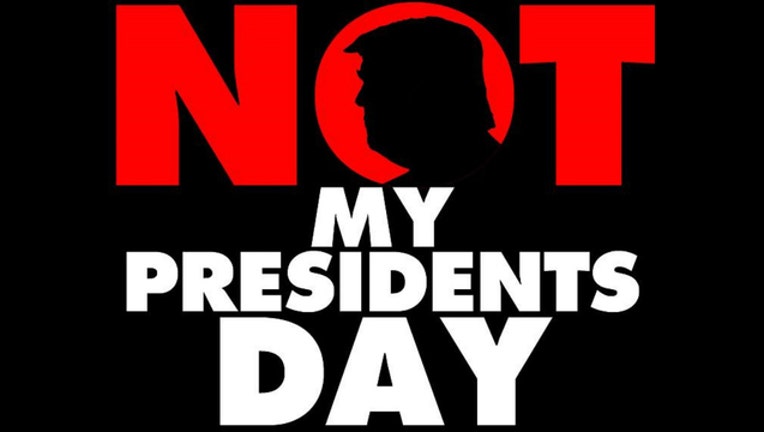 Monday's rally is one of several occurring across the U.S. dubbed "Not My President's Day."

Protesters are speaking out against White House policies on issues ranging from immigration to the environment and health care.

Several hundred rallied across the river from the Trump Tower, shouting "Hey, hey, ho, ho, Donald Trump has got to go."

Rebecca Wolfram of Chicago, who's in her 60s, said concerns about climate change and immigrant rights under Trump prompted her to start attending rallies.

"I'm trying to demonstrate as much as possible until I figure out what else to do," said Wolfram, who held a sign that said "Old white ladies are really displeased."

Marilyn and Marc Lawlor brought their three children to the rally from the Chicago suburb of North Barrington.

Marilyn Lawlor says "we want our kids to see that America is a place for everyone."

Edwin Yohnka is director of communications and policy for the ACLU of Illinois. He says the organization will fight the Trump administration in court and urged the crowd to do their part.

Yohnka says "The only way we win is if we all do it together."

Thousands of demonstrators also turned out across the U.S. to challenge President Donald Trump.

The protests on the federal holiday didn't draw nearly as many people as the million-plus who thronged the streets following the Republican president's inauguration a month earlier, but the message was similar.

Thousands of flag-waving protesters lined up outside Central Park in Manhattan. Many in the crowd chanted "No ban, no wall. The Trump regime has got to fall." They held aloft signs saying "Uphold the Constitution Now" and "Impeach the Liar."

Nova Calise, one of the New York City organizers, said Presidents Day was "a perfect time to protest the person that's currently holding the title of President of the United States," adding Trump didn't share the values of those demonstrating Monday.

A rally in downtown Los Angeles also drew thousands. Demonstrators there called attention to Trump's crackdown on immigration and his party's response to climate change and the environment. Organizers said they chose to rally on the holiday as a way to honor past presidents by exercising their constitutional right to assemble and peacefully protest. They chanted: "Love not hate makes America great."

Dozens marched through midtown Atlanta for a rally named with a Georgia flavor: "ImPEACH NOW! (Not My) President's Day March."

Hundreds of protesters chanting "This is what democracy looks like" marched through Salt Lake City.

The Salt Lake Tribune reports that the crowd marched to push back against Trump and his administration's stance on such issues as the environment, immigration, free speech and Russia.

Some people raised signs that said "Not My President," while others held up a large American flag. Protester Reg Brookings warned the crowd that Trump is trying to divide the country by making such groups as immigrants the enemy.

A small but unruly group of protesters faced off with police in downtown Portland, Oregon.

The Oregonian/OregonLive reports the police confronted the crowd in front of the Edith Green-Wendell Wyatt Federal Building. Police took some people into custody.

Hundreds of Trump opponents and supporters turned out in Rapid City, South Dakota.

A larger anti-Trump faction stood on a street corner as part of a "Not My President" protest, similar to other demonstrations being held across the country. A group supporting the president lined up on a different corner at the same intersection. Police were on hand and the groups remained peaceful.