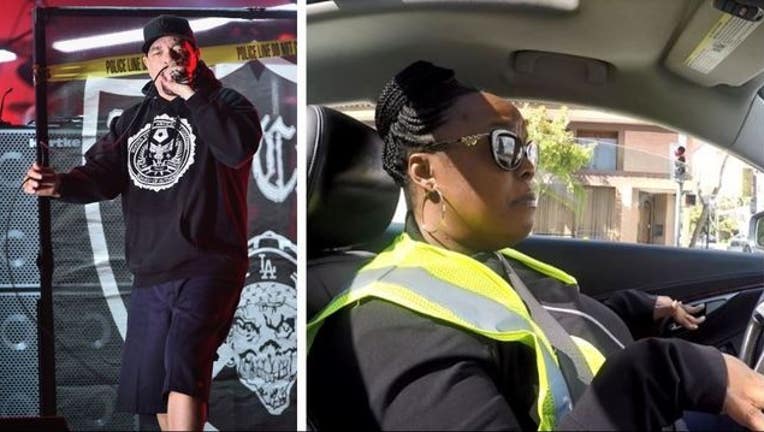 Recording artist Ice-T (left: Getty Images) told Amazon to give its uniforms drivers. Audrey P. (right) is an Amazon Flex driver who was pulled over by Pleasanton police. She said she wears a yellow vest to look official.

PLEASANTON, Calif. (KTVU) - Ice-T took to Twitter, telling Amazon give their drivers uniforms after he “almost shot” one of them because he didn’t know why the stranger "creeping up" to his crib. His advice not only lit up the internet but hit home with one Flex driver detained earlier this year by Pleasanton police.

“Message To Amazon: Now that you have regular people making your home deliveries.. Maybe they should wear a Vest with AMAZON DELIVERY on it,” the star tweeted on Tuesday. “I almost  shot a MF creeping up to my crib last night.... Just sayin.”

Ice-T caused a social media furor. And many agreed, saying things like “since the flex (sic) drivers don't have uniform folks see strange folks in their neighborhood a lot might think they are package thieves instead of delivery.  even uber and lyft folks have a sticker at least.  also nighttime delivery is just dangerous.”

Even Amazon's vice president of operations, Dave Clark, chimed in: "Just sayin … thanks for the suggestion. We MF’ing love you and our drivers." He cryptically mentioned that Amazon has technology to allow customers to track their packages, but didn't tackle the uniform issue.

Ice-T’s comments come at a time when the gig economy is both thriving and under fire as a countless number of “regular people” are picking up side jobs to make ends meet, but sometimes at their own peril. Many say they love the independent nature of these gig jobs, working their own hours for Amazon, Uber, Door Dash and the like. But many also complain that they drive and deliver at their own risk, with no built-in protections, employee benefits or health insurance.

And in the case of Amazon, they work with no company-issued uniform, which one Hayward driver said often leads to racial profiling. And, with Ice-T’s warning fresh in her mind, she fretted that not wearing a uniform could lead to much worse.

"A uniform would help," said Audrey P., who asked that her full name not be used so as not to face employment repercussions. "When you get into some of the mansions, people look at you."

Audrey, 40, is one such Flex driver who told KTVU during a recent ridealong that while she hasn’t been shot at, she did get into a tense situation where she was indeed concerned for her safety.

In February, she and her partner, both of whom are African-American women, were stopped by police after a woman in Pleasanton on Tapestry Lane called 911 to claim they had been stealing mail -- which she had not.

“I was crying,” Audrey said. “I was emotionally upset. It was humiliating.”

“It reminded me of other instances where black people, and I’m sure others, have had the police called on them, just randomly, saying they were bothered, or the person doesn’t fit in their neighborhood,” Audrey said. “Even the cops said, ‘What did you expect? This is Pleasanton.’ ”

She was questioned for about 20 minutes before being let go. Still, the detention shook her, and raises questions about the informality of the growing number of gig-economy jobs where independent contractors can choose when they work and what they wear. Audrey drives her own car and sports her own yellow safety vest so she can look “official.”

For its part, an Amazon representative told KTVU that “safety is a top priority” for its Flex drivers and that the beauty of being an independent contractor is not being told when to work or what to wear.

Still, Amazon gear, such as magnetic car stickers and T-shirts, are available for purchase, but it’s up to the drivers if they want to adorn the branding and pay for it themselves. This is true for many gig-economy companies, who offer, but don’t force, their logos on freelancers.

In addition, the representative said that drivers can flash their picture and route to any neighbor or officer who inquires by pulling up their virtual ID on the Amazon Flex app. Customers can follow their package route on the app to see that their delivery is on its way and not worry if the person in their driveway should be there or not. A customer service representative is available to help a driver out 24/7 if questions arise.

It’s unclear just how many times drivers of color have been detained, arrested or stopped because neighbors have called police on them. No one tracks those numbers.

What also can't be tracked: The number of overt and subtle looks Audrey say she gets because the color of her skin.

“I don’t think it’s racism all the time, but when you’re black, that’s where you go to,” Audrey said. “There’s just so much of it. Sometimes it’s very subtle. There is racism even if you’re not being called a  slur.”

She feels like she would get less negative attention if she looked like she worked for a company. And she's not the only one.

In a much-read piece in the Atlantic, author Austin Murphy wrote that one of his black colleagues, Will, “shows up for work wearing every Amazon-themed article of clothing he can get his hands on: shirt, ball cap, Amazon beanie pulled over Amazon ball cap.”

Murphy wrote: “I found that odd at first, but it makes good sense. If you’re a black man and your job is to walk up to a stranger’s front door—or, if the customer has provided such instructions, to the side or the back of the property—then yes, rocking Amazon gear is a way to protect yourself, to proclaim, “I’m just a delivery guy!”

Steven Tindall of the Gibbs Law Group in Oakland is suing Amazon Flex in a separate case where he is alleging the company is misclassifying its employees as independent contractors.

The uniform issue is just part of a larger problem, he said.

“What I think they’re saying is that ‘We don’t want to make them look like employees,’ ” Tindall said. “But they’re not independent contractors. If you’re doing the work of the company, then you are an employee.”

When asked about Audrey’s situation, Tindall said: “What should happen is that all of these people should be classified as employees. And if they were, they’d probably get a uniform.”

In court filings, Amazon responded to Tindall’s federal suit by arguing that Flex drivers download and accept the terms of service when signing up for the job.

Driving for Amazon Flex isn’t Audrey’s only job. She works full-time in Human Relations at a medical facility. But she needs the extra money. “I want to pay down my debt,” she said. "Living in the Bay Area is just really expensive.”

On a recent Friday afternoon, KTVU spent the afternoon with Audrey, driving about five hours through Contra Costa County, dropping off packages and navigating one of her twice-weekly "blocks," which are chunks of time that comprise a shift.

Her route took her to cookie-cutter apartment complexes, gated communities and farms in San Ramon, where median home prices are more than $1 million and Census figures show that more than 76 percent of the population is white and Asian, and about 2 percent is black.

Finding the right home on an Amazon route is often confusing. Apartments look alike. Address numbers are difficult to spot. Missed turns are made. And it’s true, many neighbors did look at Audrey as she drove around in circles, getting lost, looking up addresses and trying to figure out which home to deliver a package to.

Some neighbors asked if Audrey was lost, or if they could help. Others simply watched her enter their cul-de-sac, not taking their eyes of her until she dropped off the package and then left their sight.

But the stares weren’t necessarily because of the color of her skin, but because she was a stranger, looking for the right porch.

Still, Audrey was highly aware of her race -- and the juxtaposition of her surroundings -- especially when she drove down one rural road in the East Bay.

“Uh oh, an American flag,” Audrey muttered under her breath, as she turned her car down a dirt road, cow pastures on her left, farmland on her right. It’s not that she’s unpatriotic, but the flag to her, especially since 9/11 has come to take on an heightened nationalistic symbolism, where anyone who is “other” isn’t welcomed. She got out of the car and left a package by a gate as cattle bleated in the background. Nothing happened, but she was tense, nonetheless.

And then there was the mishap at a sprawling mansion in Dublin.

She hauled out a 40-pound package and left it on the customer’s doorstep. But her app said she had gotten it wrong.

That shouldn’t have been a big deal. But Audrey was highly cognizant of what it looked like when she had to go back up the steps, retrieve the package, put in back in her car and deliver it next door.

“If the cops come,” she said with real fear in her voice, “they’re going to think I’m stealing. And that’s not going to be good.”