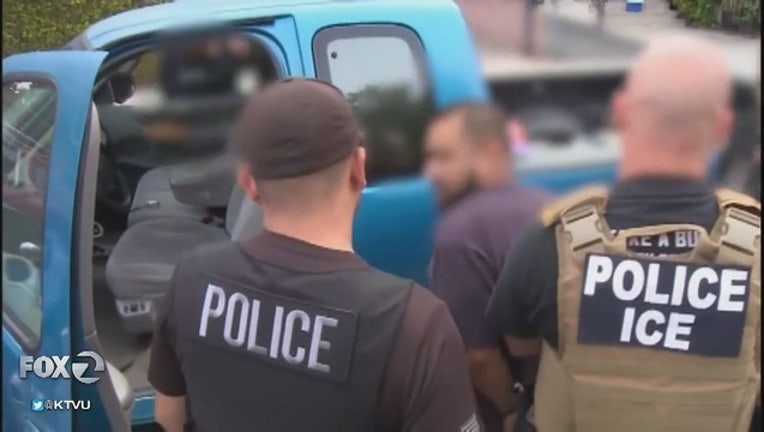 MORTON, Miss. (AP) - Mississippi residents rallied around terrified children left with no parents and migrants locked themselves in their homes for fear of being arrested Thursday, a day after the United States' largest immigration raid in a decade.

Immigration and Customs Enforcement officials said 680 people were arrested in Wednesday's raids, but more than 300 had been released by Thursday morning, ICE spokesman Bryan Cox said in an email.

Cox said 30 of those who had been released were let go at the plants, while about 270 were released after being taken to a military hangar where they had been brought after the raids. He did not give a reason except to say that those released at the plants were let go due to "humanitarian factors."

"They were placed into proceedings before the federal immigration courts and will have their day in court at a later date," he said. Officials had said Wednesday that they would release detainees who met certain conditions, such as pregnant women or those who hadn't faced immigration proceedings previously.

A small group seeking information about immigrants caught up in the raids gathered Thursday morning outside one of the targeted companies: the Koch Foods Inc. plant in Morton, a small town of roughly 3,000 people about 40 miles (65 kilometers) east of the capital of Jackson.

"The children are scared," said Ronaldo Tomas, who identified himself as a worker at another Koch Foods plant in town that wasn't raided. Tomas, speaking in Spanish, said he has a cousin with two children who was detained in one of the raids.

Gabriela Rosales, a six-year resident of Morton who knows some of those detained, said she understood that "there's a process and a law" for those living in the country illegally. "But the thing that they (ICE) did is devastating," she said. "It was very devastating to see all those kids crying, having seen their parents for the last time."

On Wednesday, about 600 U.S. Immigration and Customs Enforcement agents fanned out across plants operated by five companies, surrounding the perimeters to prevent workers from fleeing. Those arrested were taken to the military hangar to be processed for immigration violations.

In Morton, workers were loaded into multiple buses on Wednesday -some for men and some for women - at the Koch Foods plant. At one point, about 70 family, friends and residents waved goodbye and shouted, "Let them go! Let them go!"

A tearful 13-year-old boy whose parents are from Guatemala waved goodbye to his mother, a Koch worker, as he stood beside his father. Some employees tried to flee on foot but were captured in the parking lot.

Karla Vazquez-Elmore, a lawyer representing arrested workers, said even those not arrested were terrified.

The Rev. Mike O'Brien, pastor of Sacred Heart of Jesus Catholic Church in Canton, said he waited outside the Peco Foods plant in the city until 4 a.m. Thursday for workers returning by bus. O'Brien said he visited a number of parishioners whose relatives had been arrested, including a 65-year-old grandmother. He said he also drove home a person who had hidden from authorities inside the plant. "The people are all afraid," he said. "Their doors are locked, and they won't answer their doors."

Children whose parents were detained were being cared for by other family members and friends, Obrien said.

"They're circling the wagons that way and taking care of each other," he said.