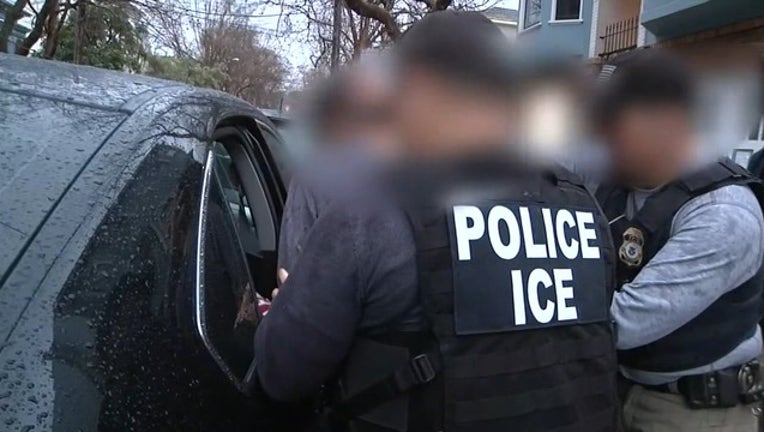 ICE agents arrest a man in Napa as Fox News gets an exclusive ridealong with agents. Feb. 27 2018

SAN DIEGO (AP) - Federal immigration officers arrested 115 people during a three-day operation in the San Diego area amid heightened tensions between the Trump administration and the state of California over immigration enforcement.

It was U.S. Immigration and Customs Enforcement's third California operation in barely a month, following one in the Los Angeles area that resulted in 212 arrests and one in Northern California that had 232 arrests.

The San Diego operation targeted 533 people who have been convicted or charged with a crime, have a judge's order to leave the United States or are known to have re-entered the country illegally after having been previously deported, said Greg Archambeault, San Diego field office director for enforcement and removal operations.

The agency's typical capture rate is about 30 percent in such operations, Archambeault said. Authorities said rainy weather and a decision to shorten the operation by one day - Tuesday to Thursday - kept a lid on arrests.

Teams of six officers in San Diego were each required to identify 100 targets for the operation, with priority given to those with the most serious criminal and immigration histories. Officers from Los Angeles, Phoenix, and Salt Lake City came to assist for two days.

Immigration officers generally don't have search warrants, and advocacy groups have advised people not to open doors voluntarily. In some cases, officers may be working off old addresses or the target isn't home.

In San Diego, a man with a history of child sex exploitation wasn't home when officers came with a search warrant early Thursday. Officers had trailed another man from the home but discovered in a vehicle stop that he was the wrong person.

The Northern California operation had 1,032 targets, including 232 arrested. According to Homan's account, all 800 who eluded capture were the mayor's fault. He didn't offer any other reasons.

The agency said 50 arrested in San Diego were convicted criminals, including a 43-year-old Mexican gang member guilty of grand theft, selling a controlled substance and driving under the influence and a 52-year-old Mexican with three convictions for spousal abuse. ICE didn't release names, citing privacy policy restrictions, making it difficult to verify the accounts.

The Trump administration sued the state of California this month in federal court over restrictions the state has put on state and local law enforcement agencies cooperating with federal immigration agents. ICE says limits on access to local jails will force it to make more arrests in the community.

Immigration operations are common across the country but the three in rapid succession in California came after Homan said he was devoting more resources to the state and warned that, "California better hold on tight."